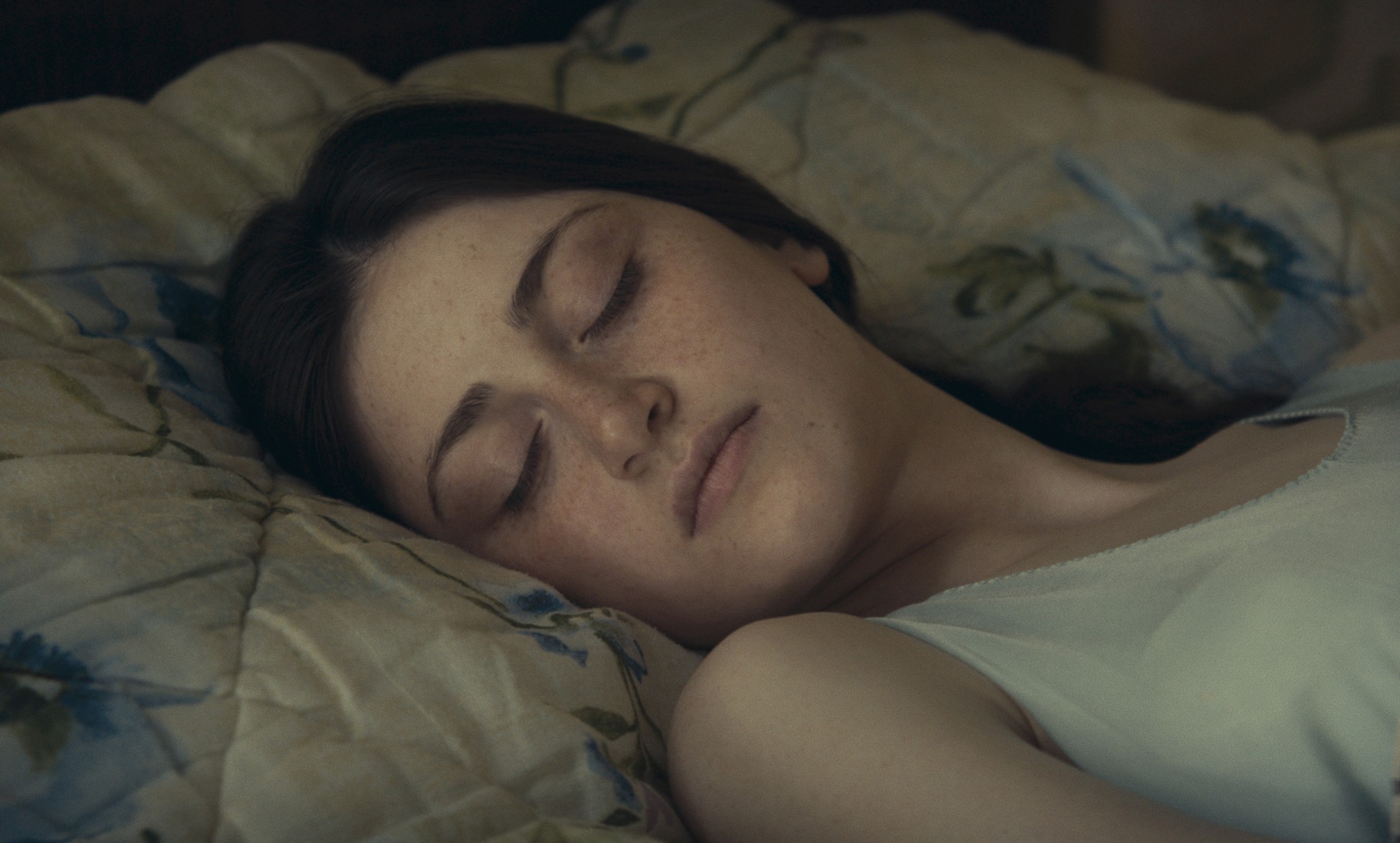 What did the drain pipe, the security camera, and the sapling say to the girl when she crossed the road? This is the set up, not of some shitty joke, but of a key scene of dramatic conflict in Alexandre Koberidze’s What Do We See When We Look at the Sky?. At the beginning of the film, Lisa (Oliko Barbakadze) and Giorgi (Giorgi Ambroladze) have an odd meet cute in the streets of the Georgian city of Kutaisi. They fall in love at first sight, arrange to meet at a cafe the next day, and forget to ask each others’ names. As Lisa heads home, the pipe, camera, and sapling decide to warn her of encroaching danger. As recounted to us by a narrator (voiced by director Alexandre Koberidze), they tell Lisa that an evil eye observed her meeting with Giorgi and has cursed them. The next day, she will wake up looking like a different person, and he will be unable to recognize her. But there was a final part of the curse that Lisa didn’t hear; the wind was supposed to tell it to her, but got cut off by passing cars. Unbeknownst to him, or to Lisa, Giorgi will also wake up looking like a different person. When they next see each other, they’ll see a stranger.

This odd love story—will Lisa and Giorgi find their way back to each other?—is the thread that loosely binds together this two-and-a-half-hour epic, which is more a portrait of a city than it is a romance. The film opens with several short scenes of young children leaving school, and it ends with a montage of beautiful images of people roaming the streets of Kutaisi. In between, when we’re not with Lisa and Giorgi, we’re treated to vignettes and anecdotes about city life, often narrated by Koberidze. For a film that begins with love at first sight and a curse, What Do We See When We Look at the Sky? surprisingly reveals itself to be about noticing and appreciating the little things, rather than life’s grand gestures.

Lisa and Giorgi’s first meeting is shot and acted in a way that undercuts its romance and makes it seem almost mundane. When they first bump into each other, outside the school gates, the camera focuses only on their feet. Barbakadze and Ambroladze read rom-com dialogue in flat, dispassionate tones, stripping it of its sentimentality. Later that night, they have another chance encounter outside of the school and decide to arrange a date the next day, because it must be fate. Koberidze shoots the scene at an extreme wide angle. Although we hear their conversation clear as day, they are just two tiny specs at the edge of the frame. It’s as if we’re watching from the perspective of Koberidze’s omniscient narrator.

In the press notes, Koberidze writes about the film’s intimidating length, positing, “How should I choose what things to write about and what things to leave out, thus giving more meaning to some things and less to others?” In order to give each moment, no matter how extraneous, equal weight, he strips the most traditionally cinematic scenes—like the meet cute—of their cinematic qualities. We’re already trained to see these moments as beautiful, so Koberidze sees no need to emphasise them. In fact, a lot of the most emotional parts of the film take place off screen, with Koberidze narrating the character’s emotions rather than showing them on the actor’s face. By contrast, Koberidze shoots seemingly ordinary scenes with love, care, and attention, spending lots of screen time on people and activities we wouldn’t typically stop in the street to look at. From patrons at a cafe, to stray dogs, to kids playing soccer, Koberidze’s camera has time for everyone, and it makes everything look beautiful.

Koberidze shows us various corners of Kutaisi, creating a map of the city through the people in it. Lisa (played by Ani Karseladze after her transformation) and Giorgi (now played by Giorgi Bochorishvili) both take jobs at the same cafe where they planned to meet up the day after they first met. They both hope that the other one will one day come and find them, not realizing that they work practically side by side. There are a few plot diversions—Lisa visits a woman that she hopes (in vain) can lift the curse—but the film is mostly observational, leaving Lisa and Giorgi for large stretches of time. Through narration, Koberisze walks us through the various bars and cafes where people (and stray dogs) prefer to watch World Cup soccer matches. He asks us to observe people attentively; in one conversation scene, he drops out all diegetic audio and focuses the camera on a single woman, who is chatting and laughing with her friends. We don’t know what she’s saying, but because it’s all we have to focus on, the details in her expression and the way she moves become almost sharper, and fascinating to watch.

Despite the film’s title, what Koberidze is really observing is what we miss when we look at the sky—when we rely on cosmic magic, searching for love and happiness in chance encounters rather than the reality of our everyday lives. Lisa and Giorgi wait patiently for the universe to reunite them, until they look around, and realize that the other one was there all along. More than a romance, or a fairy tale about sentient security cameras, What Do We See When We Look at the Sky? is an ode to living in the moment and finding beauty in the familiar. It’s an endurance test of a film, but one rich with detail, if you have the patience to look for it.

What Do We See When We Look at the Sky? premiered at the Berlin International Film Festival.