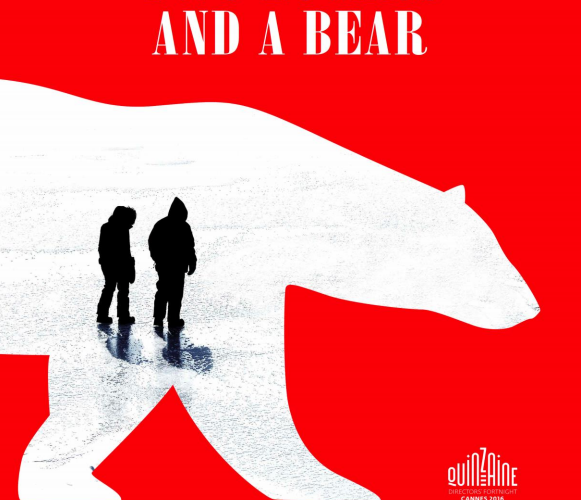 Kim Nguyen’s Two Lovers and a Bear is a film that suffers from a bit of an identity crisis. Like an indie playlist stuck on constant shuffle, unapologetically reveling in a sort of manic unclassifiable genre. This isn’t always necessarily a bad thing, but, for some reason, Nguyen’s scattershot tonal shifts — which hop between a romance on the rocks; a self-serious study of grieving; and a surreal buddy comedy — can prove quite jarring. The film is, at its core, a look at how we choose to deal with grief and past trauma. Whether that happens to be with booze, destroying an arctic outpost, or even talking to a deadpan polar bear is another matter.

Lucy (Tatiana Maslany) and Roman (Dane DeHaan) are two lost souls who have chosen a life at the end of the world, as Herzog might call it. They both work infrastructural jobs of some description in a small, isolated community near the North Pole. What it is that they do is seldom elaborated on. Roman is a man on the run from his past, while Lucy seems more concerned with what the present has to offer. Haunted by nightmares of her recently deceased abusive father, she longs for a life back in civilization and a return to university, where she hopes to study Biology. Roman has no intention of following her.

Roman is happy enough to wallow away in self-pity, shooting his rifle and hitting the bottle. He chooses to drink himself into oblivion one night when news of Lucy’s plans come through the grapevine. Lucy attempts to stir him, but to no avail, and soon he’s down by the bed with a gun in his mouth. A local policeman talks him down with the help of a box of beers. He later stumbles outside to shoot off a few rounds, but is met there by a roaming polar bear (voiced by Gordon Pinsent). The two characters have a friendly chat. They will do so again a number of times over the course of the film.

How much of this is a hallucination is difficult to judge. It appears that other characters can see the carnivore in close proximity to him but perhaps can’t hear his voice. Whatever the case may be, he’s a spirit animal of sorts for Roman, never short of sage advice or a deadpan joke, and stands as Two Lovers‘ most likable and underused character.

Roman and Lucy decide to break out on their snowmobiles and tackle the treacherous journey south, hoping to find peace. On the way they’ll have a crash, hit a blizzard, and find an outpost that hasn’t been touched since 1985. It’s probably been deserted since before they were born. Specters roam the hallways. It’s untouched, almost innocent. Somewhere to leave one’s past.

Surrealist flourishes aside, there are a variety of events here that may require the viewer to take more than a grain of salt. At one point, Lucy decides to break the window of Roman’s prefab, a frankly bizarre and quite mean act given the ludicrous sub-temperature climate. At another point, Roman drinks two liters of whiskey (why not just get one?) and somehow retains the ability to stand. The sex scenes are deeply uncomfortable. Such shifts to more serious, pseudo-grown-up fodder are probably enough to give the viewer whiplash. A dash of background info on either character probably wouldn’t have hurt, either.

It’s unfortunate, though, as Two Lovers and a Bear is at its most vibrant and enjoyable when Nguyen allows the surrealism to flourish. There’s a good film in there somewhere — one with fewer lovers and more bear, perhaps.

Two Lovers and a Bear premiered at the Cannes Film Festival. See our coverage below.