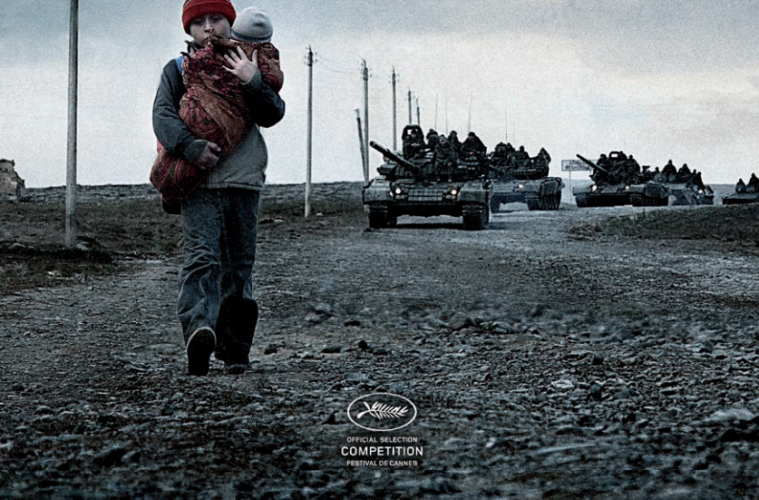 Let’s get one thing straight: The Artist was not an atrocity worthy of being labeled a war crime, no matter how much some made it out to be during Harvey’s Oscar run. The silent film parody from French director Michel Hazanavicius was exactly that — a parody, recognizable to anyone familiar with his two OSS 117 films. That is to say, Hazanavicius’s last three titles only commit the crime of being entirely admissible works without much under their surface.

The same could be said for The Search, except it’s also a Warner Brothers-produced epic war drama that carries a wallop of self-importance. As a remake of Fred Zinnemann’s 1948 Holocaust picture of the same name, Hazanavicius has adapted that original narrative to the 1999 Second Chechnya War. The film opens with low-grade digital video, the unseen recorder pointing their camera at a dead goat, asking, “What is this shit?” (Too obvious?) The footage continues as we see Russian soldiers mercilessly execute innocent victims that they claim to be terrorists, all shot in an “unflinching” style that is indifferent to this atrocity. That sense of indifference actually makes this iteration of The Search a slight improvement on the original material. Zinnemann’s film had an absolute faith in the goodness of the US military (communicated through an angelic voiceover), as well as now-uncomfortable pro-Zionist themes; Hazanavicius instead makes his film about the idea of conflict abroad, about trying to turn abstract crimes into ones that people can see, understand, and thus feel.  In place of Montgomery Clift’s do-gooder soldier we have The Artist star Bérénice Bejo as Carole, a Human Rights council activist developing a report about the ongoing atrocities. Carole believes that this statement, once presented to the Foreign Affairs council, will make clear that the UN’s refusal to take a stance in the ongoing conflict is not an anti-terrorist operation, but genocide.

But Carole can’t understand these things as long as she observes them in the abstract, so it takes a young, silent boy to open her understanding of the human costs of war. As is known to the audience (but not her), this young boy is Hadji (Abdul Khalim Mamutsiev), whose parents are the ones brutally slain in the opening minutes, and who now travels the country alone and fearful after abandoning his young brother with another family. Meanwhile, Hadji’s sister, Raissa (Zukhra Duishvili), who survives the attack, must locate her young brother in the midst of conflict, eventually coming into the hands of the tough-but-fair matriarch (Annette Bening) of a refugee orphanage located in the same town as Carole. Most of that material reflects what’s in Zinneman’s original film, but Hazanavicius, here also serving as writer, has added an entirely new subplot: the Full Metal Jacket-esque tale of a young soldier, Koila (Maksim Emelyanov), recruited into the Russian army and then berated, beaten, and abused to the point of near-death, all in order to train him into a monster. If the director’s approach to the main narrative is mostly tolerable do-gooder material, the real failure of The Search lies within this unnecessary subplot, which does everything possible to take a complicated matter and render it a simple one. Besides Koila, every soldier is portrayed as sadistic, racist, violent, homophobic — more or less inhuman. Worse than that, the Chechen terrorists they’re supposedly fighting never once appear onscreen, stacking an impossibly high deck against the Russian military. It’s a crass and cheap trick in a film that directly tells us to look past the surface of cynicism, yet won’t do so for the other side.

It’s not that Hazanavicius shouldn’t be a hopeful or sentimental director — he just shouldn’t be so obvious about it. Too often are Bejo and Bening’s characters directly stating both their feelings and the film’s all-important message over and over. Hazanavicius at least shows that he can direct without mugging for the camera and work at a large scale (some of the war footage is impressively shot, even if derived from every film of its stripe made since Saving Private Ryan). Those still in shock from his Vertigo rip in The Artist should be warned that he still remains an absolute disaster with music cues: a Bee Gees song as a moment of freedom arrives, and then an embarrassing montage of grotesque bodies set to Britten’s “Noye’s Fludde.” (Did he really enjoy Moonrise Kingdom?) It’s a big reminder that The Search has a lot of passion behind it, but little in terms of craft.