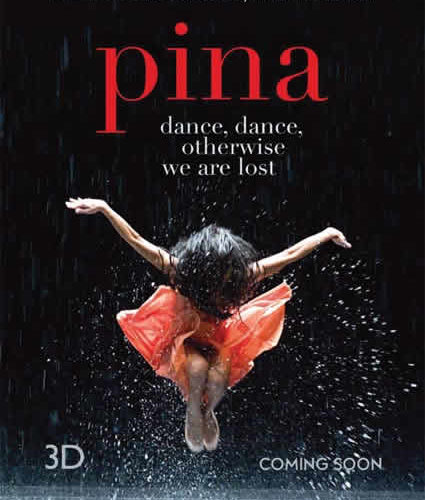 After watching Werner Herzog‘s Cave of Forgotten Dreams, a 3D film about prehistoric paintings in France, it became clear that perhaps there is an appropriate setting for the use of the often distracting and obnoxious technology. The documentary format at its essence is to transport viewers into experiencing other stories from around the world, while also educating audiences about the intended subject matter. In Wim Wenders’ new 3D documentary Pina, the German filmmaker has created a unique experience about the late avant-garde dancer Philippine “Pina” Bausch by filming members from her troupe performing her famous routines. It is a visual feast for the eyes as Wenders clever use of 3D only accentuates the natural beauty of the already awe inspiring dance choreography. For those completely unfamiliar with the name Pina, it’s worth doing a quick search to find some examples of her style, to familiarize yourself with what makes her so unique. If you’ve seen Pedro Almodovar‘s Talk to Her, then you’ve actually seen her performing one of her trademark routine. And if you’ve enjoyed anything you’ve seen from her, prepared to be wowed by Wenders homage, which covers the gamut of her body of work. Some of her best known routines include the melancholic Café Müller, in which dancers stumble around the stage crashing into tables and chairs, and the wondrous Rite of Spring, which demands the stage to be completely covered with soil. The themes of communication and dissonance between men and women are usually a central theme in her work.

Inter-cut between the dances are solemn portraits of the performers who worked directly under her and continue to keep her spirit alive with their dedication to her mantra. They each offer a personal tidbit about their experience with her, that adds a rich texture to understanding what made Pina so special. Each routine is shot with care and attention to the details of the movement and some are filmed in various German locations with rich textures that truly lend themselves to the 3D medium. There’s only a handful of vintage footage of the actual Pina teaching her students, but it doesn’t matter since she comes to life every time a dancer begins to move in her footsteps. Pina is a truly moving artistic experience that breathes new vitality into a lifetime of work from one of the most enthralling modern dance choreographers that you may have never heard of.