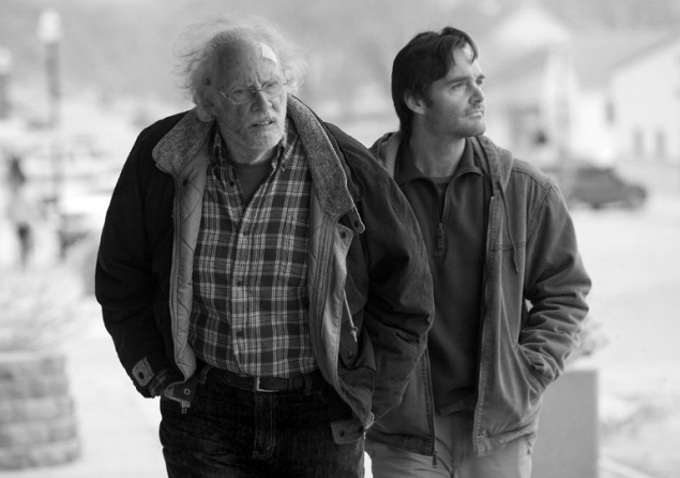 In following up his most commercially successful film to date, The Descendants helmer Alexander Payne has returned to the Midwest roots that, through Election, made him one of the more well-respected voices currently working in American comedy. Shot in stark black-and-white, the new feature, Nebraska is a quaint, simple story that’s wise enough not to pander to its audience, instead treating characters with care and, by viewing through a detached lens, a sense of reality in portraying their lives. Oddly straightforward and punctuated by humorous moments throughout, there is a droll clarity to the film that elevates the overall experience into a heartfelt, sincere drama. Despite its modesty, Nebraska succeeds several times over in giving a sense of place and depth to the sometimes desolate parts of middle America.

As scripted by Bob Nelson, the plot revolves around the relationship between a father and son living in Montana. Thinking he has won a million dollars in the mail, Woody Grant (Bruce Dern) is determined to travel to Nebraska to claim his prize — despite it being nothing more than a fantasy. The piece of paper is really just a meaningless sweepstake promotion, but Woody sees it as one last hope for salvation and happiness. Compelled by dementia to leave his home at odd hours in a fit of delirium, Woody is on the verge of an Alzheimer’s breakdown made worse by this obsession to leave his place of residence; realizing this may be the last chance to spend some time with his father before the need to place him in a nursing home takes over, Woody’s son, David (Will Forte), decides to take him on this trip. Driven by the need to disprove his father’s stubbornness, David indulges his father’s fantasy and drives him to the sweepstakes headquarters in Nebraska. Along this trip characters from Woody’s past emerge.

This nostalgic road trip, with its themes of about getting old and losing touch with reality, is a rather poignant subject which, crucially, Payne treats with proper care. Despite possibly skirting the line of parody at specific moments, the details of Midwestern life feel spot-on, and not for the sake of comedic moments which will undoubtedly recall a few of the director’s earlier titles, such as Sideways and About Schmidt. The black-and-white cinematography is beautiful, adding a fantastic texture to panoramic wide shots of farmland and small towns; populating the world are characters that color the film despite its monochromatic scheme. As Nebraska builds to an unexpected conclusion, it packs a walloping punch of emotion that, if you connect with, will leave you breathless by the end.

A humanistic filmmaker at his core, Alexander Payne continues his streak of creating films that plumb the depths of a character’s life while asking you to ponder your own. There is a familiar, stirring feeling to the way Woody cares for his father, giving life to the raw pain of seeing someone you love slowly slip away: Will Forte surprises in an excellent dramatic turn, while Bruce Dern’s work is reminiscent of Richard Farnsworth in David Lynch‘s The Straight Story.

Nebraska, ultimately, is a striking film for its simplicity and the manner with which it connects emotionally.