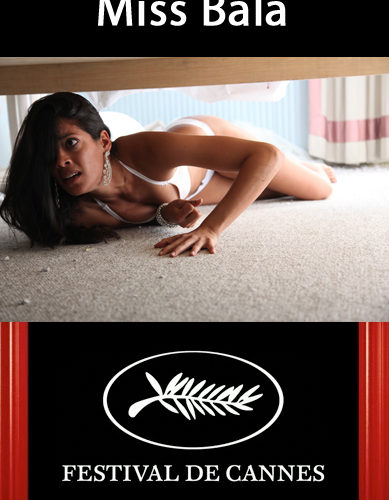 In a visceral manner, the Mexican thriller Miss Bala brings into focus a serious problem the country faces with the drug cartels. It centers on an young girl Laura Guerrero, played intensely by newcomer Stephanie Sigman, aspiring to become a beauty queen to win some money for her brother and father. Director Gerardo Naranjo displays a strong and confident cinematic voice with excellent use of carefully composed long shots that drive up the tension tenfold. Produced by the Y Tu Mamá También boys Diego Luna and Gael García Berna, the core of the movie is intended as a reflection of the times. By creating a character whose situations are impossible not to sympathize for, Miss Bala becomes a tour de force of action wrapped within the sub text of serious socio-economic issues. The title which translates to Miss Bullet, is a play on the beauty pageant award Miss Baja California and is a clever metaphor for the thrust of the film. Laura and her friend go to sign up for the competition and are aware that the system is corrupt. In order to succeed or have a chance at winning, they need to flirt with the people in control of the system and decide to head to a club filled with corrupt DEA agents. As the party starts to begin, a handful of armed drug cartel thugs infiltrate the nightclub laying waste to everyone in sight, except for the innocent Laura, who by chance is found by the rebel’s group leader Lino, played with calm menace by Noe Hernandez. But escaping the shootout and the influence of the cartel is not as easy as it seems, and pretty soon Laura finds herself descending down a rabbit hole of violence, drug money and indiscriminate death. The major strength of the film are it’s twists and turns, since the audience is on the same journey that Laura is forced to endure. Bouncing between the custody of Lino’s cold and calculated terrorist plots and the equally corrupt forces of the Mexican army, our beauty queen is subjected to some truly horrendous situations. In one riveting scene, Laura is caught in a shoot out that is reminiscent of the intensity of the Children of Men car scene. Naranjo is careful to balance these moments of intense violence with periods of calm uncertainty, leaving Laura’s fate to anyone’s guess. Thus an atmosphere manifests that anything terrible can happen at any moment and no one can be trusted.

Miss Bala does an excellent job of tackling a taboo subject rarely talked about in the mainstream media; the rampant lawlessness born from the drug trade that is fostered by both Mexico and the United States. In doing so, the Mexican filmmaker does a sensational job of crafting a film that walks the line of popcorn entertainment and serious relevant issues. The parallel between the lack of control that beauty pageant contestants must forgo in becoming part of the system is a clever metaphor for Laura’s dire situation. With the potential to be a big hit stateside, Miss Bala is a no-holds crime thriller that serves as a sobering reminder of the constant violence Mexicans are liable to experience on a daily basis.