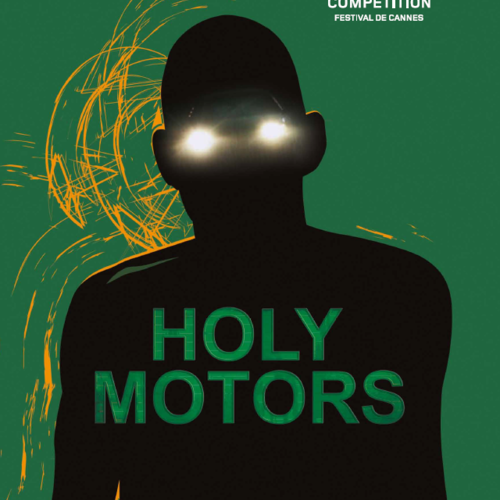 In Leos Carax‘s (Pola X) delightfully surreal Holy Motors, the filmmaker seems to be channeling the absurd sensibilities of Luis Buñuel in his prime. Having not made a feature film in almost a decade, the funky French filmmaker, who is already known for his somewhat bizarre cinematic sensibilities, seems to have completely eschewed the traditional rules of narrative film for something far more entertaining. Despite the seemingly endless randomness of each moment, there is a definite message about acting, directing and filmmaking as a whole. Featuring a series of outlandish vignettes strung together by an enigmatic chameleon-like lead character, Holy Motors is not only the most eccentric film at this year’s Cannes Film Festival, it’s also one of the best. The movie opens with a similar meta-shot of an audience as Michael Haneke’s Amour, showing a group of people quietly seated for an oncoming cinematic roller-coaster. Except in Carax’s version, everyone in the audience is sleeping, a deadpan one shot commentary about the state of our lackadaisical popcorn munching viewing habits. Carax actually has a cameo in this opening prologue, waking up in an apartment by an airport with wallpaper of a black forest that looks similar to the Radiohead album artwork for The King of Limbs. Using his deformed key finger to open a hole in the wall, he emerges in the very same theater to witness a naked baby walking down the aisles, followed by a slow motion shot of a menacing black dog. All this as just a prologue to the actual film that begins almost as bizarrely as this opening vignette.

Mr. Oscar (played by master of disguise Denis Lavant) is a wealthy businessman who travels in a stark white limousine, checking off a list of assignments that require him to inhabit different personas for some unknown reason. From dressing up as a beggar woman to becoming the father of a young girl, Oscar fully commits himself to these seemingly arbitrary characters. One scene involves him donning a mo-cap suit in a black light arena for a video game, resulting in some of the most mind-melting visuals committed to celluloid. Another totally ludicrous scene involves Oscar becoming a character from a pervious short film by Carax, who runs around a cemetery, eating flowers from headstones and then kidnaps Eva Mendes from a photo shoot. Kylie Minogue also has a musical sequence in the abandoned Samaratine clothing store in Paris. Yeah, this movie is completely insane. Holy Motors has so many “holy crap!” moments that it becomes a breathtaking spectacle to witness. Add to that a visual aesthetic that is superbly avant-garde, yet supremely cinematic, and you have a winning formula. And while it may be tough to pinpoint what exactly Carax is trying to say with the film, there’s definitely some interesting concepts to ponder about what it means to act and what it means to direct. At one point, Mr. Oscar discusses how me misses cameras, talking about how they used to be so big and now they are almost invisible. It’s an interesting metaphor about how the motion picture industry has evolved from the Lumière Brothers‘ cameras to 35mm to shooting video on an iPhone. It’s one of the random tidbits that will stick with you long after Holy Motors credits roll, a feat that proves Carax’s ability to create unforgettable imagery.