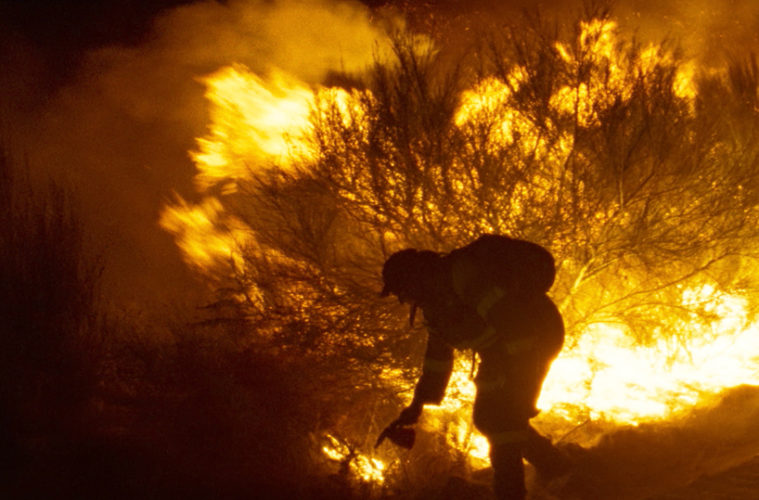 In the mountainous woodland of Galicia, northwestern Spain, fires mean extreme heat or lightning strikes, but sometimes they’re provoked. Political protest, corrupt politicians hoping to make a quick buck from clear-up contracts, or by people who just want to watch the world burn.

We never found out why–or whether–Amador (Amador Arias) committed the arson that sent him to jail, but when he leaves prison two years later, nobody’s there to meet him. He returns to his mother’s (Bendicta Sánchez) remote cottage and her three cows to tend to a quiet life. Only occasionally does he come into contact with outsiders, who whisper behind his back about a man who committed some long-ago crime after a difficult life, but for whom Amador still remains an enigma.

Director Oliver Laxe proved himself a great aueteur-in-waiting with his theological road movie Mimosas, which won Cannes’ Critics Week in 2016, but his latest, which premieres in the festival’s Un Certain Regard sidebar is too slight, too obscure to make it to greatness. Still, Laxe knows how to create a grounded, taut drama with a real sense of time and place. His opening sequence, a foggy, ethereal nighttime scene where diggers bulldoze giant Eucalyptus trees is infused with foreboding in a tangible natural terrain that towers over human activity. This is a region exposed to the elements, where people submit to nature as if it’s a greater power. Fire Will Come is, it should be no surprise, a prophetic title, and that’s part of the tension that Laxe carefully ratchets up. This is a stately film, sometimes to a fault, (even at 85 minutes some scenes seem overly drawn out) that builds slowly from silence to a crescendo, a natural disaster for whom Amador will become something of a sacrificial lamb.

Laxe paints Amador–a name that translates to “the one who loves”–as a compassionate man who keeps himself to himself, and there’s something pained in his expression, a weariness to express his emotions. The only person he opens up to, still in a limited fashion, is a friendly local vet (Elena Fernandez) who moved to the area while Amador was in jail, unaware of what the courts say Amador has committed. This is a world where the past is a burden, unspoken grudges are kept, and resentment simmers under the surface.

Laxe gets the best of his group of non-professional actors, taken from residents of his grandparents’ village in Galicia near where he grew up. The actor playing Amador himself was a forest warden, and his craggy face paints a picture of a man weathered against the elements. And just as the characters in this rural saga know they can’t beat whatever fate nature’s chosen for them, Amador knows there’s no getting away from humanity’s tendency to turn toward violence. Laxe is surely making some greater comment on today’s world of snap judgments–a mob rule by social media where guilt is presumed before innocence–but this impressive drama, based so effectively in the soil and dirt of this world far aware from metropolitan civilization, shows that this is a part of humanity that has never not existed.

Fire Will Come premiered at Cannes Film Festival and opens on May 8, 2020.