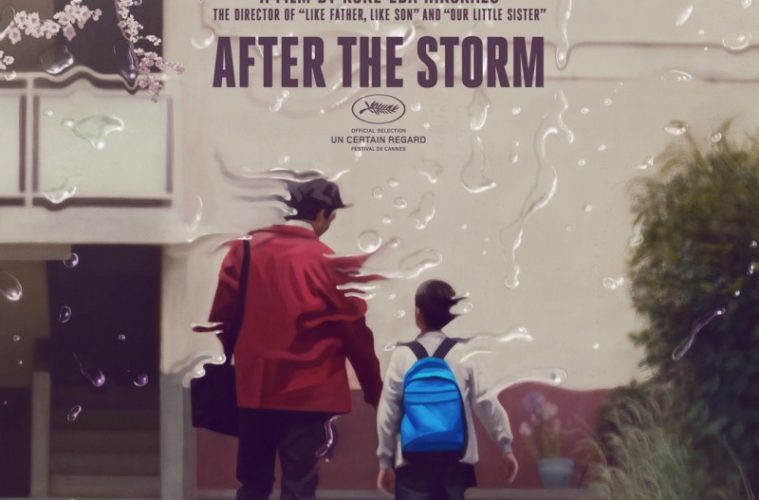 [Cannes Review] After the Storm

Can our children pick and choose the personality traits they inherit, or are they doomed to obtain our lesser qualities? These are the hard questions being meditated on in After the Storm, a sobering, transcendent tale of a divorced man’s efforts to nudge back into his son’s life. Beautifully shot by regular cinematographer Yutaka Yamasaki, it marks a welcome and quite brilliant return to serious fare for writer-editor-director Hirokazu Kore-eda following last year’s Our Little Sister, widely regarded as one of the slightest works of his career thus far.

Recent Kore-eda regular Abe Hiroshi plays Ryota, a prize-winning author struggling to live up to the success of his first novel. He’s a father of one, a gambling addict, and probably a bit of an asshole. We learn the man’s been researching for his follow-up book by moonlighting as a private eye. The job adds an extra layer of sleaze to Kore-eda’s character, but it’s surely the film’s most arbitrary plotline. It does, however, lead the man to spy on his ex-wife, Kyoko (played with great eloquence by Yōko Maki), who has begun seeing another man. This works as a not so classy catalyst for Ryoto, strengthening his resolve and giving him the impetus to rebuild his relationship with his only child. He only sees the boy once a month we learn and, bad news for Ryoto, he’s been doing just fine without him. Kore-eda has dedicated the majority of his career to examining this struggle between nature and nurture in middle-class Japanese families (Like Father Like Son, I Wish, Still Walking, Nobody Knows). We first meet Ryoto as he scours through his deceased father’s stuff while his mother is out. He finds a stack of old pawn slips and lottery tickets — an unfortunate hobby that we soon discover has been passed down. After the Storm is concerned with whether or not Ryoto’s son, Shingo (Yoshizawa Taiyo), will also take on this particular hobby, and whatever other traits — good or bad — his father might have.

The oft-referenced spiritual connection between Kore-eda and the late Yasujirô Ozu can be a little redundant at times, but it should not be disregarded. Ozu’s melodramas focused on the collateral effect of when a child flies the coop (Tokyo Story, Late Autumn, Early Spring, etc.), and he went about it with the repetition of a Zen artist — much like Kore-eda does now. His films prove that if you look at something for long enough, new and interesting things can become apparent. After the Storm is both the least-sentimental of the director’s nature-nurture films and the most profound.

In cahoots with Shingo’s grandmother, Yoshiko (Kiki Kilin), Ryoto orchestrates a dinner together with his son and ex-wife in his old family apartment. But a storm hits and Kyoko and Shingo are stranded, so they spend the night with Ryoto and his mother, opening old wounds and rehashing arguments. We’re asked to pity Ryoto’s conundrum, even as he threatens to impose his flaws on his only child. Lineage and legacy, a very Japanese concern, are on the mind here. “Why can’t men ever love the present,” an exasperated Yoshiko wonders aloud. It’s a moment so devastating you feel the scenery might as well crumble around her.

This is Kore-eda at his very best, facing up to the hardest truths with honesty and a nervous laugh — uncomfortable, invigorating, and ultimately cleansing, like the cinema’s equivalent of a cold shower. And I mean that in the best way possible.

After the Storm premiered at the Cannes Film Festival and on March 17. See our coverage below.