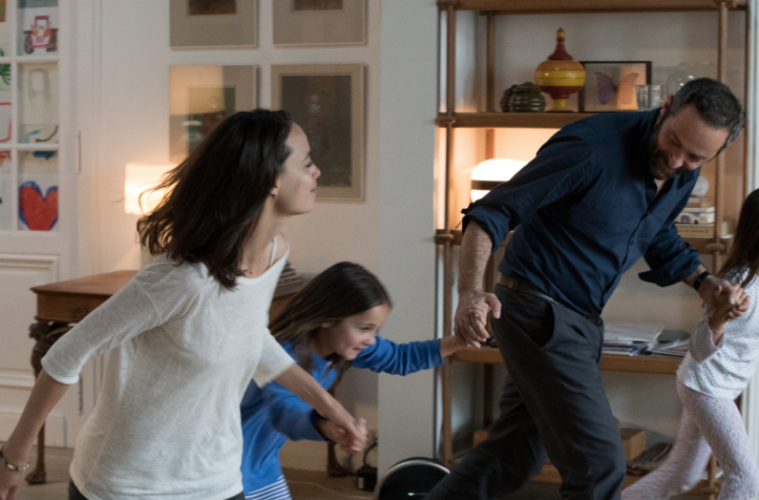 In the past, the Belgian director Joachim Lafosse made a film about a mother seeking escape from domestic hell by killing her four young children (Our Children), and one in which a teenager is tutored in the ways of sex by his adult friends, only to be raped by each of them in turn (Private Lessons). With these precedents in mind, it’s impossible not to be apprehensive about the fate of the two adorable twins in his new feature, After Love, which from the get-go are ensnared in their parents’ ferocious marital crisis. So here’s some good news right off the bat: the girls make it out of the film unscathed. In fact, no one gets assaulted or murdered or unduly traumatized in any other way. In this regard, After Love is an unusually moderate film by Lafosse’s standards. While it ultimately lacks some of the vigor of his previous work, it does allow you to leave the cinema without feeling ill, which is also nice.

After Love starts in medias res. When Boris (Cédric Kahn) arrives home in the film’s first scene, Marie (Bérénice Bejo) instantly snaps at him that it isn’t his assigned day to take care of the girls and that he shouldn’t be home before the evening. Unfazed, Boris shrugs and goes about his business anyway while Marie keeps hounding him, aggressively telling him off for any one of his actions and constantly trying to chase him out of the house. It’s an intriguing beginning, as the nature of their relationship isn’t at all clear. From listening to Marie, you’d think they were a divorced couple; from watching Boris, he might as well be an insouciantly invasive lodger with whom she happens to have children.

Their unremittingly vehement exchanges soon reveal that they are separated, but, finding themselves tight on money, they must first sell their apartment before they can go their separate ways. All except the film’s final ten minutes take place inside the large, beautiful apartment, and Lafosse lets his protagonists rage in his expertly crafted, exceedingly stifling huis clos. Both actors are excellent in their roles. Even though Marie and Boris are at each other’s throats almost without pause, their residual love for one another is always palpable, rendering their conflict fully believable and never less-than-fascinating to spectate. The meticulous script by Lafosse and his three co-writers prompts the viewer to parse each of their sentences for underlying meaning and backstory, maintaining a necessary level of ambiguity that constantly shifts the perception of who’s in the right and who’s to blame.

It is never explicitly revealed what caused the split in the first place, though a few loaded barbs from Marie — as well as a scene in which she loses her temper as he’s texting someone — seem to imply there may have been some infidelity on Boris’ part. However, this would merely have been the straw that broke the camel’s back. The more fundamental issue is one of social division: Marie is bourgeois and Boris is working-class. Throughout their 15 years together, Marie has always been the primary breadwinner, and this has fomented mutual resentment over time – from Marie for having to foot the bill and from Boris for being constantly reminded of this fact.

Thus, their fighting gradually assumes an allegorical dimension, with their home turning into a societal microcosm. The apartment belongs to Marie but the renovations made by Boris, a builder, doubled its value. The reason why they’re at an impasse, stuck in this unbearable situation, is that Boris wants half the proceeds from the sale of the apartment, which Marie won’t accept. She holds the capital; he doesn’t own the product of his labour – it’s the class struggle in a nutshell.

As a metaphor, After Love is much weaker than as a straightforward portrait of a modern marriage in crisis. Sadly, the balance eventually tips towards the former. It’s not wholly clear whether Lafosse wants to use a private relationship to illuminate the forces that drive capitalism, or vice versa. Either way, it’s a somewhat pointless parallel to draw. Not that the class struggle is no longer relevant — far from it — but the concepts outlined in The Communist Manifesto have evolved in the 168 years since the book’s publication and hardly apply in bullet-point form any longer. And anyway, at the film’s conclusion, all Lafosse seems to be saying is that the conflict is fated to continue unresolved, which feels like a rather roundabout way of stating the obvious.

After Love premiered at the Cannes Film Festival and will be released in the U.S. by Sundance Selects on August 11. See our coverage below.