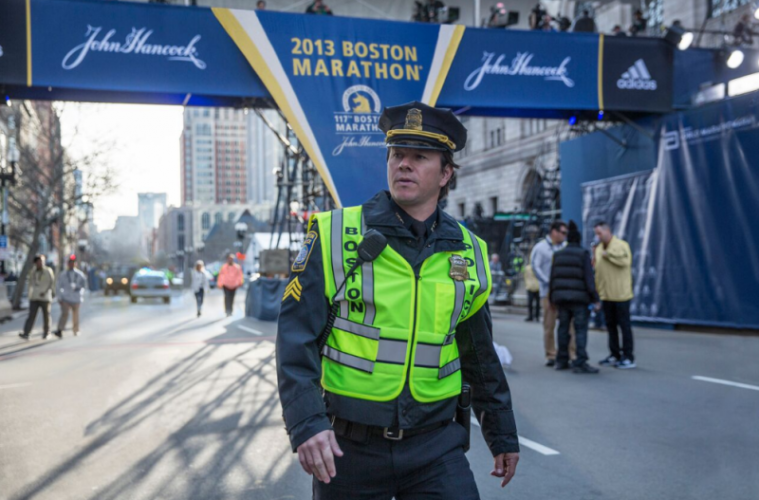 Their first film of the fall, Deepwater Horizon, wasn’t exactly a huge hit for Peter Berg and Mark Wahlberg, clocking in at a budget of around $110 million and not even reaching that mark worldwide. They are now back with a new drama, the more modestly budgeted Patriots Day. Centering around the Boston Marathon bombing in 2013, it specifically follows Police Commissioner Ed Davis (John Goodman) and officers under in his department such as Sergeant Tommy Saunders (Wahlberg).

Featuring a score from Trent Reznor and Atticus Ross (The Social Network, The Girl with the Dragon Tattoo, and Gone Girl), a new trailer has now arrived. With its bombastic score, the drama looks to be a mix of an intense thriller and uplifting drama about community and the human spirit, and with an AFI Fest premiere soon, we’ll find out if Berg and company pull it off. Also starring Michelle Monaghan, Kevin Bacon, J.K. Simmons, and Melissa Benoist, see the new trailer and featurette below.

An account of the Boston Marathon bombing, PATRIOTS DAY is the powerful story of a community’s courage in the face of terror.

In the aftermath of an unspeakable attack, Police Sergeant Tommy Saunders (Mark Wahlberg) joins courageous survivors, first responders and investigators in a race against the clock to hunt down the bombers before they strike again. Weaving together the stories of Special Agent Richard DesLauriers (Kevin Bacon), Police Commissioner Ed Davis (John Goodman), Sergeant Jeffrey Pugliese (J.K. Simmons) and nurse Carol Saunders (Michelle Monaghan) this visceral and unflinching chronicle captures the suspense of one of the most sophisticated manhunts in law enforcement history and celebrates the strength of the people of Boston. Patriots Day will open in Boston, New York, and Los Angeles on December 21 before going wide on January 13.