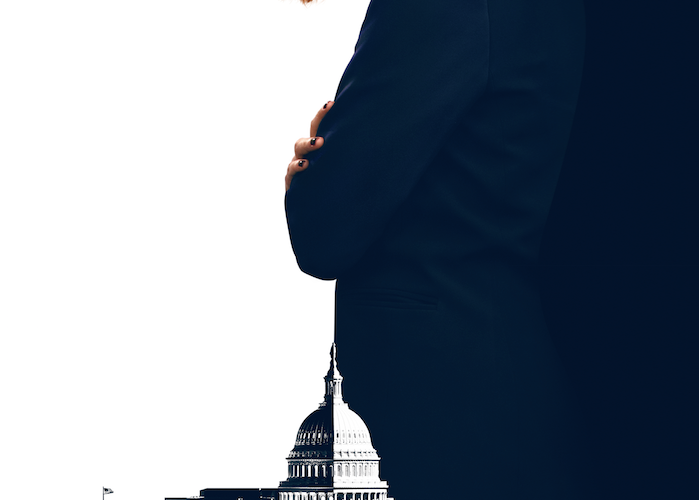 Miss Sloane seems custom-designed to forever go in the dictionary to illustrate the definition of “political thriller,” so thoroughly does it fit all the expectations of that genre. Director John Madden cribs directly from the Washington, D.C. cinematic playbook, mixing handhelds and back-and-forth dialog cuts overlaid with omnipresent blue and grey color tones. It looks and feels less like a film and more like a feature-length pilot for a new TV series which happens to have a stacked cast. Said show would pretty much be Scandal, only without the mad deep state subplot and with characters who are actually good at their jobs. The eponymous Sloane (played by Jessica Chastain) is America’s premier lobbyist, a Machiavellian political operator who can get any bill passed or defeated on behalf of her firm’s clients. She is not, however, an amoral gun for hire – she has convictions, and turns down a senator’s offer to help him defeat a new gun control bill. This catches the attention of third-tier nonprofit lobbyist Rodolfo Schmidt (Mark Strong), who offers Sloane the opportunity to instead work to help the bill pass. Thrilled by the challenge of going up against one of the strongest lobbies in the country, Sloane accepts, putting herself in direct opposition to her former high-powered firm. Much machinations ensue.

Miss Sloane cracks along at a good pace, though it would easily come in under two hours if it ditched an unneeded subplot about an escort (Jake Lacy) whom Sloane frequents. It serves to humanize her, to give her an easy way to reveal the cracks in her hyper-competent façade. She’s not perfect – she’s an insomniac who’s also on stimulants! She feels guilt about manipulating people (sometimes)! There’s a strange need now to try to curb our movie antiheroes, particularly female ones. Sloane can’t just be good at her job; she needs to be a personal wreck. She is the personification of the female failure to hit the “have it all” idealization (or the male perception of that, given the screenwriter). And yet at the same time she’s a “Yass Queen” – the film almost fetishizes how good she is at what she does. A better movie perhaps could have both, exploring the contradictions, but those qualities just sort of float by one another here.

But that’s only the second-biggest clash in Miss Sloane. The first is its bizarre attempt to be both cynical and optimistic at the same time – or more accurately, its attempt to be both savvy and anti-establishment but also to fete American politics for sometimes taking the right course. It intoxicates the audience with Sloane and co.’s political chess, only sometimes throwing up a reminder that “Oh right, it’s horrifying that a select few people decide what will happen on behalf of the wealthy, while elected officials consider the needs of their constituents a distant second or third.” But the film can’t have both and still expect to deliver a cogent idea. It perhaps could have worked if Sloane happened to deliver a good bill through nasty means, but even she and her profession are vindicated via some truly ridiculous last-act twists. If the message was that Washington only works for the good of the people in a fantasy, that would almost be subversive, but this movie is a crowd-pleaser through and through.

Perhaps a better television comparison for Miss Sloane would be the works of Aaron Sorkin, who loves loves loves writing about an elite few who work the system to affect positive change. The cast here certainly does a lot of walking and talking. But these kinds of stories can offer audiences nothing but a sort of helpless surrender to these elites. Leave it to the Yass Queens to make the world a better place – the system is too corrupt and complex for you. You might instinctually think that, given America’s current political situation, this film is ill-timed. But the truth is that even if liberalism’s own Yass Queen had been elected president this year, this would be just as much a hopeless story cloaked as a triumphant thriller. The awkwardly incorporated talking points about gun control thus are nothing but an awkwardly didactic reminder of how that issue is only certainly going to get worse moving forward.

Miss Sloane premiered at AFI Fest 2016 and opens in limited release on November 25.