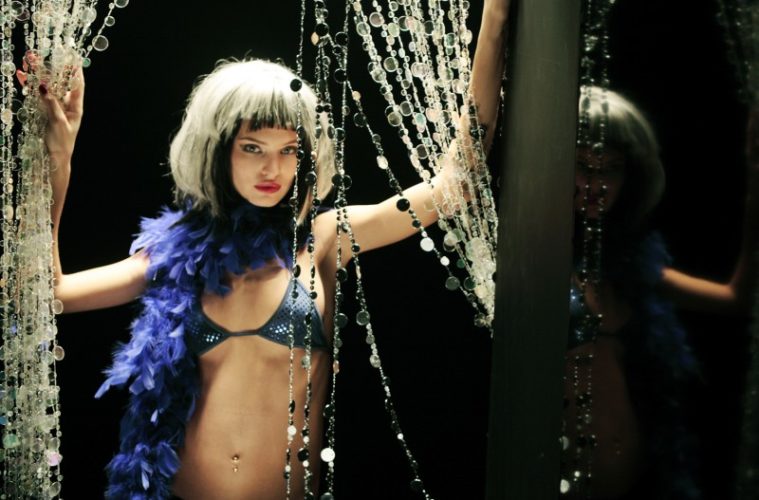 “Here in America there is no difference between a man and his economic fate.  A man is made by his assets, income, position and prospects.  The economic mask coincides completely with a man’s inner character.  Everyone is worth what he earns and earns what he is worth.  He learns what he is through the vicissitudes of his economic existence within capitalism.  He knows nothing else.”  – Theodore W. Adorno

The juxtaposition of the above image and quote exposes the central dichotomy of Abel Ferrara’s Go Go Tales — art and commerce, beauty and exploitation. This is set up immediately by the shots that bookend the film’s opening title card: Willem Dafoe quietly sitting and pondering the image of a ballerina, followed by an audio-visual overload of strip-teases and leering men stuffing bills in the strippers’ thongs. The first lines we hear are Bob Hoskins aggressively chastising a male customer: “Look, don’t touch.  You touch, you’re out.” This isn’t a rebuke to the prior images, but deliberate separation from something which, in contrast, now appears the unattainable ideal of art and innocence. This is Ferrara’s central motif, bodies and money, and the two shots by themselves give us skin commodified and uncommodified. But this juxtaposition subtly implies a thread that has been developing throughout Ferrara’s cinema, and will further develop here — from art as exploitation, to art is exploitation. Now they are separate: art needs exploitation in order to survive within capitalist culture.

Shot in Rome’s Cinecitta studios (doubling for New York!), this is the first time that Ferrara has set a film within an entire location, furthermore entirely on a studio set, so there’s a precision within this film’s controlled chaos through camera movement as opposed to montage alone. As Asia Argento noted at the films Cannes premiere: “He shoots with two cameras, on two different floors and he’s got two screens. You’re moving from one floor to another and into another scene. It’s complete madness, but he’s got it all figured out completely.” This film is dollies and crane shots galore, all swinging left and right, capturing a character before cutting to another character, the camera swinging in a different direction. Combined with the remarkable sound design, a mishmash of abstract sounds and music, this interplay of characters who all want different things from our protagonist, the one-and-only Ray Ruby (Willem Dafoe), facilitates the sense of the anxiety of economic instability — capitalism is trying to stay above water. But there’s something else about this studio: the disparity between where it was shot and where it’s depicting. As Dennis Lim mentioned in his 2007 interview with Ferrara: “Go Go Tales is a New York story — or, more precisely, a story about a classic New York fear and emblem of failure: being forced out of New York.” In this regard, the film is a bit like Chaplin’s A King in New York, another film about the United States made outside of it, because its lead architect too had been forced out the country. Chaplin’s perspective in 1957: all of America is advertising. Ferrara’s in 2007: now it’s just bodies for sale.

“Don’t worry: when that lottery goes off tonight, they’ll be dancing. We’ll all be dancing.” Like every Ferrara protagonist, Ray Ruby is an addict. His addiction is gambling, yet if it’s this addiction which perhaps defines him, it’s only one part of a whole: he’s an artist, a dreamer, a performer, a hustler, a businessman. In other words, he is Abel Ferrara (making this wonderful viewing alongside Ferrara’s recent full-on self portrait, Alive in France), but most telling is that, ultimately, money comes first. This is capitalism: you can hate money, but you need it to survive. This continues to fascinate. The above quote in this paragraph comes after Ruby dodges the landlord to bet even more money, in a last-ditch attempt to win the lotto to pay the workers. The lotto is a breathing metaphor for capitalism: you do what you can for finance, and when you’re losing it all comes down to chance. Is this financial irresponsibility, or the base nature of the system itself? Ray is pitching reality television shows and looking into record deals. He is a visionary, but a visionary working under the limits of enterprise culture, deeming to find a way to sustain oneself.

Nary fifteen minutes pass before Ferrara is at pains to remind us that these aren’t just bodies, but also workers. It’s vital that we, as a viewer, are reminded that we aren’t watching thematic outliers but human beings. And all the workers seem to understand something that Ray has yet to. As Nicole Brenez states in her excellent piece on the film, this is a “world where money rules without obstruction.” And its been 48 hours since that survival necessity has been refused. Ray has no money, is four months behind on the rent — this only accelerates his capitalist drive — he needs to survive, too, and he’s well in the rear in that regard. Part of Go Go Tales‘ brilliance is to portray Ray a bit ambiguously. Finding out one of the girls is in a locked room with a producer, Ray goes not to get the door unlocked, but to peddle an idea and note that the worker is signed to Ray’s supposed talent agency — this, after Ray tries to persuade another worker not to take time off for her pregnancy, or the general dodging of the workers for their pay. Screens are everywhere because security cameras are everywhere à la New Rose Hotel. But unlike that earlier picture, which, like THX 1138, posited a super-surveillance state where something only exists if it has been recorded, this film is a bit more materialist. Screens are fact, after all, and you have to keep your eye on your investment.

For all this supposed cynicism, Go Go Tales never comes off as such. The “twist” is that, on Thursday nights, Ray Ruby’s Paradise Lounge is a performance art space for all the workers, and soon everyone is a dreamer, an artist, uncommodified. But it’s the dichomity raised by all that comes before, that presents the central question: this art space was only possible by that exploitation, which is mirrored by a quick subplot wherein a young doctor is brought into the strip-club by a friend and becomes outraged to learn his wife is stripping, unaware that her performing is helping fund her husband’s getting through med-school. Yet somehow here we’re also working in a way that is slightly dialectical. Right before this incident we’re treated to a brief interlude of this “friend” relating a goofy story about Hillary Clinton; the film is packed with these improvisational exercises. In his interview with Lim, Ferrara brought up the Wooster Group, where Dafoe himself honed his skills as an actor. The Paradise Lounge is itself a kind of Wooster Group theatre every Thursday night, just as Ferrara uses Cinecitta as his own theatre, kicked out of New York — which is portrayed amusingly as a war zone between strip clubs on the other-side of the street, and any second your customers can be snatched away by a man in a crab outfit. One gets a sense that the making of the film itself is a kind of freedom from the constraints Ruby and his Paradise Lounge are facing — The Little Theatre of Abel Ferrara.

Ferrara’s subject, ultimately, is how this ideal, the vital innocence of dreams and fantasy, is opposed to the capitalist economics by which the world today runs. The only notion of plot in this film circles around a missing lottery ticket — distractions from innocence, beauty. We recognize that this innocence isn’t necessarily a naivete — or perhaps this naivete is the ideal itself, and there is pureness within the world. Mere seconds after the talent show, the club blasts back into the need for money — but we also must recognize that to make art, you need money. What’s remarkable is that Ferrara treats this a profound discovery. I wonder if its a deus ex machina that the ticket was in Ruby’s jacket the entire time? (After a monologue that is clearly a stand in for Ferrara himself.) Does it matter? All that’s left is a kind of sense, a mood: the images that follow the shot opening this piece are these:

If, at this moment, perhaps I’m thinking Go Go Tales may very well be Ferrara’s masterpiece, it’s because of all of the above — a fight for the uncommodified body. Yet the final sense one’s left with isn’t melancholy, but defiance.