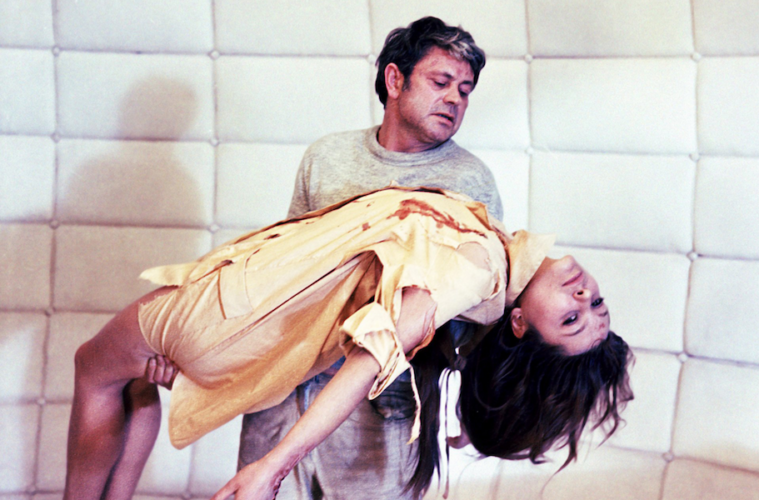 Now that most of the Cannes Film Festival 2016 line-up has been settled when it comes to new premieres, their Cannes Classics sidebar of restored films is not only a treat for those attending, but a hint at what we can expect to arrive at repertory theaters and labels like Criterion in the coming years.

Today they’ve unveiled their line-up, which is toplined by Bertrand Tavernier‘s new 3-hour and 15-minute documentary about French cinema, Voyage à travers le cinéma français. They will also be screening William Friedkin‘s Sorcerer following his masterclass. Along with various documentaries, both classics in the genre and ones about films, they will also premiere new restorations of Andrei Tarkovsky‘s Solaris, Jean-Luc Godard‘s Masculin féminin, two episodes of Krzysztof Kieślowski‘s The Decalogue, as well as films from Kenji Mizoguchi, Marlon Brando, Jacques Becker, Mario Bava, and more.

Check out the line-up below.

• Voyage à travers le cinéma français by Bertrand Tavernier (2016, 3h15, France).
“This work as a citizen and spy, as an explorer and as a painter, as a columnist and as an adventurer that have been described so well by many authors, from Casanova to Gilles Perrault, is not a beautiful definition of a filmmaker that we want to apply to Renoir, Becker, to the Vigo of Zéro de Conduite, to the Duvivier of Pépé le Moko, as well as Truffaut, Franju or Demy. To Max Ophuls and also Bresson. And to less known directors whom, during a scene or a film, sparkle an emotion, find some surprising truths. I would like this film to be an act of gratitude to all the filmmakers, writers, actors and musicians that have apparead suddenly in my life. Memory warms up: this film is a bit of coal for winter nights.”

A Little Bear-Gaumont-Pathé coproduction, with the participation of CANAL+, CINE+, of the SACEM. And with the support Région Ile-de-France, in partnership with the CNC. International sales: Gaumont. Distribution in France: Pathé. The film will be released in theaters in October 2016.

The American filmmaker will give the annual Cinema Masterclass hosted by film critic Michel Ciment on Wednesday, May, 18th. He will also introduce a restored surprise film at Buñuel Theater and Sorcerer (1977) at the Cinéma de la Plage.

• The Battle of the Rails opened this mini-retrospective and the Festival de Cannes has kept on welcoming the restorations of the films which won the Palme d’or. In 2016 we are going back to the year 1966 and its two winners, Pietro Germi and Claude Lelouch. They were awarded the prize by the jury presided over by Sophia Loren.

• Un Homme et une femme (A Man and a Woman) by Claude Lelouch (1966, 1h42, France)
Presented by Les Films 13. The film has been restored by Eclair laboratory in Vanves. It was scanned and color-graded from the original 35mm color and black and white negative with Claude Lelouch. It was digitally restored and finalized in 2K for the DCP. The sound was restored from the original mono magnetic 35mm.
Restoration and digitization with the support of the CNC.

A CROSSED TRIBUTE TO RAYMOND DEPARDON AND FREDERICK WISEMAN

• Faits divers by Raymond Depardon (1983, 1h30, France)
Presented by Palmeraie et désert with the support of the CNC. Original negative digitized and restored frame by frame in 2K by Eclair. Restoration and color-grading supervised by Raymond Depardon who will introduce his film before the screening.

• Hospital by Frederick Wiseman (1969, 1h24, USA)
Presented by Zipporah Films and Blaq Out in partnership with Doc & Film and UniversCiné, Hospital was restored in a 35 mm copy by the Library of Congress Audiovisual Conservation Center from original camera negatives in the Zipporah Films Collection.
Upon this occasion Frederick Wiseman will be present at Cannes and be awarded the Prix Consécration by France Culture radio station.

THE FIRST PRIZE OF THE FIPRESCI, UPON THE OCCASION OF THE CELEBRATION OF THE 70th ANNIVERSARY OF THE INTERNATIONAL FEDERATION OF FILM CRITICS

• Farrebique by Georges Rouquier (1946, 1h27, France)
Presented by Les Documents cinématographiques. The film was digitized and restored by Eclair with the support of the CNC. The 2K restoration has been made from a nitrate negative and nitrate interpositive. Cristina Martin at the Documents Cinématographiques coordinated and managed the project.

Cannes Classics programs documentaries as every year—a way to tell the history of cinema by cinema itself.

• The Cinema Travelers by Shirley Abraham and Amit Madheshiya (2016, 1h36, India)
Presented and produced and by Cave Pictures (India).
The portrait of a traveling movie theater in India, which continues to bear the magic of the images to a stunned audience, is faced with technological, numerous and complex changes. A projector repairman narrates film changes with poetry, philosophy and pragmatism.

• The Family Whistle by Michele Russo (2016, 1h05, Italy)
Presented by American Zoetrope, produced par Ulisse Cultural Association.
The Coppola family—their arrival in the US, their links with their native Italy and their relationship to music. A lot of interviews and malicious anecdotes from one of the greatest clans of today’s cinema. With Francis Coppola and Talia Shire.

• Midnight Returns: The Story of Billy Hayes and Turkey by Sally Sussman (2016, 1h39, USA)
Presented and produced by Midnight Return LLC, in association with Old Forest Hill Productions, Inc.
The story of the film Midnight Express by Alan Parker (1980) as told by those who made it: director Alan Parker, screenwriter Oliver Stone and producer David Puttnam. In parallel the real protagonist Billy Hayes discusses his personal journey and how his life has changed. Turkey, the image and the diplomatic relations of which were affected by the film, gives its point of view, as Billy Hayes tries to go back there to rebuild broken links.

• Bright Lights: Starring Carrie Fischer and Debbie Reynolds by Alexis Bloom and Fisher Stevens (2016, 1h35, USA)
Presented by HBO Documentary Films, produced by HBO and RatPac Documentary Films.
The life and intimate relationship of two actresses: Carrie Fischer, the heroine of Star Wars, and Hollywood legend Debbie Reynolds who starred in Singing in the Rain. The big story and the small story unfold before our eyes. A tender documentary on two golden ages of American cinema.

• Close encounters with Vilmos Zsigmond by Pierre Filmon (2016, 1h22, France)
Presented and produced by FastProd, Lost Films and Radiant Images with the participation of TCM Cinéma. To be released in French theaters.
The life of cinematographer Vilmos Zsigmond. From the streets of Budapest to Hollywood he describes his out of the ordinary journey. Many performers, including John Travolta and Nancy Allen, and famous cinematographers talk, question him and we discover a complete artist.

• Et La femme créa Hollywood (Women Who Run Hollywood) by Clara and Julia Kuperberg (2015, 52mn, France)
Presented and produced by Wichita Films and OCS.
Exploring the exciting stories of Lois Weber, Mary Pickford and Dorothy Arzner, we discover a passionate gallery of pioneers who also created Hollywood. What do they have in common? They are all women and they have all been almost forgotten.

• Bernadette Lafont et Dieu créa la femme by Esther Hoffenberg (2016, 65mn, France)
Presented and produced by ARTE France, Lapsus, Inthemood and INA.
A journey with Bernadette Lafont, the most atypical French film actress. The film sweeps her life and stunning artistic career.
Her granddaughters go back to Bernadette’s dreams and her friends Bulle Ogier and Jean-Pierre Kalfon evoke their artistic and human complicity.
Throughout the film Bernadette Lafont with her unmistakable voice of character actress weaves the movie of her life.

As every year Cannes Classics showcases around twenty restored prints. Extra attention has been paid to invite countries which had never been invited for their patrimonial work (Slovenia, Switzerland, Pakistan, Czech Republic, Cuba, Thailand, Hungary, and Poland). Watch out for rare gems! Also, we have great classics, film libraries and films which give us news.

• Ikarie XB 1 by Jindřich Polák (1963, 1h28, Czech Republic)
A presentation of the National Film Archives (NFA).
Source for the digitization were elements preserved in the NFA, image was digitized from the original camera negative and sound from the sound negative. 4K restoration made under the supervision of the NFA in the Hungarian Filmlab. The film was digitally restored within the project “Digital restoration of Czech film heritage” which was supported by a grant from Iceland, Lichtenstein and Norway and co-financed by the Czech Ministry of Culture. Project partners were the National Library of Norway and CESNET.

• Jago hua savera (Day Shall Dawn) by Aaejay Kardar (1958, 1h34, Pakistan)
A presentation of the Nauman Taseer Foundation. Image and sound restoration from the best elements possible, since the negative has disappeared, by Deluxe Restoration London. It was commissioned by Anjum Taseer.

• Santi-Vina by Thavi Na Bangchang (1954, 1h54, Thailand)
A presentation of Film Archive (Public Organization) in Thailand.
The original material of this film was considered lost. In 2014 the original material was found in the British Film Institute as well as the release print in the China Film Archive and at the Gosfilmofond in Russia. A 4K scan and restoration was carried out from the original camera and sound negatives found at the BFI. The restoration work was carried out at L’Immagine Ritrovata laboratory.

• Decakolog 5 (Thou shalt not kill) and 6 (Thou shalt not commit adultery) by Krzysztof Kieślowski (1989, 57mn et 58mn, Poland)
A presentation of MK2 and TVP. Restoration in 2K from original image negatives by TVP in Poland.
The color-grading of each episode has been supervised by the DOPs of the episode they photographed.

• Solyaris (Solaris) by Andreï Tarkovski (1972, 2h47, Russian Federation)
A presentation of Mosfilm Cinema Concern.
Digital frame-by-frame restoration of image and sound from 2K scan of the negative. Producer of the restoration: Karen Shakhnazarov.

• Valmont by Milos Forman (1989, 2h17, France)
A presentation of Pathé.
Restoration carried out by Pathé en 2016, made in 4K by L’Immagine Ritrovata laboratory, with the support of the CNC.

• Gueule d’amour by Jean Grémillon (1937, 1h32, France)
Presented by TF1 Droits Audiovisuels with the suppport of the CNC.
A 4K restauration from the original negative made at Hiventy.

• Indochine by Régis Wargnier (1992, 2h32, France)
A presentation of Studiocanal. Digitization from the original negative and restoration frame by frame in 4K by L’Immagine Ritrovata.

• Adieu Bonaparte by Youssef Chahine (1984, 1h55, France/Egypt)
A presentation of the Cinémathèque française, Misr International Films and TF1 Droits Audiovisuels. A restoration of Misr International Films and TF1 Droits Audiovisuels carried out by the Cinémathèque française with the support of the CNC, of the Fonds Culturel Franco-Américain (DGA-MPA-SACEM-WGAW), of the Archives audiovisuelles de Monaco and the Association Youssef Chahine. The works have been made from the image negative and the sound magnetic tapes at Eclair and at L.E.Diapason studio.

• Pit and The Pendulum by Roger Corman (1961, 1h20, USA)
A presentation of Alta Vista Productions and MGM Studios/Park Circus.
35mm archival print made in conjunction with the Academy of Motion Picture Arts and Sciences and producer Jon Davison from the original negative at Fotokem Los Angeles with Mato DerAvanessian and supervised by Roger Corman. Damaged shots were restored digitally and re-cut into the film.

• Rendez-vous de juillet by Jacques Becker (1949, 1h39, France)
A 2K restoration presented by Gaumont.
Image work made by Eclair, sound restored by L.E. Diapason with Eclair. The film will be released in French theaters and on DVD/Blu-ray.

• Terrore nello spazio (Planet of the Vampires) (1965, 1h28, Italy/Spain) by Mario Bava
A presentation by Fulvio Lucisano, Nicolas Winding Refn and CSC Cineteca Nazionale. The movie has been digitally restored from the original 35mm Kodak Eastman Color negative, courtesy of Italian International Film.
The color correction via colorimetry comparison of an original 35mm positive copy courtesy of the Cineteca Nazionale was carried out under the supervision of assistant director Lamberto Bava.
The digital intermediate process using 35mm Kodak polyester copies and 35mm color-positive copies by Fotocinema Roma in 2015.