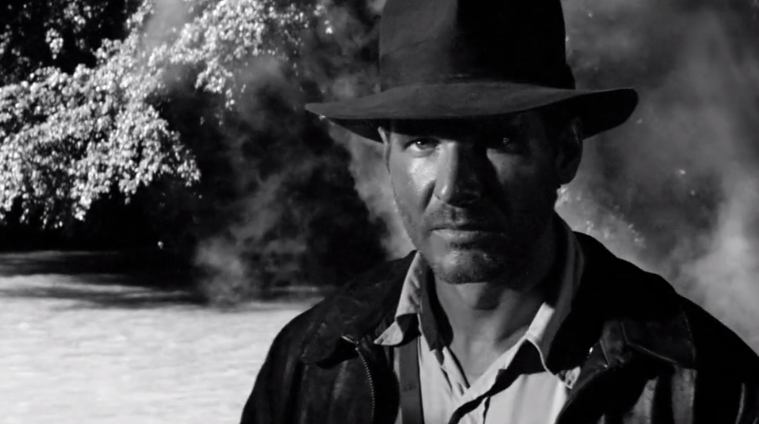 While one can currently find him experimenting in the world of television with The Knick, Steven Soderbergh has been continuing the fun on his personal site. After mashing up the different versions of Psycho and providing a new take on Heaven’s Gate, his next project is for Steven Spielberg‘s Raiders of the Lost Ark.

The director has adjusted the film to be in solely black-and-white with his own borrowed score (featuring bits from The Social Network, among other works) in order for viewers to only engage with the staging. Check out Soderbergh’s silent version below, following his explanation, by clicking the image or heading over to his site.

I’m assuming the phrase “staging” came out of the theatre world, but it’s equally at home (and useful) in the movie world, since the term (roughly defined) refers to how all the various elements of a given scene or piece are aligned, arranged, and coordinated. In movies the role of editing adds something unique: the opportunity to extend and/or expand a visual (or narrative) idea to the limits of one’s imagination—a crazy idea that works today is tomorrow’s normal.

I value the ability to stage something well because when it’s done well its pleasures are huge, and most people don’t do it well, which indicates it must not be easy to master (it’s frightening how many opportunities there are to do something wrong in a sequence or a group of scenes. Minefields EVERYWHERE. Fincher said it: there’s potentially a hundred different ways to shoot something but at the end of the day there’s really only two, and one of them is wrong). Of course understanding story, character, and performance are crucial to directing well, but I operate under the theory a movie should work with the sound off, and under that theory, staging becomes paramount (the adjective, not the studio. although their logo DOES appear on the front of this…).

So I want you to watch this movie and think only about staging, how the shots are built and laid out, what the rules of movement are, what the cutting patterns are. See if you can reproduce the thought process that resulted in these choices by asking yourself: why was each shot—whether short or long—held for that exact length of time and placed in that order? Sounds like fun, right? It actually is. To me. Oh, and I’ve removed all sound and color from the film, apart from a score designed to aid you in your quest to just study the visual staging aspect. Wait, WHAT? HOW COULD YOU DO THIS? Well, I’m not saying I’m like, ALLOWED to do this, I’m just saying this is what I do when I try to learn about staging, and this filmmaker forgot more about staging by the time he made his first feature than I know to this day (for example, no matter how fast the cuts come, you always know exactly where you are—that’s high level visual math shit).

At some point you will say to yourself or someone THIS LOOKS AMAZING IN BLACK AND WHITE and it’s because Douglas Slocombe shot THE LAVENDAR HILL MOB and the THE SERVANT and his stark, high-contrast lighting style was eye-popping regardless of medium. What do you think of Soderbergh’s experiment?