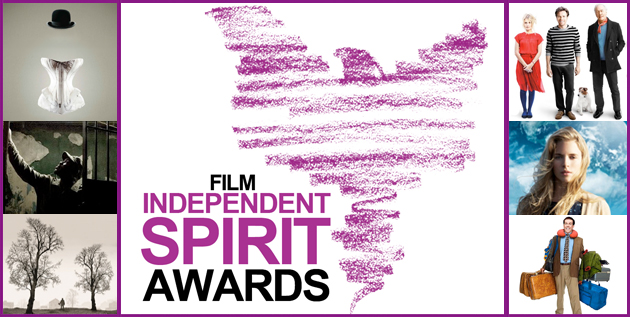 In last week’s column I considered the merits of some of this year’s most eye-catching debuts. This week, we’ll take a look at some returning Spirit honorees, as well as a striking doc and an enchanting ingenue that made their mark at Sundance last year.

The sophomore effort of writer-director Mike Mills (of the Spirit-nominated Thumbsucker) is a beautiful tangle of ideas and a muddled meditation on melancholy, mourning and mortality. With a winsome cast that includes Ewan McGregor, Mélanie Laurent, Spirit-nominee Christopher Plummer and a devastatingly adorable Jack Russell named Cosmo, Mills paints a tale late bloomers in love. At times it’s magical, but as the film unraveled into a meandering second act, I found myself wishing for more grounding, or plot, or substance in general. Still, Plummer is fantastic as a septuagenarian whose just come of the closet. When he’s told he has cancer, he decides not to mope but to embrace the time he has left with all the gusto he can muster. It’s inspiring without being saccharine and provides the film its only lasting impact.

Writer-director Oren Moverman first drew Spirit notice in 2010 with his harrowing directorial debut The Messenger. The film’s co-stars Ben Foster and Woody Harrelson reunite for Movesman’s follow-up Rampart, a cop drama that is a major step back. While Overman’s first effort was meandering and unbalanced, it did have a compelling emotional core and scored Harrelson his first Spirit Award for Best Supporting Male. This time around Harrelson’s up for his lead role, but it’s hard to imagine he has a shot as the film’s horrendous cinematography and cringe-inducing editing undercut his performance at every turn. The shots are thoughtlessly blocked, resulting in strained and bewilderingly bad dialogue being delivered as we stare at the back of someone’s head. The editing style is staggered with jump cuts in the midst of monologues that may mean to project the troubled protagonist’s disjointed world view but instead prove distracting and obnoxiously so. But Rampart‘s worst offense is that while it has an extraordinary cast that includes Robin Wright, Anne Heche and Cynthia Nixon, and a plot that dabbles in corruption, murder, cover-ups and conspiracy, it is painfully dull. Harrelson is an incredible performer, but this is not the best display of his talents.

To be frank, I’ve been avoiding actor turned writer-director Paddy Considine’s directorial debut. Why? I’d heard it was soul-crushingly bleak. And early reports did not disappoint. To give you an idea of how dark this Brit drama gets, let me tell you how the film begins: the protagonist, a perpetually furious, oft drunk widower (Peter Mullan) kicks his beloved dog…to death. Now, I’ve never walked out on a screening before, but if I hadn’t been seated in the middle of a row, I would have left about thirty minutes in, after another central character, this one a sweet and kind Christian (Olivia Colman), is literally pissed on by her abusive husband. Yet, I’m glad I stayed because amidst so much cruelty, the rare glimpses of tenderness in Tyrannosaur shine like a beacon. Sadly, these moments are fleeting and fragile, which also has a palpable impact. Ultimately, this is an undeniably hard to watch but powerful movie that I can’t imagine recommending to anyone.

This offbeat comedy follows the downward spiral of a sweet-faced manchild (Ed Helms) who over the course of an insurance salesman conference gets entangled in a drunken one night stand, corporate corruption, and some recreational crack-smoking. Man, if you thought a movie about insurance salesman couldn’t be interesting, well then…you’re pretty much right. Despite a great cast that includes Anne Heche, Isiah Whitlock Jr., Alia Shawkat, Stephen Root and Spirit nominee John C. Reilly Cedar Rapids never quite clicks. Mainly because tonally, the comedy is all over the place, sticking a naïve everyman (Helms) in the thick of much coarse and uninspired humor. For example, he works in Brown Valley for BrownStar Insurance, whose logo includes a brown asterisk. (Har har.) And as the film seems to attempt to switch from sweet to crass at breakneck turns, the often-awesome Reilly delivers a performance that comes off as equally unbalanced. In some scenes he’s playing his drunken, divorced deviant Deansy with a broad abandon, while in others he awkwardly attempts to be poignant while spewing horrific insults about his ex. As much as I admire Miguel Arteta’s earlier efforts (Chuck & Buck, Youth in Revolt) this outing is just a mess.

The follow-up to Rodrigo Garcia’s Spirit-nominated drama Mother and Child is Albert Nobbs, a saccharine tale about a woman who lives as a man in 19th century Ireland. Glenn Close got early Oscar buzz when photos of her cross-dressing character hit the web, but all that talk was wildly unwarranted. Close is consistently outshone by Spirit nominee Janet McTeer who plays another woman who masquerades as man to make a living. While Close is cringe-inducingly awkward in her portrayal, McTeer is solid, engaging, and spirited. From the moment she reveals her secret by flashing her big, bare breasts, she infuses the film with some much-needed life. On the other hand, Close is frightfully terrible here, failing to paint a compelling portrait of an underwritten character. Lazy screenwriting leads to the highly secretive Nobbs counter-intuitively musing his innermost thoughts aloud. Addditionally, Close’s romance with co-star Mia Wasikowska is unbelievably awkward. While there’s some wonderful character work from Brandon Gleeson and undervalued character actress Maria Doyle Kennedy, much of Nobbs is ponderous, sentimental and dull. But worst of all, Garcia’s feeble attempts at humor make his hero/heroine seem like a joke. Frankly, I’m baffled that this got a GLAAD Award nomination. And don’t get me started on Close’s Oscar nod.

Another Earth ~ Directed by Mike Cahill

Enchanting ingenue Brit Marling dazzled critics at Sundance last year in this character-driven drama with a stimulating sci-fi twist. When a new planet emerges into view of Earth that appears to be a mirror of our planet, the promise of the path unchosen or life unlived becomes intoxicating to two strangers irrevocably bonded by a shared tragedy. While narrative newbie Mike Cahill sometimes struggles (the cinematography is painfully peppered by quick zooms, amateurish handheld shots, and too much slo-mo), Marling creates a vivid portrait for her sparely written character that is entirely captivating. It’s a breakthrough performance that’s hard to forget, and it’s a shame she didn’t get an acting nod here. Still, she and Cahill have a solid shot at the Best First Screenplay honor.

This harrowing and thought-provoking documentary centers on one of the most curiously captivating figures of the Liberian Civil War, a conflict that lasted 14 years and resulted in 250,000 deaths. General Butt Naked, the leader of a merciless brigade of boy soldiers who massacred men, women and children, has confessed to being personally responsible for more than 20,000 deaths. Think about that a moment. For me, that number became less abstract when I realized that would mean 4 out 5 of the people from my hometown would be no more. To call this admittance shocking is an understatement. More rattling is that the man who once considered himself invincible, blessed by God to slaughter his enemies without armor and literally naked, is now a Christian and a preacher who calls himself Joshua Milton Blahyi. Documentarians Daniele Anastasion and Eric Strauss follow Blahyi on his quest to face his victims–or mostly their still-grieving families–and confront his sins. Blahyi is a charismatic figure, and it’s easy to see how his prowess as a preacher would have translated to brainwashing young boys to leave their families and kill on command. His sway pulls in all around him, even those he’s personally crippled. Yet Anastasion and Strauss never seem fully entranced, as keen cinematography clues us in to Blahyi’s self-serving motivations and masterful showmanship. Like many Spirit nominees, this doc is–at times–hard to watch, but what keeps us anchored in is Anastasion and Strauss’ acute awareness of Blahyi’s non-apologies and politician-like saavy. The Redemption of General Butt Naked displays not only the cruelty and mayhem man is capable of, but also his drive to survive and the depths of human forgiveness, though only some of these themes arise from the film’s slippery central figure.

State of Mind: I’m not going to lie: this week was rough. Between movies I had anticipated that proved disappointments and movies I had feared proving even bleaker than expected, this was a screening slate that battered my psyche. The only films here I’d wholeheartedly recommend are Another Earth and The Redemption of General Butt Naked. They are both thought-provoking insights into humanity that tackle issues of carnage and redemption but to very different but totally fascinating ends. Simply put, seek them out.

Check back next Tuesday, when Kristy will discuss: Natural Selection, Think of Me, Circumstance, The Off Hours, The Kid With a Bike, The Interrupters, and Midnight in Paris.