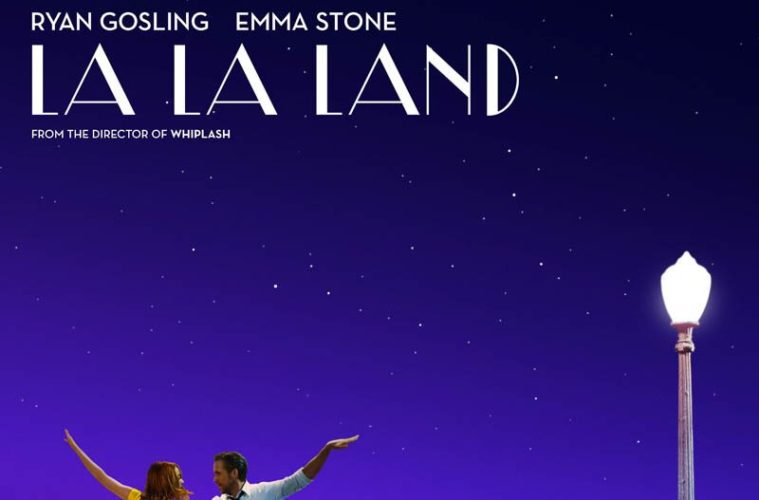 There’s a great recurring gag in Whiplash director Damien Chazelle’s La La Land — a beautiful, audacious, aesthetically vibrant, and enchanting contemporary musical — when Ryan Gosling’s struggling musician, Sebastian, throws a few disparaging comments towards a samba/tapas joint that has taken the place of a legendary jazz club. Sebastian refers to this juxtaposition as a joke on history; La La Land is a film obsessed both with juxtapositions and jokes on history. It’s a twinkling surface examination of how humans try to coordinate their dreams with their reality (a very Hollywood conundrum), but also a celebration of just how wonderful old filmmaking techniques and emotions look and feel on modern L.A. streets. Chazelle opens with a flurry of juxtaposition as a hot and stuffy freeway pile-up bursts into a raucous introductory number. It’s a tune about the sun, but we’re soon told that it’s winter. Motion bursts from stillness; color from concrete. It’s as if the dancers from West Side Story have walked onto the set of a Shane Black movie. It’s a banger, as openings go, and it’s here that our lovers first encounter one another. We’ll have to wait a while until they properly meet.

Emma Stone plays Mia, a struggling actress who serves coffee on the lot of a major motion picture studio. Sebastian is a jazz pianist who pays the bills playing background jingles in a restaurant run by a hard-nosed cynic (played, of course, by J.K. Simmons). Mia’s wall is covered in a mural of Ingrid Bergman. Sebastian drives a classic car and listens to LPs. Their dreams and passions might have already passed their sell-by date — one of La La Land’s great themes. Sebastian and Mia, like a ‘50s screwball, are shown to wind each other up from the get go. Mia falls for Sebastian when she sees him let loose on the piano — and subsequently get fired and storm past her — but their first conversation only comes when Mia finds him at a party playing keyboard guitar for an ‘80s cover band. The two walk home together and burst into a song titled “What a Waste of a Lovely Night.” Of course, we know the contrary is true. The main catalyst for romance comes when Sebastian takes Mia to a local jazz club to see some live music. She’s skeptical at first but is soon convinced. A jazz drummer and self-proclaimed film buff, Chazelle seems keen to convince his audience that passion can be infectious. It’s difficult to disagree.

The couple will later rendezvous at a screening of Rebel Without a Cause, but their date is cut short when the celluloid combusts (sell-by date passed indeed). They decide to drive to the Griffith Observatory where Nicholas Ray shot two of Rebel’s key scenes. Their love affair peaks in the beautiful art deco building, with Mia and Sebastian enjoying the film’s most subtly choreographed dance, which Chazelle doubles down on with a slightly hammy outer-space sequence. Gosling, a professional musician, takes to each musical scene with tremendous ease. Stone appears only slightly less experienced, but the delicacy of her voice and movement is nothing if not endearing. This is Gosling and Stone’s third collaboration and surely no other A-list pairing working today rivals their onscreen chemistry. Frequent David O. Russell collaborator Linus Sandgren shoots each number with tremendous kinetic energy — his camera seldom static — as the primary colors of Mary Zophres’ costumes clash vibrantly with the color palette of pastel purples and blues. Presumably given incredible free reign, composer Justin Hurwitz gives sweeping cinematic scope to his usual ratatat jazz drums and piano keys.

From here the film, for a time, seems to sober up. With Sebastian on tour with John Legend’s questionable jazz-pop-electronic-whatever fusion group, our lovers see less and less of each other. Mia leaves the coffee shop to write a play. Ingrid comes down from the bedroom wall. Color and song fade soon after and a redundant sense of melodrama seeps in. As anyone who saw Whiplash can attest, this director knows how to end a film. La La Land is no different. The spell is temporarily broken, but what a spell it is! Chazelle, like the great Hollywood musicals this film often succeeds in emanating, is not afraid to wear his heart on his sleeve. At the climax of Mia and Sebastian’s first dance together — perhaps the film’s finest sequence — the camera cranes up, just like it did when Gene Kelly spun around in Singin’ in the Rain. This is no pastiche. That Stanley Donen masterpiece is over six decades old. The beauty of La La Land is showing that, amongst other things, the combination of bodies in motion, a craning camera, and soaring strings can be just as electric after all those years.