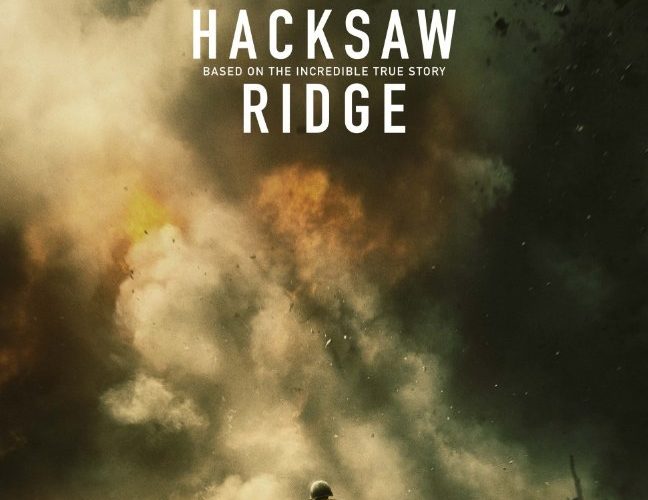 Mel Gibson is back in the director’s chair after a decade to remind us, in his own devout way, that war is hell and faith is good. Hacksaw Ridge, his new World War II epic, is not concerned with politics — it is concerned with soldiers, and one soldier in particular: a 7th day Adventist and conscientious objector named Desmond Doss who went to Okinawa as an army medic but refused to carry a rifle. This was much to the chagrin of his commanding officers and his brothers in arms. While derivative and endlessly cheesy, it’s a characteristically visceral return for Gibson, and one that confirms that little has changed in the man’s singular artistic psyche.

Andrew Garfield stars as the sympathetic lead and the director paints it by numbers: his sun-kissed early years in small-town Lynchburg, Virginia; falling in love with a local nurse; signing up to the military after Pearl Harbor; trying times in boot camp; and the horrors of the battlefield. A formative early scene shows a young Doss scrapping with his brother in their front garden. Pinned down, the boy swings a brick at his brother’s head, immediately knocking him out. His parents scold him as, teary-eyed, he gazes at the painting of the Ten Commandments, and particularly number VI: Thou shalt not kill. You might see where this is going.

These early scenes are about as rudimentary as stock photos. The film does find footing, however, when Doss eventually enlists. Again, we’re in familiar territory — a comical hard-ass drill instructor, privates with catchy nicknames, macho banter, and silly bravado — but Doss’ pacifism allows for new shades of heroism to surface and the cast members (especially Vince Vaughn’s Sergeant Howell) all play it very well. Doss’ rejection of any firearm means he must work harder and take more shit to earn respect. “A unit is only as strong as its weakest member,” Howell tells us. Garfield’s plucky smile is on hand to remind us exactly which recruit is the strongest.

Gibson comes into his own in scenes of combat. Whatever one might think about the man, he really can orchestrate the most gratuitous levels of chaos. Hacksaw’s scenes in Okinawa are a staggering example of controlled operatic violence, something in between the surrealist horror of Tsukamoto’s Fire on the Plain and the poetic grit of Saving Private Ryan. The dizzying common thread of almost all of Gibson’s films has been his ability to shoehorn his pious Christianity into such scenes of utter madness.

Ridge is based on a true story, and private Desmond Doss did indeed save a lot of people. The man wholeheartedly thanked God for it afterward, so it would be unfair to chastise Gibson for doing the same. What’s difficult to ignore, however, is that Hacksaw is a film that has Christianity (quite explicitly) win the day over a religion that the film portrays to be at best worn out and at worst barbaric. Indeed, for this reason alone, Hacksaw Ridge could be placed alongside The Passion of the Christ and Apocalypto as some sort of victorious Christianity trilogy.

Likely giving fuel to his detractors, Gibson’s stubbornness also remains. In a WWII film that lasts 131 minutes, the word “fascism” is glaringly conspicuous in its absence and the closing shot is so audacious it would put Apocalypto’s arriving conquistadors to shame. None of this is to say that Hacksaw is anything short of a thrilling mainstream war film, laden with broad emotional strokes. The characters are clichéd, but also funny and sympathetic, and we’re given enough of a reason to root for them amongst all those glorious flames and blood and grit. Hacksaw Ridge is a riveting, maddening, and singular return for the director whose character is often inextricably tied with his art.

Hacksaw Ridge premiered at the 2016 Venice Film Festival and will hit theaters on November 4.