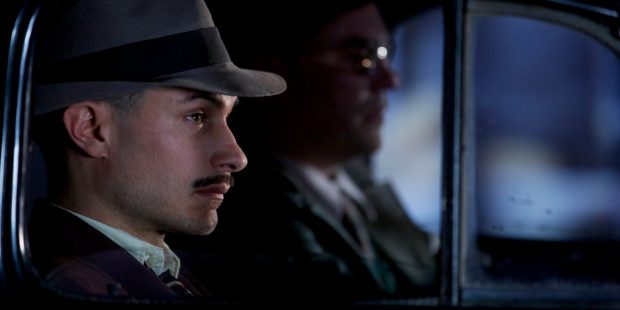 Big times, these are, for Pablo Larraín. The highest-profile Chilean filmmaker of this generation will have two — that’s two! — features open in the United States in as many weeks this coming December, and we happen to think both are pretty good. The first, Jackie, is bound to receive more notice for being an English-language, star-driven film about a distinctly American figure — notice that it deserves. But let’s not forget Neruda, a cops-and-robbers-esque picture in which the filmmaker does no less than “[invent] a new form of cinematic poetry by channeling the creativity of his subject.”

A peppy, visually resplendent trailer has been released ahead of its release. This probably only scratches the surface. We now turn to our review from Cannes: “As radical a reinvention of the biopic as Todd Haynes’ I’m Not There, Neruda is Larraín’s most conceptual and also his most demanding film yet. Like Haynes, Larraín attempts to create a hybrid between his subject’s art and biography, and, like Haynes’ film, Larraín’s is generally more fascinating than it is enjoyable. A crucial disadvantage of Neruda that will make it even more difficult for most is that few non-Chilean viewers are likely to be familiar enough with Neruda’s life and work to fully appreciate Larraín’s portrait of this important artist and historical figure.”

Beloved poet Pablo Neruda (Luis Gnecco) is also the most famous communist in post-WWII Chile. When the political tides shift, he is forced underground, with a perseverant police inspector (Gael García Bernal) hot on his trail. Meanwhile, in Europe, the legend of the poet hounded by the policeman grows, and artists led by Pablo Picasso clamor for Neruda’s freedom. Neruda, however, sees the struggle with his police inspector nemesis as an opportunity to reinvent himself. He cunningly plays with the inspector, leaving clues designed to make their game of cat-and-mouse ever more perilous. In this story of a persecuted poet and his obsessive adversary, Neruda recognizes his own heroic possibilities: a chance to become a symbol for liberty, as well as a literary legend. Neruda will begin its U.S. release on December 16.