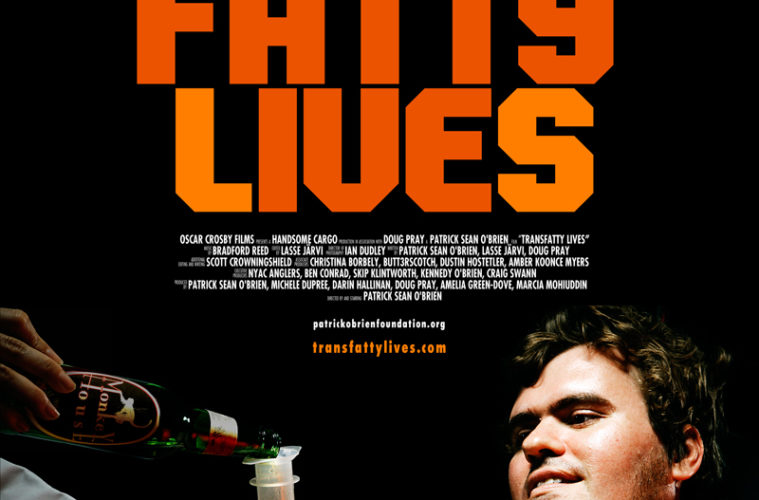 TransFatty Lives is a stunning personal documentary directed by Patrick O’Brien aka DJ Transfatty, an artist/filmmaker living with ALS. Produced, written and co-edited by Doug Pray, known best to me for his transcendent musical documentary Scratch and his documentaries about artists, he’s intensely interested in the process. Here he transforms O’Brien’s material into an accessible and inspiration work, carrying on the legacy of his lost voice. At age 30 O’Brien is diagnosed with ALS and given 2 to 5 years to live. Despite what is a remarkably true to life “death” scene allowing him to reflect on mortality, he lives. As a performance and conceptual artist, he’s intent on making the best of his situation in the process. Commenting upon nostalgia through his essays and internet videos, he’s given voice to the issue far beyond dumping a bucket of ice water on your head.

Shot on a variety of formats, the footage consists of video diaries and early films. The project starts with O’Brien’s obsession with nostalgia. As a native son of New Jersey, he turns his lens on a Howard Johnson’s restaurant in Asbury Park for an experimental work exploring the town that inspired Springsteen’s My City of Ruins. Weaved throughout this passage is commentary on his life from those that love him. Thankfully this mode of storytelling doesn’t stick around for very long, as if TransFatty is bored by the conventions of this kind of documentary, giving the picture a punk edge.

Compelling and engaging, the film grows ironically stronger as O’Brien grows weaker. There are minor triumphs along the way, including a marriage to a supportive woman and the birth of his son, Sean. As his health declines, his voice-over transitions to the text-to-speech machine he uses to communicate by moving his eyes once he loses the ability to talk. Throughout his journey there are difficult decisions to be made and the level of intimacy is powerful. An artist whose used his body as a canvas in his prior work, O’Brien allows us into his world from the first diagnosis ten years prior to his new home in a community of advocates in a top-notch nursing home.

As far as the storytelling goes, O’Brien and partner Pray have crafted a performative documentary expanding the canvas beyond what could have been a typical sob story: it’s visionary as it externalizes the rich internal life of O’Brien. Adjusting from an artist and cultural critic into an advocate for ALS, his work is inspirational and uncompromising. He’s unafraid to let it all hang out, even going so far as to appear naked in a wheelchair in front of the White House. Using his prior status as a savvy social media and Internet star, he’s able to illuminate the issues far beyond a basic stunt. TransFatty and company have crafted a documentary that, like his art, operates in several modes, from the shocking to the satirical, political and personal. As a deeply authentic work, it succeeds without compromise.

TransFatty Lives premiered at the 2015 Tribeca Film Festival and opens on December 25th.