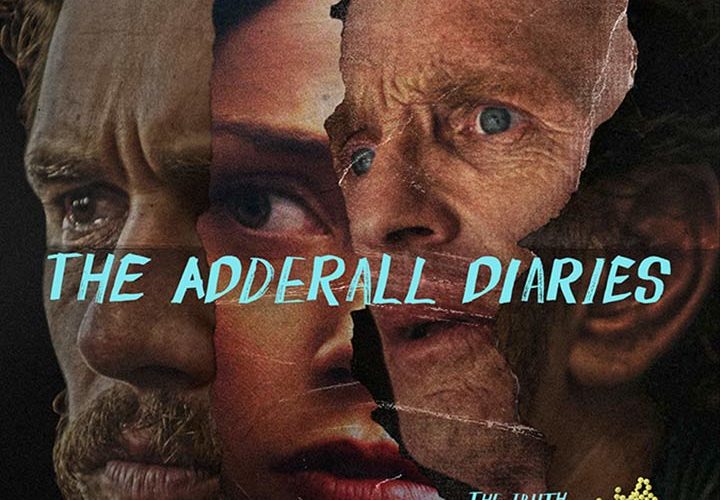 For a highly praised author, Stephen Elliott is a pretty dull guy. Having just found success publishing his memoir Apart, Stephen (James Franco) is on top of the world with a teaching gig at Columbia and two book deals. Of course he did it all hopped up on adderall, apparently not heeding the cautionary tale found in Prescription Thugs, another Tribeca picture this year.

Style trumps substance in writer-director Pamela Romanowsky’s The Adderall Diaries, a pet project involving Franco that perhaps seems to write the wrongs of his previous bomb about the writing process, Third Person. Inspired by a memoir from the real Stephen Elliott, his process here is a tortured one as he blames his father for his addictions in this cinematic equivalent of a Staind song.

It’s been awhile since Stephen has seen his father Neil (Ed Harris) a rageaholic with a good reason we later discover. Lying in his memoir, Stephen is called out at a swank book reading by Neil, throwing his career into disarray. He dabbles again in drugs as told through a series of slick montages – a crux much of the film relies heavily on as a narrative device used so obviously to patch shortcomings in its screenplay. Romanowsky and her editor Marc Vives must have been influenced by the storytelling of You Got Served.

Despite some complexities of Stephen’s character (including an interest in S & M) he’s thinly developed. The story isn’t interested in process so much as is in weak melodrama. Against the wishes of his editor Jen (Cynthia Nixon) he starts researching the court TV event of the mouth: the murder trial of Hans Riser (Christian Slater), a family man accused of killing his wife. The trial drones on as background noise, a thin MacGuffin with some minor correlations between Stephens’ pain of narrative and daddy issues. Boiling down to a chicken and egg scenario, Stephen reckons with the question: what came first, the drugs or the pain?

While at the trial he, of course, meets Lana (Amber Heard) a Times reporter who agrees to go out with him because he’s James Franco and also because he’s got a nice bike. The romance borders on self-destruction without a clear study in its evolution. The economic narrative is boiled down to a few laughs in a bar followed by a slick sex montage.

An ironic work of filmmaking, The Adderall Diaries explores the relationship between truth, narration and influence, yet resorts to cheap devices rather than observant truth. To a certain extent this is required given the context of Stephen’s past, but the extent to which it’s fitting in the present tense is obnoxiously messy. While Stephen starts to connect the dots in another dull montage that ends the picture, it’s far too late for us — as critical consumers of media we’re way ahead of Stephen. Perhaps a documentary about the real Stephen Elliot and his demons — real and imagined — would make for a more compelling experience.

The Adderall Diaries screened at the 2015 Tribeca Film Festival and opens on April 15th.