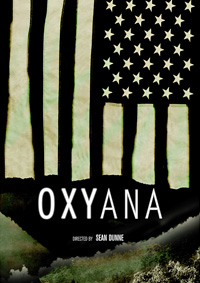 We never put a name to the face, as names are not required. It is brave of the residents of Oceana, West Virginia, the epicenter of OxyContin addiction to engage in a self-assessment. Looking the mirror is never easy and Sean Dunne’s powerful documentary provides us uncompromising access to the epidemic.

The film like many reporting on towns, usually industrial, that have been overtaken by addiction never makes a perfect link between cause and effect. I attended college in Hartford, CT near Willimantic, CT, a former mill town turned into the “heroin capitol of Connecticut,” yet all of the reporting including a multi-part series by the Hartford Courant had never successfully answered my question: what happens between someone losing their job and deciding to try heroin — how does that conversation with oneself go? Oxyana paints a fascinating portrait of Oceana, a town where there isn’t much to do apart from a few local strip malls and chain fast food restaurants. The film establishes the space and landscape, almost as if to say, “this is anywhere” — and perhaps this tragedy can happen anywhere. Told in first person interviews with many facing the effects of addiction, some are currently addicts and others, such as the town dentist, are coming to terms with the problems, while others are the family or lovers to addicts. It’s a cautionary tale and also an indictment of the medical industrial complex including “Pain Management Centers,” which produces and empowers addicts to continue to abuse.

If one is a dealer, he’s able to score unlimited prescription scripts for $10,00 in cash, selling pills for $10-20 a pop, with rare discontinued pills causing a bidding war amongst his customers. He’s also an addict and encouraged by his mother to get help. Families and neighbors are also victims; some become victims of robberies and violent crimes, as addicts do what they have to fund their addiction. Director Sean Dunne simply listens, without judgment to their stories. Some interviews are carefully composed, while others take a more off the cuff approach, including a young woman who is starting a family with a recovering addict. It is brave for these folks to in trust Dunne, who has made both a cautionary film and a political wake-up call by simply providing the evidence. Here is a town that needs help and a second chance at life, instead of medicating the problem.

Per capita, West Virginia has the most prescriptions per person, an alarming fact we learn from those trying to solve this problem. The film is a stark portrait of a town facing the tragedy of a lost generation: children are raised by grandparents, while a 25-year old claims half his graduating class has died of drug overdoses and drug-related issues. Eye-opening and sad, Oxyana is a straightforward, even conversational, document of a town in need of help and solutions.