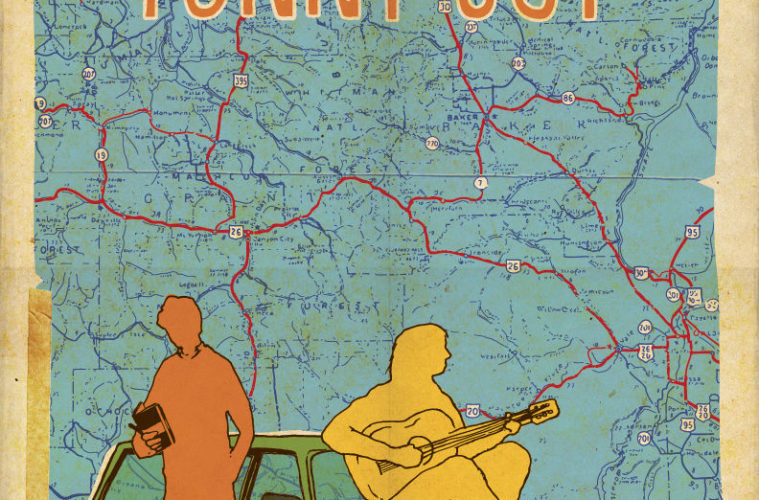 The bond of male friendship is examined – and tested – in Folk Hero & Funny Guy, a short and sweet dramedy from multi-hyphenate Jeff Grace, who writes and directs.

We meet comedian Paul (Alex Karpovsky) at the end of a tired stand-up routine in a beer-stained comedy club. Meanwhile, Paul’s childhood friend Jason (Wyatt Russell) has built a successful career for himself as a folk music star. Inspired over the course of a drunken reunion, Jason gets the idea to take Paul on tour with him.

And so ignites a leisurely paced, but entertaining road trip movie, largely shouldered by two reliable lead performances. Soon enough, the duo becomes a trio, with the addition of aspiring musician Bryn, played by the immensely likable Meredith Hagner. There’s a hint of a love triangle, before we’re made aware of the hidden complexities within Jason’s “rock star” life.

Confident in its lack of concrete answers but sharp in its observation, Grace traverses familiar ground with a sure hand. Paul’s recovering from a broken engagement with Emily (a blink-and-you’ll-miss-her Hannah Simone), while Jason’s pining for some kind of substance, which he’s manifested in an old flame, played by indie all-star Melanie Lynskey.

Russell is the stand-out, whose set for a long career following this year’s Everybody Wants Some!!. The young actor offers a natural charisma that meshes well with Karpovsky’s more neurotic tendencies. Though low on laugh-out-loud moments (the bigger moments tend to feel forced), there’s a comfortability to the comedy that feels authentic, allowing for the drama in the third act to hit a little bit harder than expected.

The perception of “success” emerges as a central theme, and one that is perhaps not dealt with quite enough in the narrative. One of the most intriguing elements of Paul and Jason’s relationship is that Jason is a perceived success, while Paul is thought of as a failure. It’s these “grass is greener” sensibilities that ultimately pull the duo apart, Bryn becoming the outlet of sanity. A young artist still discovering all that she can do, she comes to represent what both of our leads are searching for: drive and purpose.

It may read maudlin here, but Grace and his team thoroughly sell it. And despite a somewhat foregone conclusion, Folk Hero & Funny Guy rises above cliché thanks to a sure-handed, thought-out script, and memorable performances.