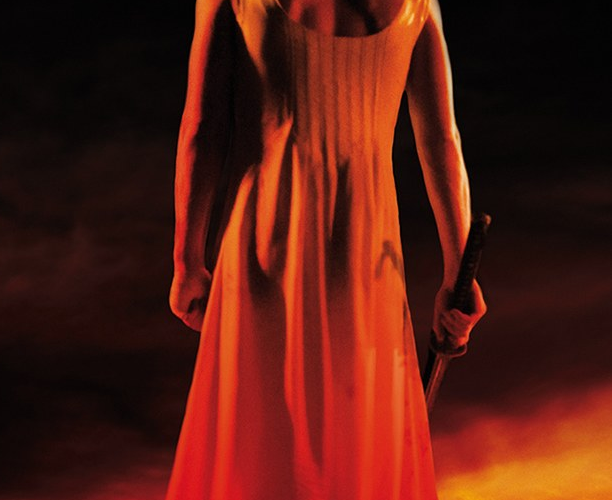 A strange man drags through the forest a meat-filled bag, its bloody contents all too visible through the clear plastic material. What seems like the introduction to a psychopath ends innocently when he, with a forlorn expression, hangs his messy bundle from a low-hanging tree branch. It’s soon revealed that the man, a police officer named Jakob (Michel Diercks), has ventured into the woods to make offerings to a lone wolf causing problems in the area. Why Jakob feeds the animal, especially since he’s been tasked with eliminating it, speaks to the deep-seated turmoil that defines Der Samurai, the latest feature from German writer/director Till Kleinert.

Set and shot in a rural East German community near the Polish border, the film follows the mild-mannered Jakob as he works the beat in his small, remote village. With each scene, we become aware of his quietly desperate existence. Despite his position of authority, he’s bullied by the local motorcycle club and ignored by his superiors. Though he longs for human interaction — proven by a fantasy in which he kisses a beautiful stranger — he instead stays home to play cards with his only living relative, his senile grandmother. His is a life bound by duty and repression — that is, until he meets a mysterious swordsman in a white gown (Pit Bukowski) who sets off on a path of death and destruction that only Jakob can stop. The shocking spectacle that transpires captivates with a mix of regional and universal themes, many of which, according to the filmmaker, recall the grim, psychological horror endemic to Germany’s literary tradition. With influences ranging from the Brothers Grimm to Jung, Kleinert produces a gloriously strange vision accented by dreamlike cinematography, near Evil Dead-level amounts of blood spray, and overtly symbolic wolves. As the film’s night-long chase winds through deep, dark woods and deserted streets, it becomes a haunting exploration of man’s duality, with the samurai inviting the orderly Jakob to participate in his increasingly violent acts. Yet it’s unclear just how their confrontation will end, which makes for a refreshingly unpredictable experience.

This bizarre nightmare benefits the most from the chemistry between Diercks and his co-star Bukowski, who previously worked with Kleinert on the award-winning short Cowboy. The two men physically complement each other, as Diercks endows his Jakob with a vulnerable, boyish softness, while his co-star exudes animal strength in both his taut musculature and feral demeanor. However, the movie really belongs to Bukowski, an impressive young actor who demonstrates a mad and infectious energy on par with the work of Klaus Kinski.

Kleinert defines this provocative work as a “queer thriller,” but the term underserves what communicates, with such stunning fashion, man’s desire to embrace (in this case, literally) his most primal, antisocial urges. True, a few moments speak to this categorization, primarily the brief, but exhilarating showdown between the androgynous samurai and the motorcyclists. Regardless of labels, Der Samurai is an unusual little gem of a film that excites with its own offbeat blend of horror, suspense, and visual elegance.

Der Samurai screened at Tribeca Film Festival and one can see the trailer above.