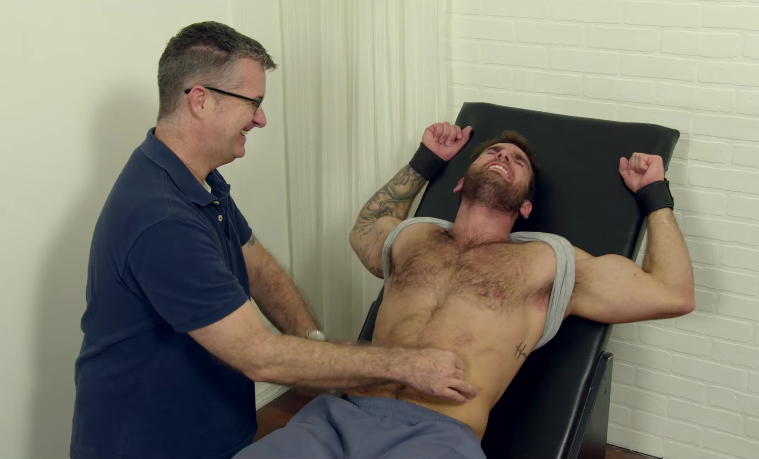 One may have to soon redefine what constitutes a sports movie. At Sundance earlier this year, New Zealand entertainment reporter David Farrier (and co-director Dylan Reeve) premiered Tickled, a film that dives into the “competitive endurance tickling.” However strange that may sound, they go on to unravel a web of conspiracy and intrigue in this underground world. Magnolia Pictures thankfully picked up the film and ahead of a release next month, the first trailer has landed.

We said in our review, “I’m generally in the bag for documentary material this weird, but Tickled too often gets in its own way. Though it makes sense that Farrier centers the narrative on himself as the main character, digging through the truth, this manifests mostly as him blandly narrating his way through the investigation. The film frequently elides the vital details of just what leads them from one clue to the next. This is most glaring in how the movie pivots from one thread to a supposedly disconnected one a third of the way through, only to reveal that they are in fact linked. This comes across as a staggeringly unlikely coincidence. Farrier will always state in voiceover exactly how the viewer should feel about what’s going on, even though there’s much better natural humor arising from the situations he engineers. A scene in which he “confronts” a trio of lawyers as they arrive at the airport with a friendly welcome sign is a miniature masterwork of both awkwardness and abrupt dread.”

One of the most talked-about films at this year’s Sundance Film Festival, TICKLED begins with reporter David Farrier stumbling upon a bizarre “competitive endurance tickling” video online, wherein young men are paid to be tied up and tickled, and reaching out to request a story from the company. But the reply he receives is shocking—the sender mocks Farrier’s sexual orientation and threatens extreme legal action should he dig any deeper. So, like any good journalist confronted by a bully, he does just the opposite: he travels to the hidden tickling facilities in Los Angeles and uncovers a vast empire, known for harassing and harming the lives of those who protest their involvement in these films. The more he investigates, the stranger it gets, discovering secret identities and criminal activity.

Discovering the truth becomes Farrier’s obsession, despite increasingly sinister threats and warnings. With humor and determination, Farrier and co-director Dylan Reeve summon up every resource available to get to the bottom of this tickling wormhole.