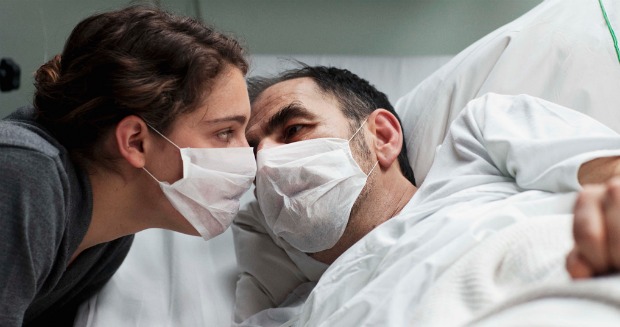 We were treated last week to that bizarrely suggestive Attenberg poster, which, knowing that the film stars Giorgos Lanthimos (the director of Dogtooth and Alps), wasn’t entirely unexpected. And we know have an equally eye-opening trailer, courtesy of Yahoo, that’s debuted just in time to build buzz for the film’s New York City theatrical release beginning on March 9. Attenberg was Greek’s Academy submission for this year, though it’s hardly surprising, from the few glimpses we’ve received, that it wasn’t exactly up the Academy’s alley. (Though perhaps we should cut them some slack, as they did, after all, nominate the aforementioned Dogtooth, which indeed stirred up its fair share of controversy.)

You’ll find the embedded trailer below, as well the official full-length synopsis taken from the film’s website. I’ve also included the latest poster because, well, it’s bound to elicit some kind of a reaction. Marina, 23, is growing up with her architect father in a prototype factory town by the sea. Finding the human species strange and repellent, she keeps her distance. Instead she chooses to observe it through the songs of Rev and Vega’s Suicide, the mammal documentaries of Sir David Attenborough, and the sex-education lessons she receives from her only friend, Bella.

A stranger comes to town and challenges her to a foosball duel, on her own table. Meanwhile, her father ritualistically prepares for his exit from the twentieth century, which he considers “overrated.” Caught between these two men and her collaborator Bella, Marina investigates the wondrous mystery of human fauna.

Will you be seeking out Attenberg in theaters?