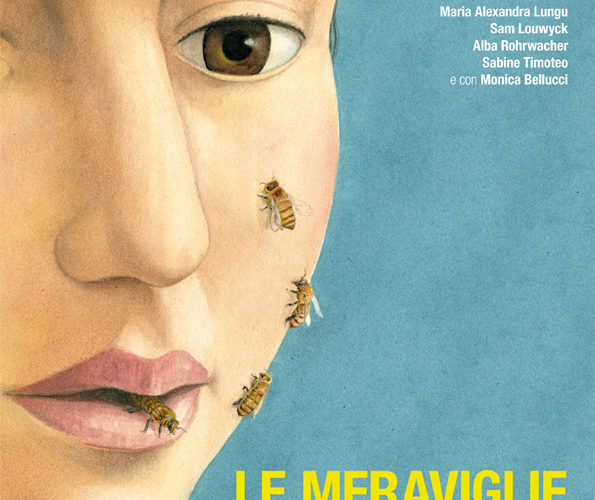 The last time Italy stopped by Cannes Film Festival they delivered what would become an Oscar winner with Paolo Sorrentino‘s The Great Beauty. They’ll be returning this year with the latest film from Corpo celeste director Alice Rohrwacher titled Le Meraviglie (The Wonders), which is among the competition for the Palme d’Or.

The first trailer has now landed today, which doesn’t have subtitles, but clues us in on the story of a fourteen-year-old Gelsomina who lives in the Umbrian countryside with her sweetly dysfunctional family. Her secluded microcosm is shattered by the arrival of Martin, a young German criminal on a rehab programme. Check it out below, along with the poster and expanded synopsis, for the film starring Monica Bellucci, Alba Rohrwacher, André Hennicke, Margarete Tiesel, Sabine Timoteo, and Sam Louwyck. Gelsomina’s family works according to some special rules. First of all, Gelsomina, at twelve years of age, is head of the family and her three younger sisters must obey her: sleep when she tells them to and work under her watchful eye. But the world, the outside, mustn’t know anything about their rules, and must be kept away from them. They must learn to disguise themselves.

Gelsomina’s father, Wolfgang, is a foreigner and Gelsomina is the future queen of this strange and improbable kingdom he has constructed for them. A male heir would have been better, of course, but Gelsomina is strong and determined and what’s more, she has a special talent for beekeeping and making honey. It’s Gelsomina that retrieves the swarms from the trees, who organizes the honey collection, and she is the one that carries the hives.

Whilst all around them the countryside is being burnt up by pesticides and rural life is falling apart and becoming something different, a TV competition arrives from the city offering heaps of money and a luxury cruise for the most “traditional” family. The show is presented by the good fairy, Milly Catena, and it’s called Village Wonders.

Gelsomina wants to participate, but Wolfgang won’t even consider it. Something else is tormenting him: the new European laws regarding farm produce. If they don’t get their honey lab in order, with washable walls and well-defined working spaces, they will have to cease production. They have to work very hard to expand the bee colonies, and get the lab up to standard. In his desperate search for cheap labor, Wolfgang agrees to take on a boy with problems, Martin, who comes from a youth rehabilitation program run by the German government. The tension mounts: between a silent evasive boy onto whom Wolfgang projects his desire for a son, and, counteracting this, the outward reaching force of Gelsomina that will stop at nothing just in order to see the good fairy again.

Le meraviglie tells a small but cruel love story between a father and daughter, their torments, jealousy and shyness. They give abundantly, and betray each other painfully. It tells of the ties that bind one family together, and a land undergoing a profound transformation.

It is also the story of a great failure, through which they all gather strength.

Cannes Film Festival kicks off on May 14th.