If 2008 did one thing right it was comedies. There was a hilarious mix all around, from Apatow to Smith to some new faces and even some crazy Canadians. Here are my ten favorite comedies of the year. Will Ferrell and John C. Reily prove to be the ideal comedic duo as they learn to love (and hate) each other as new siblings. While the film is nothing more than a long string of one-liners, it still brings more laughs than expected. There isn’t much story to find here, but if you still enjoy Ferrell’s man-child act, you will not be disappointed. Richard Jenkins is superb as Reily’s emotionally exhausted father, continuing his tremendous year after The Visitor and Burn After Reading. The film falters a bit leading up to the conclusion but I leave you with just four words: Fuckin’ Catalina Wine Mixer.

Steve Coogan stars as a diligent high school drama teacher that puts on an irreverent and disturbing play, the sequel to the beloved classic, Hamlet. It is his performance alone that carries the film. His charm and desire to make something worthwhile is fascinating and hilarious to watch. The film takes awhile to get going but it is all worth it for the extraordinary finale.

Although this film came out two years ago in Canada it just made its way to US theaters this past January. I was recently introduced to these crude boys from Canada, and after watching all seven seasons, three specials, and the film I have fallen in love. The film follows the Trailer Park Boys as they come up with the next big plan to get out of their life of crime forever. Nothing else makes me want to swear, smoke, drink, have sex, and get in trouble more than this show. The movie itself doesn’t live up to the greatness of the rest of the show, but for a new viewer, or a long time fan it delivers more than enough laughs. It’s too bad all we have left is one more movie (late 2009), and then the fine boys from Sunnyvale are done with the series.

2008: The Year of Danny McBride. The man starred in two more films coming up on my list and showcased his talent in this small independent flick. The Foot Fist Way features McBride as a hopeless karate instructor at a North Carolina strip mall martial arts school. His obsession with karate master Chuck “The Truck” Williams leads to a hysterical culmination. McBride’s crude and blunt delivery elevate the film to more than just your standard comedy. Look for more McBride on HBO this February when his new show East Bound and Down premieres.

Kevin Smith brings us the dirtiest and one of the most sentimental comedies of the year. Seth Rogen and Elizabeth Banks star as childhood friends turned roommates who, strapped for cash, decide to make a porno. Their surprising chemistry, along with the likes of Craig Robinson, Brandon Routh, and Justin Long as great supporting characters make the film truly remarkable. It’s a shame the film didn’t make more money. If one listens to Kevin Smith’s newest SModcast episode they would learn he spent much of the last month in a “pot-induced” haze because of the box office failure of the film. It’s a sad tale but this movie brings more than enough laughs for us to remember.

Ben Stiller’s big-budget movie about a big-budget movie proved to be one of the most entertaining comedies of the summer. Although some of the jokes fell a little flat there was more than enough greatness to make this one hell of a ride. Most of this is due to the spectacular set of characters from Golden Globe nominated Kirk Lazarus and Les Grosman to passionate director Damien Cockburn to action star Tugg Speedman and his agent Rick Peck; each giving us unique ways to laugh. It’s been awhile since I’ve seen a comedy with such high production values and such memorable characters. This movie made my p-p-p-p-pee-pee tingle in more than one way. Any movie that can make a live action role playing battle more intense and gripping than a Lord of the Rings skirmish gets major points in my book. That’s not the only thing this comedy does right. Smart writing and outstanding performances truly elevate the film. Rudd and Scott are fantastic, but the real winner is Jane Lynch. She is the supervisor of Sturdy Wings; the Big Brother program Rudd and Scott must take part in for community service. Her matter-of-fact delivery and painfully funny dialogue make her one of the finest parts of the film. I’m equally happy for David Wain. As director, co-writer, and actor in the film he truly deserves a hit, after last year’s underappreciated The Ten didn’t do so well. 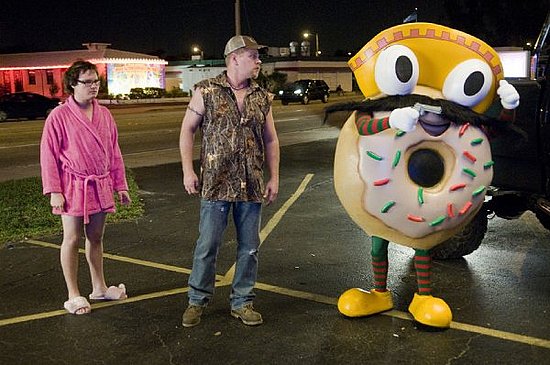 Did anyone see this movie? Unfortunately, it’s only made $8.4 mil during 7 weeks of release. For one of the funniest movies of the year this is some sad news. The film follows 18-year-old Ian Lafferty on a cross country road trip with his friends and the desire to lose his virginity. Yeah sure, the idea sounds like a mix of Road Trip and American Pie, but the jokes are smarter and dirtier than both films put together. James Marsden and Seth Green both surprise as being pretty damn near perfect for their respective roles; as a homophobic older brother and a technically proficient Amish man. As Ian goes on his quest to lose his virginity everything that happens and everyone he meets culminate into a flawlessly written and hilariously executed finale. For the many that missed it in the theater, be sure to check it out when it hits DVD and Blu-ray on Feb 3rd. Directed by indie auteur David Gordon Green, this action-comedy is so much more than just your generic stoner flick. I haven’t seen a film in a long time where the action compliments the comedy so perfectly. As the plot and the jokes get more ridiculous, so does the action. James Franco is the definition of excellence as a lovable stoner and weed dealer. The best scene of the film involves Danny McBride, Seth Rogen, and Franco in all out brawl. Imagine a fight where the contenders have no idea how to fight. David Gordon Green is able to perfectly capture the chaos and sloppiness of such an event. The whole film echoes this messy style, and it is so damn fun to watch. This film is a prime example of how beneficial a good director can be when it comes to comedies. With such a solid string of films, I look forward to what David Gordon Green does next, whether it is a blockbuster summer comedy or a low budget independent film. This romantic comedy does everything right. Jason Segel hits it out of the park with his first produced screenplay and first lead role. Every line is so well crafted and each performance so enjoyable that it’s near impossible not to fall in love with the film. Who wouldn’t want to take surfing lessons with Paul Rudd, explore the island (and more) with Jack McBrayer, or sit by a campfire with Mila Kunis? Segel may be the lead here but Russell Brand steals the show as rocker Aldous Snow. He is rude, obnoxious and completely lovable. This film does more than just tell an entertaining story. The endearing dialogue and genuine relationships transport us right into the film; something most comedies strive for, but rarely do.

What were your favorite comedies of the year?