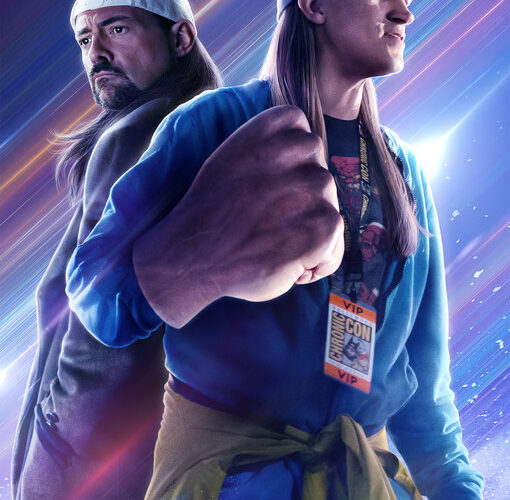 A lot happens in eighteen years. Look at Kevin Smith. While his daughter was born two years prior to Jay and Silent Bob Strike Back, fatherhood had only begun. Then he moved away from the View Askewniverse (with varying success), started a podcasting career (spawning his weirdest movie to-date, Tusk), and suffered a heart attack that sparked weight loss and the overdue mending of burnt bridges. So while Jay (Jason Mewes) and Silent Bob’s (Smith) first journey to Hollywood wielded them as immature idiots with so little character development that an entire shoehorned subplot about cat burglars was added for hollow drama alongside the lowbrow antics, a more mature Smith couldn’t just go back to that well. These characters now needed to add substance to their own story. I was skeptical when Jay and Silent Bob Reboot was announced because a majority of diehard fans probably did want more of the same: misogyny and gay jokes. Because he’d have been successful putting two forty-something stoners on-screen spewing that same hate masked as cartoonish farce (Smith’s recent low budgets and roadshow tours almost guarantee profit), it does matter that he didn’t. Some remains (especially the latter considering the premise hinges on Jay and Bob being “hetero life-mates”), but it’s joined by self-reflection and timely progression (prepare for a satisfying Chasing Amy send-off). Forcing Jay to put love over sex with Shannon Elizabeth’s Justice simply gave her criminal pals a path to hijack Strike Back. This time Jay receives a true emotional arc so nobody steals his thunder.

There’s definitely nonsense to conquer before really delving into that possibility, however, since Smith must remind everyone who these guys are after the better part of two decades have passed. That means a Buffalo Bill tuck, a Brodie Bruce (Jason Lee) dance, and the Quick Stop. Rather than set the plot up with these familiar shenanigans alone, though, Smith decides to add an overlong courtroom scene that does more to frustrate in its over-the-top embellishment (Justin Long is doing a bad Harvey Fierstein voice and Joe Manganiello appears to have been given one director’s note: hammy) than importance via a convoluted con game stealing Jay and Bob’s names. It has marginal purpose later with Jay using Ted Underhill as a nom de plume, but it’s painful to watch.

Only after the duo gets their sexcapade fantasies out of the way at a Mooby’s can the juvenile humor start fading into the background and familial drama take control. This stems from a reunion with Justice and the bombshell revelation that Jay fathered her now eighteen-year old daughter Milly (Harley Quinn Smith). She makes him promise not to tell her before leaving and he does his best to comply. Once they decide to travel to Chronic Con together—Jay and Bob to ruin the last scene of Bluntman and Chronic reboot Bluntman v Chronic while Milly and friends (Treshelle Edmond’s Soapy, Aparna Brielle’s Jihad, and Alice Wen’s Shan Yu) hope to make Shan Yu an extra in it before returning to China—that promise becomes harder to keep.

This struggle is Jay and Silent Bob Reboot‘s core and it never disappears since the camera rarely if ever leaves Jay and Bob’s side for the duration. Crazy situations still ensue (thanks to Fred Armisen’s square of an Uber-like driver, a Ku Klux Klan meeting, and the perils of edibles), but everything leads back to Milly’s safety, rebelliousness, and sorrow. How will Jay react to her being more like him than her straight-A education in a big house with a celebrity mom (Justice does TV weather in Chicago now) would suggest? And how will he confront the fact that he’ll have to reconcile all the mistakes he’s made to both understand what she’s going through and figure out an avenue to help in ways no one helped him.

For all its redundancies—the film enjoys telling us its definitions of sequel, remake, and reboot while also highlighting the myriad ways it knowingly embodies each—this authentic character growth is wholly new. Everything Smith did wrong to allude to a similar arc in Strike Back before ultimately doubling down on Jay’s inability to change has been corrected in order to cut through the history of his empty humor and deliver dual-layered catharsis. This father/daughter dynamic isn’t solely about her filling the hole his absence left in her heart. Jay grew up without a father too and no amount of drugs or ambivalence can keep that fact hidden once her arrival unleashes its flood of emotions. It’s time that he moves forward and puts selfish motivations behind him.

You can also throw Kevin Smith into this mix because he literally puts himself on-screen as the director of the reboot within the Reboot. The usual jokes at his career’s expense are included with mentions of the heart attack that got this ball rolling. But while most of these laughs are winking, some do acknowledge his missteps and the legitimate criticism people have about his work. It’s therefore no coincidence Ben Affleck shows up (with some winks of his own)—a feat that couldn’t have occurred without Smith realizing his own part in the demise of certain friendships along the way. So don’t be surprised to see some introspection moving beyond the page itself and into the lives of those who agreed to go on one more ride.

Jay and Silent Bob Reboot is now in the midst of its nationwide roadshow.