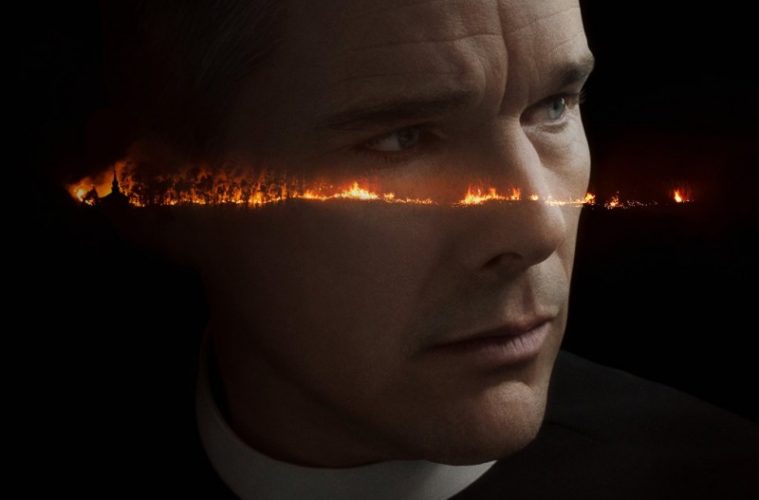 Paul Schrader has been open about the original intentions for his most famous work, the screenplay to Martin Scorsese’s Taxi Driver. Writing it in the vein of Robert Bresson films like Diary of a Country Priest or Pickpocket, it was his full intention for the film to be directed in a similarly austere fashion. This writer perhaps doesn’t need to further recount what actually happened in the end result of one of the most famous American films of all-time, but nonetheless the multiple authors involved put it in a different direction.

It seems that some of Schrader’s own directorial efforts, be it American Gigolo or Light Sleeper, were certainly an attempt to complete the “Transcendental” experience to one degree or another. Yet four decades later, First Reformed — which, should be mentioned, also seems to be taking from Bergman’s Winter Light and Tarkovsky’s Sacrifice in the religious cinema canon — may be the full realization of Schrader’s vision.

Made with a kind of formal rigor that one would’ve assumed was long past Schrader after the “post-cinema” experimentations of The Canyons and Dog Eat Dog, First Reformed is first and foremost most admirable for its sustained mood. Shot in The Academy aspect ratio and maintaining a stillness and greyness that manages to seem utterly alien to the slow cinema standards of contemporary art films, one gets the sense of the director really having a genuine stake in the making of this picture. It seems the religious content is not so much an affect as a genuine late-in-life plea.

Schrader’s lonely man in this case being Toller (Ethan Hawke), a chaplain at an upstate New York church going about an aimless existence, writing in, yes, a diary of his pained life, which seems to be slowly transitioning into life-threatening sickness. Yet a reason to possibly go forward emerges when seeking his help are a young couple, Mary (Amanda Seyfried) and Michael (Philip Ettinger). While Mary is pregnant with his child, Michael can’t conceive of bringing a person into this world, being a radical environmentalist and having realized that we’re long past the point of saving the planet from the impending doom of climate change. Not making much time for a dialectic between Michael’s utter lack of hope and Toller’s religious reassurance, Michael soon commits suicide. From there, Toller seems to inherit Michael’s level of despair about the state of the planet, with Mary and her unborn child’s well-being as the future he needs to find out if he can fight for, to which takes him to a questionable interior monologue.

What exactly a country priest’s diary, written in a plain notebook with pen, means in the modern world is a question posed throughout. Though that speaks to the thing that’s most curious in parsing First Reformed, that being what is the level of identification that we’re likely to find with the usual deranged Schrader figure in this particular case. Hawke’s terse performance, the rare turn by a movie star that can almost completely shun conventional likability goes about in tipping us toward seeing Toller as unhinged. Yet you also can’t help but feel like the film is arguing the world as an increasingly poor place; the underpopulated small-town spaces as stand-in for the deadening that’s befalling humankind, even more than just Toller’s point of view.

Regardless of the Minister Travis Bickle at its centre, the perspective that comes to define First Reformed is still not necessarily one of burn-it-all-down rage. In fact, it seems a film designed for the purpose of building to the image of a redemptive, transcendental embrace of two bodies. Perhaps it’s the best of both worlds, meticulously constructed yet genuinely thinking and posing questions along the way.

First Reformed screened at the Toronto International Film Festival and opens on June 22.