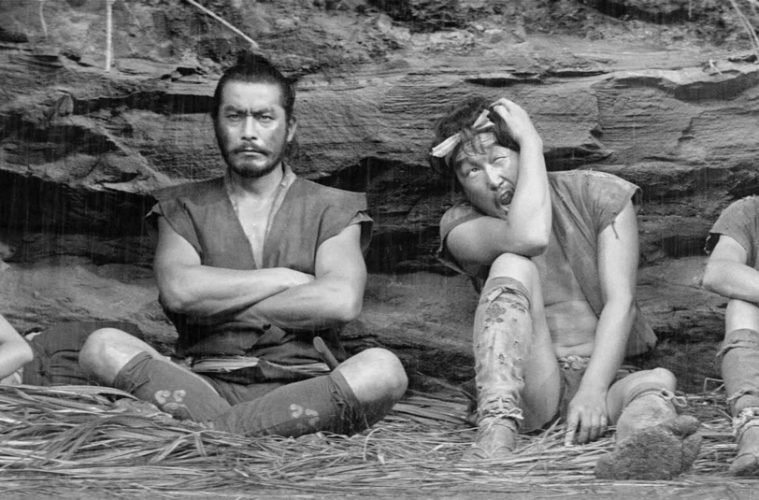 If the contemporary experience of watching Akira Kurosawa has been colored by commentary describing his work as “channeling meaning towards a single destination” or carrying “sentimentality and preachiness,” the opening image of The Hidden Fortress should then stir viewers from defunct adages. Here are two peasants walking through a desolate landscape, a handheld camera slowly tracking their mordant movements. They slowly recall their woes of going to fight in a war only to be mistaken as the other side until, out of nowhere, a small group of soldiers ride valiantly into the frame, heretofore undetected by our heroes.

This sort of formal complexity is what’s most often lost for detractors of Kurosawa — often pointing to his humanist tendencies as overwhelming the narrative image — as The Hidden Fortress comes with few of those markers, instead proving closer to a pure action-adventure movie. (Dave Kehr smartly postulated that it was “the only Kurosawa film unburdened by a need to make art.”) The Hidden Fortress also works as a Rosetta stone for how the great Japanese director would use formalist techniques as a means of foregrounding multiple interpretations of his texts. The film uses what I would call a “politics of space” to keep its characters moving toward a single destination, thus lending its thematic gestures further variety and complexity.

Despite its reputation within the expanse of Kurosawa’s filmography, few talk about the work outside some passing mention of its (rather minor) influence on a film of some notoriety called Star Wars. Those watching for no reason but this will lose sight of such a connection quite early, as two peasants find themselves thrown around by the army which denied them as they’re forced to search for gold in a now-abandoned fortress of the defeated Akizuki clan. Despite crafting many of his masterpieces in the classical Academy ratio, the widescreen “Tohoscope” (CinemaScope for Japan) image naturally befits Kurosawa’s dynamically lit compositions and swift camera movements, along with epic moments such as a staircase battle between prisoners of war and their captives — a staging which must feature hundreds of extras. But Tohoscope is more than just an excuse to go big with the images; it also forms the central dynamic of The Hidden Fortress: the difference between those who view their surroundings and those blind to them. For as much as peasants Tahei and Matashichi are caught within this landscape, they’re often shown to be unaware of the expanses of the frame. As Catherine Russell puts in her essay, included with the release, “Although the comic point of view of the two peasants is privileged for most of the film, the use of deep focus and expansive long shots situates the two men within a larger worldview.” Simply consider the image in which the Akizuki clan’s general, Rokurota (Toshiro Mifune in a playful mood, similar to Yojimbo), first appears before the two men, who don’t even notice his appearance in the back of the frame until a minute into the shot, suddenly surprised at his placement. This matter repeats itself throughout as Tahei and Matashichi remain woefully unaware of both their surroundings and the context of the situation they’ve fallen into: acting as dummies to help secretly transport the princess of the Akizuki clan and her precious gold across dangerous enemy territory.

Some may identify some uncomfortable class critique between the great leaders and the fools exploited because of their own foolishness, but at every moment does Kurosawa complicates this, showing that an easy takeaway is not apparent. Tahei and Matashichi are not just fools wandering the Earth, but peasants at the brink of existence left desperate for any sense that a better life is possible. Within the barren landscape of their journey, desperation exhibited when climbing a rocky hill — in one of the film’s most excruciating scenes — takes on a bitter empathy, to then suddenly be undercut by the joke Rokurota has played on them. But we don’t lose any sense of the feelings exposed when, similarly, Princess Yuki (Misa Uehara in her first role) is lowered from her honorable position to that of a common peasant, propositioned for payment and unable to fight back as she hides her true identity by assuming that of a mute. That the fellow Akizuki peasant they take on the journey would prove honorable — despite having no reason to even display an ounce of dignity — further complicates the class relationships of a journey where those from low and high must meet in the middle.

For a film, then, that seemingly avoids thematic weight in favor of spectacle, The Hidden Fortress might be in the company of High and Low as one of Kurosawa’s richest works. The spectacle is quite astonishing, too, playing out along the epic Tohoscope screen: he ratchets the tension again and again through carefully meticulous battle sequences that prove more intimate than the climatic third of Seven Samurai, these giving each gesture careful articulation. The horse chase between Rokurota and three enemies is the closest Kurosawa came to matching the shot structures of John Ford, close-ups of the galloping legs carrying a visceral feel. And then there’s the spear duel between enemies — a thrilling use of dynamic environment as men tear through a fortress’s training grounds. But the final escape on top of a huge wooded mountain is truly Kurosawa at his best: he uses sounds surrounding the frame to articulate what is almost never seen until the climatic shot, itself a startling moment that only fully performs in conjunction with the absence of hidden army.

The charges of “humanism” against Kurosawa do not come without some merit, but it’s hard to imagine the critics of Cahiers du cinéma who instead praised Mizoguchi failing to note directorial parallels late in the film, when Yuki sings a song of hope in a solemn, quiet long take that recalls the song of the mother in Mizoguchi’s own Sansho the Bailiff. If The Hidden Fortress at first seems like the closest to an aberration in his canon, it is perhaps a better place to understand the director than most other strictly canonical examples; observing and describing the work onscreen reveals a complex artist whose images were hardly singular in their goals and extremely fluid in meaning.

The Hidden Fortress is now available through The Criterion Collection.