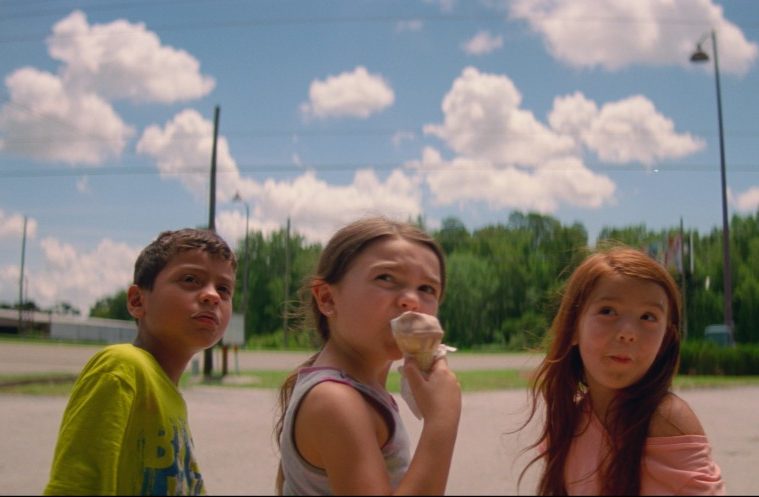 Sean Baker’s vivid new film The Florida Project is now playing in New York and Los Angeles and it recently played at the New York Film Festival, fulfilling the director’s long-time dream. While at the festival, he sat down with his producer Chris Bergoch and acting coach Samantha Quan at the Elinor Bunin Munroe Film Center Amphitheater.

The trio took part in NYFF Live, a nightly event held during the festival to go deep into the process of making the films highlighted across every category of the fest. Baker and Bergoch talked about stumbling upon the ‘hidden homeless’ in south Florida that inspired The Florida Project. They also discussed casting breakout star Brooklyn Prince and The Little Rascals influence throughout Baker’s films. Throughout the talk, one gets a taste for Baker’s humanism and how it drives every storytelling decision across his oeuvre. He is gifting American cinema with a focus on society’s broken and left out like a modern-day Satyajit Ray.

See highlights and the full talk below.

Chris Bergoch: “We were working on an MTV show in 2010 that got cancelled and wasn’t a good match for MTV. But that was the blessing in disguise because that led to Starlet. We came up with the idea for The Florida Project around that time and it was something we’ve been trying to get going ever since.”

Sean Baker: “Chris brought this world to my attention. I didn’t know anything about it. I didn’t even know there was an issue about the ‘hidden homeless’ in our country. Chris brought me news articles focusing on the situation in Kissimmee and Orlando.”

Bergoch: “I didn’t know myself until my mom moved to Orlando. So when I would go down to make visits to see her, the drive across U.S. 192 that you see in the film, I would see kids playing in motel parking lots. It kind of intrigued me because they didn’t look like tourists and I was wondering what was going on there because they seemed to be doing everything that I did as a kid, playing wiffle ball, playing hide and seek, but it was in the motel parking lot. It led me to do some researching and finding out they live there. Then bringing it to Sean, saying I think there’s a very good story here for a Sean Baker film.”

Baker: “I started reading more articles about it and it was that juxtaposition of those children growing up in budget motels, technically homeless because their families could not secure permanent housing, right outside the happiest place on earth for children. That drew me in.”

Baker: “I’ve always wanted to make a film about children. I’ve been very inspired and influenced by The Little Rascals my entire career. You’ll see winks in every film I’ve made at Our Gang. I think what Hal Roach achieved almost seventy years ago with child performances hasn’t really been matched many times since. If you think about The Little Rascals actually was; these comic shorts set against the great depression. Most of the characters in The Little Rascals were living in poverty. The focus was the joyous nature of children, what makes the universality of childhood and focusing on the comedic adventures of children. I thought that was special, I thought that was ahead of it’s time. I saw these shorts growing up, they would play on New York television after school. At the time they were entertainment. When I revisited them later in life I realized, wow, it’s actually an interesting approach to this. So I always wanted to do something like this. When Chris brought this topic to my attention, I thought this might be our opportunity to make a present day Little Rascals.”

Researching for The Florida Project

Baker: “We spoke to the whole community. We were speaking to residents at these hotels, we were speaking to the owners, managers. People who worked at the agencies, the nonprofits who provided social services to the homeless in that area and eventually to some of the local government. If you had to nail down one person (who was our entry way into the community), it was the motel manager, who really in many ways inspired the role of Bobby, who Willem Dafoe plays in the film. He was a wonderful gentleman who’s been very supportive. I’m not going to give his name because I’m not sure he wants us to. He’s the guy who said, yeah this story should be told. What these families are struggling with, nobody knows about this, and I think it’s an important story to get out there.”

Bergoch: “We were walking onto the places looking for collaborators or people who just want to talk to us. It was good to have a friendly face like our producer Shih-Ching Tsou there as well because when he saw two guys walking up he was on guard. We met him with a baseball bat in his hands. We were lurking around the property and there were children playing.”

Baker: “It didn’t look good. Think about it. It was two guys our age with my tiny little chihuahua walking onto a playground, which very much inspired the scene with the pedophile. We turn around, there’s this gentleman and he’s like, “What are you guys doing?” I was like, “Oh, yeah, we’re doing research for a movie, thanks!” Chris goes, “No, you better talk to him now, this doesn’t look good.” He brought us into the office. He started interrogating us… this is a nice story for the New York film community, I think. He said Andrew Garfield stayed here for a week. I was like, oh no, did Ramin already make this movie? This is 99 Homes, isn’t it?! Because Ramin Bahrani and I are friends and we make very similar movies, and I had not seen 99 Homes yet. It was still in post-production. He had done his research around Route 192 as well, and this gentleman was helpful to him as well. As soon as I dropped the name Ramin, he was like, “You guys are legit, it’s okay.” We were actually in their office texting Ramin. It was then the ice was broke and he was inviting us to his home, telling stories.”

Baker: “We had a local casting company, two agencies, actually. I wanted to cast locally with the kids. It was very important for me because I didn’t want to fly in Hollywood kids, I needed the accents to be right. We looked at a lot of kids over several major casting sessions, sometimes in motels and sometimes in a local community center. We said your kids don’t have to have any prior experience, we’re just looking for great personas, bring them on in. Brooklynn Prince, who happened to be in the database for a local casting company called CrowdShot. We hadn’t seen her at first. We were getting a little worried because it was getting very close to production, about two months out. And I said we weren’t going to make this film unless we find the present day Spanky McFarland. I was adamant about that. The same thing with Tangerine, I said we were not going to make this film unless we secure Donut Time. That was the caveat for that film. The caveat for this one was we have to find Spanky. Then one day she came in. It happened to be she auditioned at the same time as Christopher because we were putting kids together to see what their chemistry would be like. They blew us away in seconds. Christopher said, “I have to get myself energized and psyched for this audition.” He got on the ground and he started doing push-ups and then little Brooklynn started doing squats. So I was watching these two kids do a boot camp and I was just, this is amazing! They haven’t even started auditioning and they’re already winning us over.”

The Florida Project is now in limited release. See the full NYFF Live talk above.