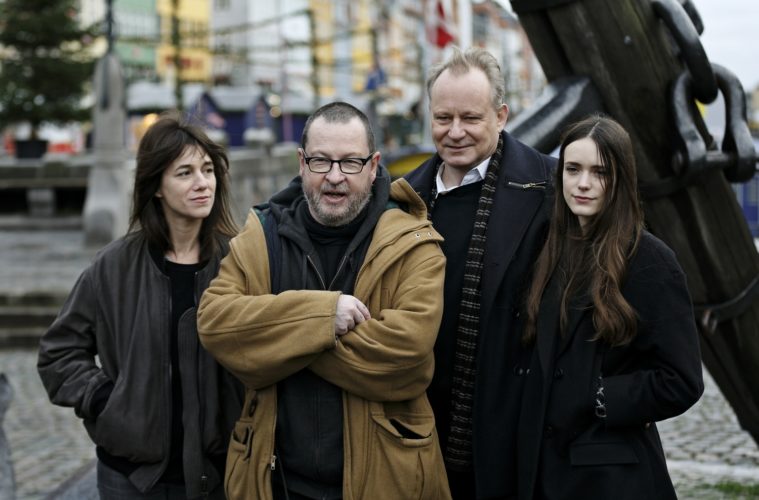 The Filmmaking of ‘The Grand Budapest Hotel,’ the Themes of ‘Nymphomaniac,’ and More Sundance London announced their 2014 line-up, including Frank, The Voices, Blue Ruin, Obvious Child, and more. See our reviews of the majority of the films here.

At The Dissolve, David Ehrlich explores how the themes of Nymphomaniac can be found in Lars von Trier‘s previous works:

“Fill all my holes.” Early in Lars von Trier’s Nymphomaniac, Young Joe (Stacy Martin) coos these words to one of the countless men she has sex with during the two part, 241-minute opus of depravity. While what she’s saying carries a clear erotic charge, her bluntly literal instructions aren’t a come-on so much as a desperate plea for fulfillment. As Joe relates her life story to the overeager stranger Seligman (Stellan Skarsgård), who found her lying in an alley near his home, what was first intended as a simple request for comprehensive penetration evolves into a tragic refrain, with the unsubtle subtext that might be expected from a filmmaker who has the word “fuck” tattooed across his right-hand knuckles. Joe is suffering from an incurable sense of incompletion. Loneliness, she tells Seligman, has been her constant companion. That simple admission confirms Nymphomaniac’s role for von Trier—this is the film that binds his work together. These are his confessions.

Andrea Arnold will preside over the jury at this year’s Cannes Critics’ Week.

Daniel Walber runs through five woman documentary pioneers you should know at NonFics.

Watch the trailer for Emerging Pictures’ Cinema Made In Italy series, which will bring five recent Italian films to the United States, following Paolo Sorrentino‘s The Great Beauty. They are Gianni Amelio‘s L’intrepido, Marco Bellocchio‘s Dormant Beauty, Bernardo Bertolucci‘s Me and You, and Valeria Golino‘s Honey, all hitting theaters this year.

At The Telegraph, Anne Bilson looks at why preposterous thrillers form a genre all of their own.

Paul Dano delivers his top 11 films on The Criterion Collection:

I am a huge fan of the Criterion Collection. I read the booklets while I ride the subway. I obsess over the pictogram of films they will release (is A Brighter Summer Day coming?!). Making a Top 10 list is near impossible. So in honor of the Criterion edition This Is Spinal Tap, I turned it up to 11.

Watch Catherine Grant‘s video essay on the notion (and some of the motifs) of intersection in Wong Kar-wai’s In the Mood for Love.