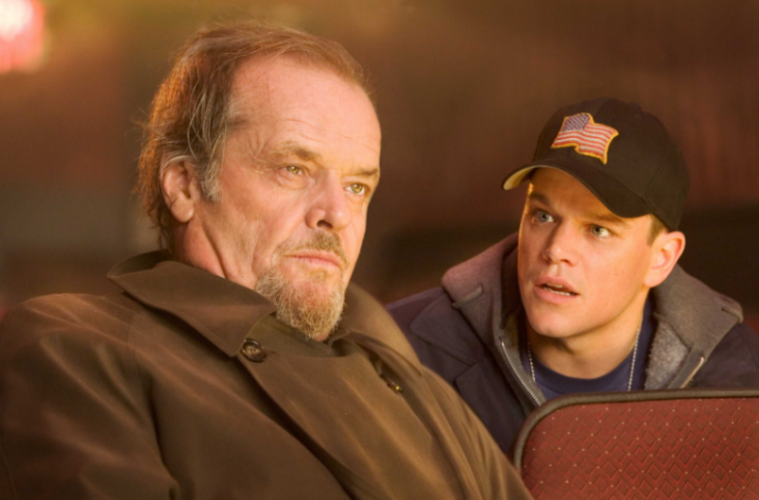 When The Departed won both Best Picture and Best Director at the 79th Academy Awards, the degree to which the film itself deserved this accolade was largely drowned out by the film community’s collective, exasperated utterance of “Finally!” in reaction to the long-overdue recognition of Martin Scorsese. Indeed, it was incredible — even criminal — that this titan of cinema was just now being awarded for his genius. One of New Hollywood’s reigning figures, Scorsese had been working powerfully and prolifically for nearly 40 years prior to The Departed, building one of the finest filmographies in the history of cinema. When the 2006 film brought the long sought-after gold statuettes, there persisted a received wisdom that the awards were being granted more for a lifetime of exceptional achievement than for this achievement in particular.

On this day, which marks the tenth anniversary of The Departed‘s theatrical release, let us look at why this film deserved every accolade it got — which, in addition to Best Picture and Best Director, included Best Adapted Screenplay and Best Film Editing. For his role as the dirty-mouthed Sergeant Dignam, Mark Wahlberg received a Supporting Actor nod. In a perfect world, nominations would have also gone to Leonardo DiCaprio, Jack Nicholson, and Matt Damon, whereas Howard Shore would have at the very least received Best Original Score attention for his haunting guitar-based work, which offers an elegant contrast to the film’s boisterous sampling of the Dropkick Murphy’s “Shipping off to Boston.”

Put another way, The Departed is, cinematically speaking, the whole package. Its plot, which borrows the basic premise of Hong Kong hit Infernal Affairs but cranks the complexity up to 11, pits cop against criminal in a battle where each has an undercover in the other’s midst. This premise engenders scenes of searing tension, as when the two moles, both of whom are trying to sabotage the other’s operations from behind enemy lines, first discover each other’s existence during an illegal arms deal. In chronicling the parallel but eventually converging stories of the two rats, Scorsese regular Thelma Schoonmaker establishes an economical but propulsive editing scheme built largely on cross-cutting and the suspense this technique generates. Topping off the film’s blazing energy is the whirligig cinematography by DP Michael Ballhaus, which features roving shots, irises, at least one shot that is rotated ninety degrees, freeze frames, a blissful two seconds evoking Wong Kar-wai’s iconic step-printing, and an abundance extreme close-ups that function as cinematic exclamation points. To watch The Departed is to see the full arsenal of cinema on display, with all parts working together in euphoric synergy.

Though Scorsese and his team have always been masters of their craft, it is the director’s humanism that has arguably been the greatest source of his filmography’s power. Scorsese is interested in people — how they think, feel, and interact in various cultures, communities, and contexts. “I don’t want to be a product of my environment. I want my environment to be a product of me” is the first line in The Departed, and it describes not only the film that it opens, but Scorsese’s career-long exploration of the interaction between men and milieu. This interest has manifested in his anthropological fascination with mob life in Mean Streets, Goodfellas, and Casino; his affinity for nocturnal fringe figures as seen in Taxi Driver and Bringing Out the Dead; his empathy for the destructive / self-destructive Jake LaMotta of Raging Bull, and numerous other examples. In all the aforementioned cases, cities are treated as their own characters, demonstrating Scorsese’s proclivity for orienting drama within a larger patchwork of local histories and narratives.

In the Boston-set Departed, it is the dialectic between identity and social performance that takes center stage, and it does so in the most dramatic way possible: Billy Costigan and Colin Sullivan, as the police mole in the mob and the mob mole in the police department, respectively, lead lives of deception, 24/7, for years. Though their allegiances and sense of self-identity seem clear at first — Billy is a cop playing mobster, Colin a mobster playing cop — the buffer of performance separating individual identity from environment begins to feel suspiciously thin as the film progresses. As part of Billy’s initiation into the mob, he needs to commit criminal acts to dispel suspicions that he’s an undercover cop, but some moments of violent acting-out (pun-intended) feel organic and expressive rather than calculated. On Colin’s end, the role of police officer is meant to be a cover, but, more often than not, his enjoyment of his job perks seems genuine. To Scorsese’s credit, the film refuses to fully answer the question of when characters are performing and when they are not. After all, performativity operates on a spectrum, not through an on-off switch.

For Billy, the situation is even more complicated given the constant threat to his life in the form of Frank Costello, Jack Nicholson’s scenery-chewing, fearsomely volatile cartoon of a gangster. Faced with such a harbinger of destruction at all times, Billy probably experiences, as Roger Ebert surmised in his review of the film, a version of Stockholm Syndrome, in which the character comes to misconstrue withheld violence as an act of mercy or even love of some sort. The resulting vulnerability, as well as the hyper-masculine posturing used to mask it, come through in DiCaprio’s performance, one his greatest.

With its plot-level focus on performance and on the over-performing that results (early in The Departed, Billy’s macho posturing is humorously dismissed by the tough-guy gangsters with whom he is trying to ingratiate himself), the film as a whole turns into a self-conscious showcase of its actors’ abilities. The film’s very premise reads like an open challenge to actors to test their chops, given that it involves the playing of performers who might not actually be entirely performing. The actors rise to the occasion, giving wildly theatrical turns that draw attention to themselves, and so The Departed becomes about its own virtuosity in the way a high-wire circus performer might put himself on the line for both the beauty of the act and the roar of the crowd. In response to a film this fiercely entertaining and impeccably executed, the roar should be nothing less than deafening.