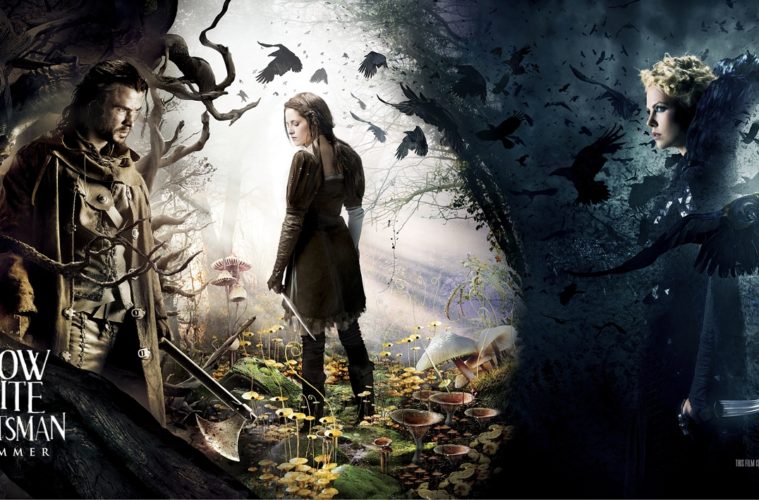 ‘The Darkest Hour’ Theatrical Poster & First Look at the World of ‘Snow White and The Hunstman’; Trailer This Week

At San Diego Comic-Con this summer we got our first look at Universal’s Snow White and the Huntsman, before production even began. The costume tests showed off our Snow White (Kristen Stewart), hunstman (Chris Hemsworth) and the evil queen (Charlize Theron). With shooting in full swing for the film directed by newcomer Rupert Sanders, Universal is finally unveiling the first real look.

We have a banner above (click it for hi-res) and the first trailer arriving on Thursday. The world looks more detailed than Tarsem‘s rival Snow White project Mirror Mirror (those pics here), and I’m definitely getting the Lord of the Rings meets Alice in Wonderland vibe they are trying to convey. I’ve enjoyed Sanders commercials, most notably his iconic Halo ones, so I’m looking forward to what he does here when Snow White and the Huntsman hits theaters June 1, 2012.

In the epic action-adventure Snow White and the Huntsman, Kristen Stewart (Twilight) plays the only person in the land fairer than the evil queen (Oscar® winner Charlize Theron) out to destroy her. But what the wicked ruler never imagined is that the young woman threatening her reign has been training in the art of war with a huntsman (Chris Hemsworth, Thor) dispatched to kill her. Sam Claflin (Pirates of the Caribbean: On Stranger Tides) joins the cast as the prince long enchanted by Snow White’s beauty and power.

We also have a new theatrical poster for The Darkest Hour, which is looking worse with each new media reveal. Chris Gorak‘s sci-fi movie sees the return of Emile Hirsch, who is paired with Olivia Thirlby and Max Minghella. The trailer wasn’t promising and the tone seems to be wildly unfocused with a mix of straight action/drama and then camp. This new poster (via Yahoo) seems to hint at the latter and that tagline does it no favors. I wish they released this one in the summer as originally planned, cause it looks like it will be lost in the shuffle of the other massive blockbusters.