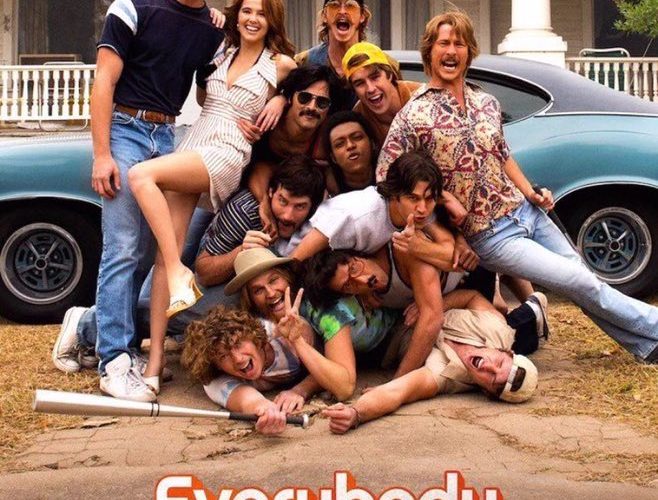 [SXSW Review] Everybody Wants Some!!

Near the end of his essay for the Criterion release of Dazed and Confused, Kent Jones writes, “[Richard] Linklater has a keen, poetic memory for exactly how we did nothing.” Like the best American directors, Linklater understands that the roots of Americana are in a formless wandering, one that was as often about bullshit as transcendence.

Everybody Wants Some!!, the spiritual sequel to his 1993 feature, is another rumination on transition, following the residents of a baseball house the weekend before classes at an unspecified college in 1980. It’s a weekend bacchanalia filled with rule-breaking parties, masculinity endurance tests, hotboxed bedrooms, closed-door hookups, and the flickers of a romance that could be about more than getting off.

Echoing the platonically ’70s ripples of “Sweet Emotion” in its predecessor, Everybody Wants Some!! opens with the stomping snares of “My Sharona.” It’s the dawn of a new era as the easy-going, sneakily joyful Jake (Blake Jenner) pulls up in his muscle car in front of his future home with only a single gym bag and a box of records. It’s the definition of fixer-up, with caving ceilings caused by poorly placed water beds and a total disregard for its condition by the residents.

Walking through the door, he’s immediately buffered by team veterans who are ready to offer advice and light sadism in equal measure. They’re not friends. They’re teammates, caught up in an endless competition with each other to conquer the world. There’s dozens of team members, and while some of them are barely more than the spectators to tightly knit chaos or one-trick ponies, the important ones make an indelible imprint.

At the top of the list is Finnegan (Glen Powell), who revels in the contradictions of his personality, as best visually represented in a perfectly detestable shot of reading Jack Kerouac and smoking a pipe. He’s an idiot philosopher, prone to ingratiatingly bizarre pick-up tactics like bragging about his small dick size, but he doesn’t discriminate in his view of the world. He may have placed himself at the top of the food chain, but he knows he’s just as weird and insecure as everyone else. The rest of the team is filled out with familiar, but well-sketched oddballs, including keyed-up windbags (Juston Street), well-meaning hayseeds (Will Brittain), preening manly men (Tyler Hoechlin), viciously competitive gamblers (Austin Amerlio), and stoner scholars (Wyatt Russell). Especially in modern-day Hollywood, outwardly jockish characters are more often heels than heroes, but Everybody Wants Some!! feels nearly anarchic in spending so much time with characters who are proud to admit their primitive natures. For the most part, these guys are unrepentant assholes, but they’re our assholes.

In contrast to recent damning period pieces, Linklater doesn’t condemn the dirtbags of Everybody Wants Some!! This is loving in more complicated, more qualified ways. And while the endless, one-sided sex talk is sure to raise some eyebrows, it’s less a problem with the dialogue than the sense that a feeling of usual universality is missing.

Calling back to Dazed and Confused, the script was giggling at women as often as standing them up as symbols of empowerment; the half-jokey, half- brilliant monologue about Gilligan’s Island as a pornographic male fantasy comes to mind. Everybody Wants Some!! feels myopic in ways that reveal the hot air in the script when it’s not digging into the id.

Much of the dialogue is laissez-faire “battle of the sexes” talk, even if it stacks the deck against the fairer sex, who are too often relegated to notches on a bed post than actual characters. It’s not like Linklater doesn’t know how to strike the balance, especially in relation to the disarmingly charming Beverly (Zooey Deutch), Jake’s crush who gives as good as she gets. With her whip-smart retorts and effortless warmth, she at times feels like some evolved alternate reality version of Linda Cardellini’s legendary Lindsay from Freaks and Geeks.

True to the time-capsule quality, Linklater is peerless for period details. It’s the wild west for grooming: there’s bushy, suspiciously glued-on mustaches, untamed beards, and perfectly mangy manes. But it’s less the set dressing and pitch-perfect soundtrack than Linklater’s use of detail as a way to build specifically set characters, whether it’s a character’s manic spinning of a grip strengthener as foreshadowing for psychotic behavior or orgasmic musings on the sound of vinyl. Linklater is still the master of perfectly calibrated tangents, such as an extended conversation about The Twilight Zone between a group of skunked men who can’t even remember whether they took a hit seconds after recovering from the last one.

Linklater’s career has long been about navigating between the petty and profound — the points when stupidity becomes genius and when the self-aware discussion of ideas becomes navel-gazing. Everybody Wants Some!! inevitably feeds off the past knowledge of Linklater’s filmography. Like Hail, Caesar! earlier this year, it’s another film that appears minor on its own, but plays like a synthesis of its director’s alternately tossed-off and straining exploration into identity politics.

In the best moments, Everybody Wants Some!! is about assimilation: a union of life-affirming music, the euphoric now, and people who have nothing and everything in common coming together. It’s the place where the gilded swoon of Hot Chocolate’s “Every 1’s A Winner” and Stiff Little Finger’s stampeding “Alternative Ulster” stand side-by-side with the characters losing themselves to that moment. It’s shameless hedonism as a flamboyant gesture.

Linklater finds a joyful freedom in these men who refuse to discriminate. They’re happy to play dress-up daily, moving from discotheques to honky tonk bars to hardcore shows without worrying that they’re compromising some form of authenticity. And even if it’s only to pick up girls, Everybody Wants Some!! gleams with a sense of possibility that most films about college attempt to emulate through spectacle rather than taking the time to get to know its own characters.

Like much of Linklater’s filmography, Everybody Wants Some!! is never about grand revelations. It’s enough that anything happened, and nobody’s going to remember the specifics in a few years. All that matters is that, like Adam Goldberg’s character in Dazed and Confused, they “got some good ones in.”

Everybody Wants Some!! opens in limited release on Wednesday, March 30.