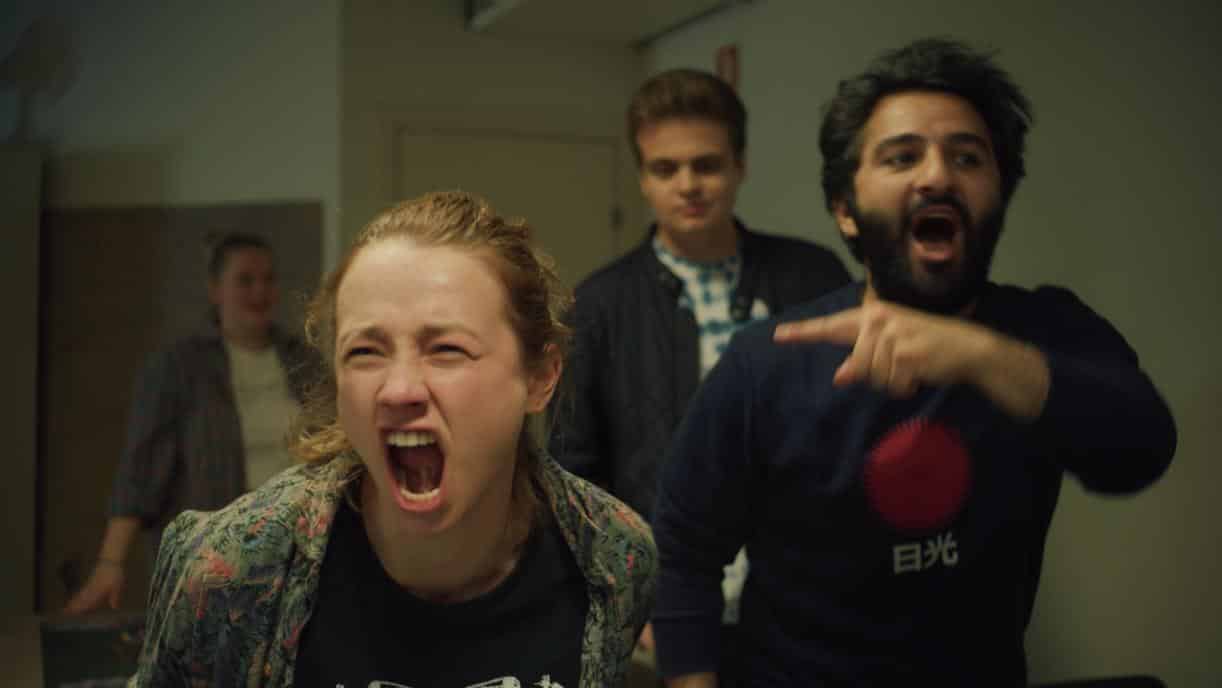 The title of 2021 Berlinale and SXSW selection Ninjababy might conjure thoughts of wacky superhero adventures; “Ninjababy” could be Astro Boy or Turbo Kid’s infant cousin. Director Yngvild Sve Flikke’s film, based on Inga H Sætre’s graphic novel, is no superhero adventure, although it is a bit wacky. Rather, Ninjababy is a delightfully unruly, genuinely moving portrait of a young woman stuck in a situation with no easy way out. Smartly plotted and downright hilarious, it features a star-making performance from lead Kristine Kujath Thorp.

In other words, do not let the title hold you back from experiencing this wonderful film. Also, do not let the plot summary impede your interest. While the storyline may seem familiar, the characterizations and raucous humor are not. Thorp plays Rakel, an adrift 23-year-old unsure of what’s to come. She is a good-natured screw-up, a graphic design dropout and would-be comic book artist whose life mostly consists of hanging out with her roommate Ingrid (Tora Dietrichson), working on drawings, and thinking.

Rakel also misses the warning signs that she may be pregnant. (Ingrid eyes her suspiciously: “What happened to your tits? They’re a lot bigger.”) The realization that she is, indeed, expecting a child is a shocker. An even greater shock is the news that she is six months pregnant. That is too late for an abortion, and upends Rakel’s life completely. (“Take those fucking pills and stuff them up the pill hole,” she pleads with a nurse.) Another element of the six-month-news is that the man Rakel thought was the father––sweet aikido instructor Mos (Nader Khademi)––most certainly is not.

“It could be anyone. You banged loads,” Ingrid says. “Rakel, this is like Mamma Mia.” Soon, Rakel realizes dad must be the aimless, always-ready-for-sex “Dick Jesus,” played by Arthur Berning. (No spoilers for why he has earned that nickname.) The press notes make what comes next sound a bit silly: “That’s when Ninjababy, an animated character who insists on making Rakel’s everyday life a living hell, turns up. He climbs out from her note book, jumps into her tea cup, and keeps reminding her what a terrible person she is.”

There’s nothing inaccurate there, really. However, it is much more clever, much funnier, and much sweeter than it may sound. As Rakel ponders what to do with sneaky Ninjababy, she must also deal with her tangled love life, her desire to be an artist, and the physical changes wrought by pregnancy. Even the decision for Rakel’s half-sister to adopt the baby leads to complicated comedy; the scene in which Rakel, the father (Dick Jesus), the not-father (Mos), the half-sister, and Ingrid are forced into an explosive conversation is one of the film’s best.

Part of what makes Ninjababy so special is its unpredictable narrative. The script by Johan Fasting defies expectations at almost every turn. Yes, there is still the expected (and hoped-for) character growth, but it is a believable arc. While Rakel has changed by the film’s end she is not a completely different person. Fasting and Flikke know that’s not how real-life works––things are far messier than that.

Much credit goes to the filmmakers, as well as the animation, but perhaps the most notable reason for Ninjababy’s success is the performance of its star. Thorp makes Rakel feel utterly real. It is easy to identify with her plight, and understand the complexity of her situation. Full of topsy-turvy emotions, wild humor, and constant believability, Ninjababy is one of 2021’s outright joys. It deserves a worldwide audience, and announces Thorp and Flikke as major talents.