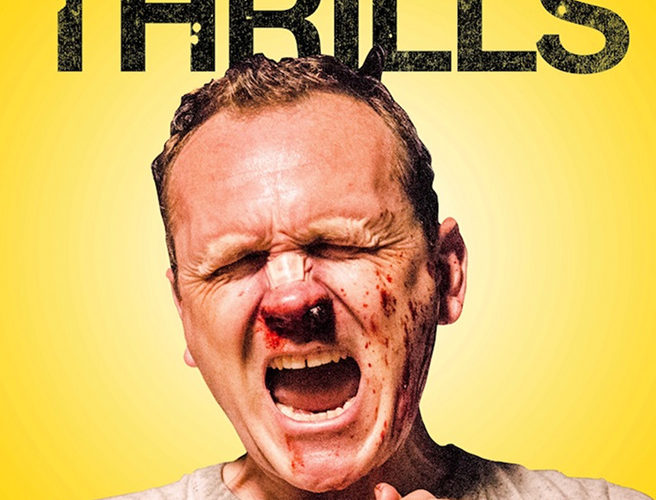 Every now and then a film completely sideswipes your mental capacities and takes over. Since seeing Cheap Thrills at a midnight screening on Tuesday night at SXSW, I’ve hardly been able to get the film out of my head. It’s stuck there, jabbing me every dozen minutes and reminding me how much I was in its deathgrip for around 90 minutes. There is very little fat to this work, a good sign, considering I don’t know if I could have taken any more visceral punishment. The stakes, the violence and the intensity were constantly moving higher as each minute ticked away.

The film follows a man that is down and out. Craig (Pat Healy) is working at a garage, supporting his wife and young kid, and trying to keep things from falling apart. The victim of downsizing, he’s suddenly without a job and facing an eviction notice. So he decides to blow off some steam, escape for a little while, and down a beer or two. That’s when he runs into an old high school friend named Vince (Ethan Embry). Vince is adamant that they spend some time together, and so they drink a bit more and swap life stories of what’s been happening. Across the bar is a wealthy couple that takes an interest in them and decides to buy them some shots. You see, it’s Violet’s (Sara Paxton) birthday, the hot wife of Colin (David Koechner) and they want to celebrate. Hilariously, the first hour or so she seems to be constantly on her phone, texting and messaging someone on the other line. The two want to celebrate in a different way, so they challenge Craig and Vince to different tasks as dares for cold, hard cash. They are having a blast. At one point they are challenged to get slapped by a particular girl in the bar. Craig can’t go through with it, but Vince cleverly tells her that he’ll buy her next round if she slaps him. The bet starts at $50, but quickly gets into the triple and quadruple digits as the stakes rise. After a mishap at a strip club, they return to Colin and Violet’s place. Craig is fueled by the idea that this is quick cash, but eventually becomes wary, until the money is enough to suddenly rid him of his problems for a while. As the night goes on, things continue to ramp up until you’re literally gasping for breath between dares.

Some of them are grotesque, while others are downright funny. Through this, Vince and Craig’s characters are revealed. When the sheer amount of money that Violet and Colin have on hand is uncovered, things start to suddenly warp. This is the first film for young director E. L. Katz, and he’s already on quite a pedestal. This is a thriller that has no boundaries — nothing is off limits. What price would it take to make you do things of increasing moral gray area? What about downright wrong? Is anything off-limits no matter the cash put forth? On the surface, Cheap Thrills is a terrifyingly gnarly look at our human limits, but underneath is a cleverness and exploration of its themes that truly shine.

Cheap Thrills was picked up by Drafthouse Films with a planned VOD and theatrical release.