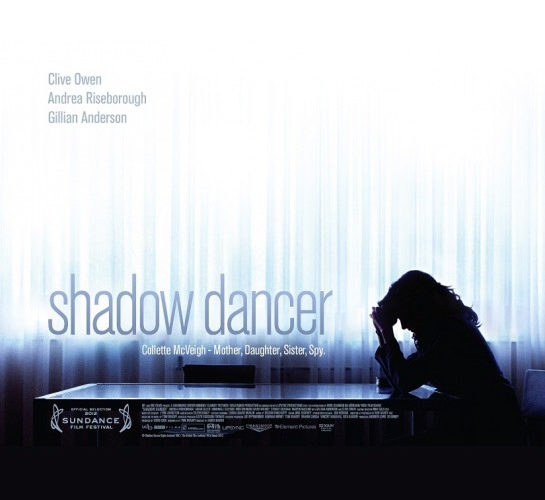 After the Sundance award-winning documentaries Project Nim and Man on Wire director James Marsh returns to Park City with a narrative feature: the tense, but occasionally dry IRA thriller Shadow Dancer. Andrea Riseborough stars as Collette McVeigh, whose brother is killed in an IRA conflict as a child. Twenty years later she continues her dedication to the mission, with a bomb attempt of her own in London.

After it does not go as planned, McVeigh is captured by MI5 officer Mac (Clive Owen), who gives her the option to become a mole or go straight to prison. Reluctantly taking the former option, she heads back home and begins passing along information about her brothers Gerry (Aidan Gillen) and Connor (Domhnall Gleeson) in weekly meetings with Mac at a desolate park by the sea.

Adapted by Tom Bradby from his own novel, Marsh’s slow-burn thriller excels when it is at its most tense. Riseborough remains in a constant state of anxiety as she takes part in assassination attempts and heated exchanges, all while someone in the opposition (now coming from both sides) could be right around the corner. Clive Owen is finally in a quality role, after a string duds, playing a government official with the suave demeanor one would expect.

If one takes Tinker, Tailor, Soldier, Spy and removes density of that script, you have something like Shadow Dancer, with its similar washed-out palette, meditated compositions and vigorous score. Though Marsh is so restrained that third act plot reveals don’t land as well as they should, but thanks to strong performances and not dumbing down the tight approach, Shadow Dancer proves Marsh can do just as well with a fictional narrative. Check out expanded impressions below in video from with Dan Mecca and Raffi Asdourian.