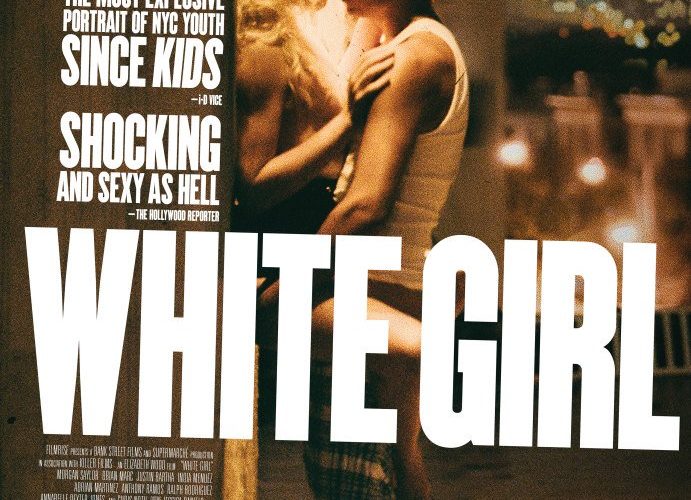 Testing the patience and sanity of its audience, White Girl plays like one of those nights where a friend lets their freak flag fly while you’re the sober one explaining why what they are about to suggest is not a great idea and will probably get you arrested. We’ve all been there before, usually around sophomore year of college, which is where Leah (Morgan Saylor) finds herself.

White Girl is a more than simple voyeurism, watching a pretty junky’s downfall as she does things the patriarchy would loudly object to. The lessons along the way are not quite learned as Leah adapts to street life using her sexuality and drug stash to get herself in and out of trouble. White Girl presents a bleak picture even if it offers some liveliness along the way; it’s not all doom and gloom, rather there’s a real love story at its core. Leah proves to be a ride-or-die girl, not a white girl going through a phase, as alarming as it appears to be — perhaps it’s her white guilt talking.

The film opens simply enough. Leah and her pal Katie (India Menuez) move into a small apartment in Ridgewood, Queens. They are both causal drug users and become fascinated with the Latino boys that hang out on the street corner, notably Blue (Brian “Sene” Marc). Leah works as an unpaid intern at BAD, a hipster magazine that apparently is very permissive of in-office hook-ups with the boss Kelly (Justin Bartha) as one frank scene early on sets the table for what’s to come.

After Blue supplies a BAD VIP party, he discovers real money can be made peddling to white hipster. His distributor Lloyd (Adrian Martinez) reluctantly fronts Blue $7,000 in coke and the plan is set in motion: use Leah’s hook-up into the white hipster world to move grams. The plan is delayed by a stop and frisk arrest in which the NYPD captures only what’s on Blue. Leah has the rest, forcing her into a moral quandary which she gleefully does the wrong thing for Blue.

Director and writer Elizabeth Wood gleefully never commits to one plot point or another, continually shifting its energy and shape, growing darker and more rotten at its core, unafraid of reaching into the darkest of recesses. Leah has never met a line of coke or MDA she doesn’t snort, at one point playfully doing a line of coke off her boss’s cock in a club restroom.

I admire the tenacity and fearlessness of Wood to take on these issues head-on. In a playground of stripped-down indies of rough edges, encouraging sparse narratives, understatement and minimalism, Elizabeth Wood has made a film that feels fresh even if it offers little introspection and commentary on the fire that it plays with. And thus is the flaw of White Girl. I’m not quite sure what Wood is saying, although does it matter? Asking us to do the heavily lifting has provoked a lively debate amongst viewers who either love it or hate it (as should be the case with art). White Girl, like Leah, refuses to fall into a neat box. For a girl from the Midwest, she proves to be savvy, getting exactly what she wants even if the consequences are dire and deprived.

White Girl premiered at the 2016 Sundance Film Festival and opens on September 2.