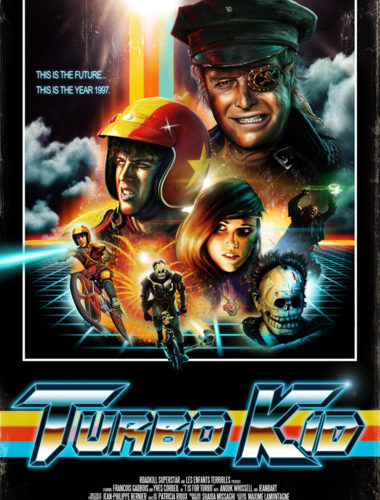 Playing like an explosion at the Cannon Films factory, Turbo Kid is part Mad Max, part Nintendo movie classic, and part The Wizard with a sinister midnight madness sense of humor. While occasionally running out of steam, Turbo Kid has moments that are truly horrifying — it doesn’t sacrifice on the blood and gore, nor does it take itself too seriously. It’s a B-movie that knows it’s a B-movie, if little else.

Taking place in the outback and set in the “distant future” of 1997, Munro Chambers is plays “The Kid,” left alone in an isolated landscape to fend for himself against the odds. Just as it is in the Third World, clean, safe water has become power; the earth is poisoned in the wake of a nuclear holocaust and water has been commodified by the evil Zeus (Michael Ironside). He and his biker gang plan to expand production of potable water by juicing his enemies alive, for the water content found in their bodies. The last hope is Turbo Man, a comic book hero of myth like Captain America, but unfortunately he has failed. Rummaging through the landscape, “The Kid” stumbles across an important artifact of this mythic hero: his suit. Like the mysterious jeans at the center of The Sisterhood of the Traveling Paints, it fits and “The Kid” becomes “Turbo Kid.” Forming an unlikely alliance with a friendship-bot Apple (Laurence LaBeouf) and rouge Fredric (Aaron Jeffrey), Turbo Kid could be read as an awkward coming-of-age story, but the agenda at hand, as a shallow as it may be, is fun.

Existing entirely as an artifact of the 1980’s, it walks the line between balls-to-the-walls action and one of those “creepy” family movies like The Garbage Pail Kids. With the goofy violence turned up to 10, Turbo Kid – which boasts three writer/directors (Francois Simard, Anouk Whissell and Yoann-Karl Whissell) — throws in a little heart for the revisionists, as the relationship between Apple and The Kid is quite sweet. Gender roles too have been somewhat revised, and thankfully so, as the attitudes towards women that existed within the more sexiest pictures of the Cannon Films cannon are not present here. Turbo Kid lacks some of the brilliance that a revisionist thriller might embrace — in a more ambitious film, Zeus could be an avatar of Dick Cheney; it’s strictly focused on throwback. In the action department it more than delivers, while a mainstream throwback would cop out, Simard and the Whissells don’t compromise.

As far midnight movies go, Turbo Kid may not be a classic, but simply a good time. While its second act may drag a bit, things are picked back up for its third. It is what it is, but lacking in political ambitions that might have made for a richer experience. Then again, it’s a midnighter: if you’re thinking about all of that, you’re in the wrong theatre.

Turbo Kid is now playing at the Sundance Film Festival and opens on August 28th.