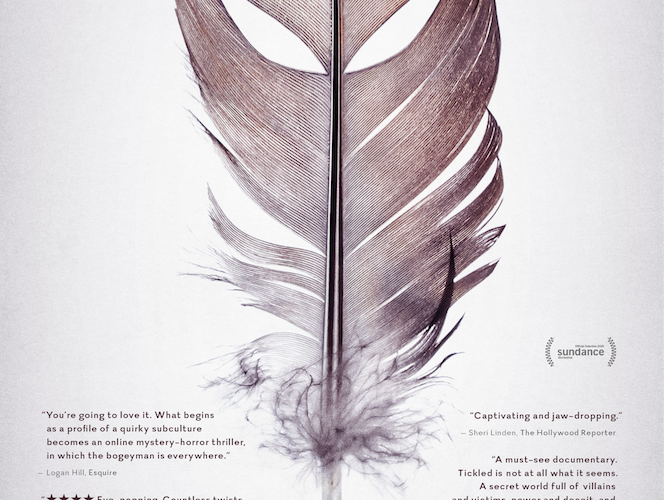 New Zealand entertainment reporter David Farrier discovered possibly the oddest conspiracy to yet feature in nonfiction film. Farrier came across Internet videos of “competitive endurance tickling,” in which strapping young men are strapped to chairs and ceaselessly tickled by other strapping young men. When he reached out to the company behind the videos for a story about the “sport,” he was met with a bafflingly vicious response, full of homophobic attacks and legal threats. Naturally, this only aroused Farrier’s curiosity further, and he set out to uncover just who was behind these poorly disguised fetish videos. In the process, he and co-director Dylan Reeve unravel an escalatingly bizarre web of intrigue.

I’m generally in the bag for documentary material this weird, but Tickled too often gets in its own way. Though it makes sense that Farrier centers the narrative on himself as the main character, digging through the truth, this manifests mostly as him blandly narrating his way through the investigation. The film frequently elides the vital details of just what leads them from one clue to the next. This is most glaring in how the movie pivots from one thread to a supposedly disconnected one a third of the way through, only to reveal that they are in fact linked. This comes across as a staggeringly unlikely coincidence. Farrier will always state in voiceover exactly how the viewer should feel about what’s going on, even though there’s much better natural humor arising from the situations he engineers. A scene in which he “confronts” a trio of lawyers as they arrive at the airport with a friendly welcome sign is a miniature masterwork of both awkwardness and abrupt dread.

The filmmakers also seem unsure of how to handle their subject matter. While criminal activity on the part of the orchestrators of the tickling videos become apparent, there’s nothing inherently bad about the fetish itself, even if the majority of people will be more put off by it than anything else. Farrier and Reeve seem to realize this, and do their best not to mock the young men in the videos, whom we learn were often tricked into their participation. Still, a sequence built around the (consensual) production of such a video aims for laughs, which is all the more off-putting given that it doesn’t really have anything to do with the topic at hand, which is the illusive pyramid of deceit and blackmail that’s capitalizing on the fetish.

Tickled gradually turns out to be about how even the most random phenomenon can become an instrument of extortion and manipulation. The shadowy villain bankrolling the creation of the tickling videos and subsequently threatening the actors involved and anyone who probes into the operation turns out to be both pitiably sad and unnervingly wealthy. Unwittingly, Farrier stumbled into an excellent model of corporate exploitation of human pleasure. And yet he and Reeve just end the film with the revelation of their enemy’s identity, as if there’s nothing more to be said, when in fact there’s so much more to look into.

Tickled premiered at the 2016 Sundance Film Festival and opens on June 17.