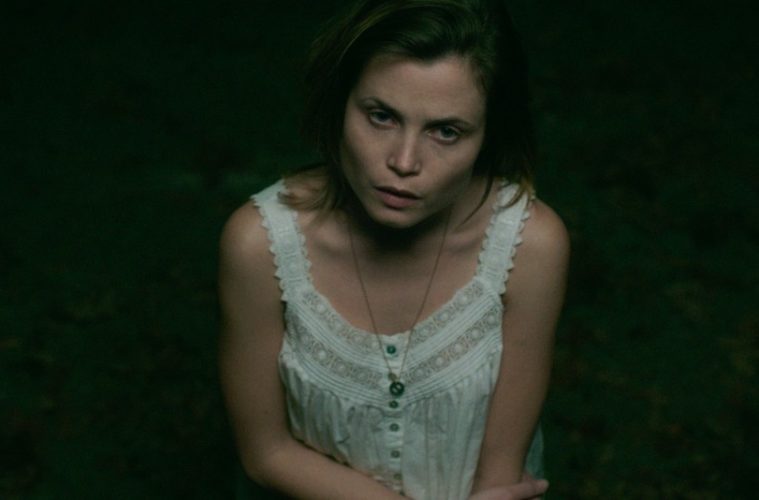 Clearly inheriting its thematic ambition from the old adage of “less is more,” The Sleepwalker takes a good long while to do not too much, and although the journey is riddled with some beautiful lensing, top-notch acting, and a very memorable score, the audience is left wanting more.

Directed by Mona Fastvold, from a screenplay by Fastvold and star Brady Corbet, The Sleepwalker tells the story of Kaia (Gitte Witt) and Andrew (Christopher Abbott), a young couple determined to renovate Kaia’s late father’s home, nestled in the middle of a secluded Massachusetts. Plans change when Kaia gets a late-night call from her half-sister Christine (Stephanie Ellis), who’s pregnant, engaged, and looking to spend some quality time at the old home. Christine’s fiancé, Ira (Corbet), appears the next morning, bringing with him an upper-class snobbery to which working-class Andrew does not respond well — and, so, with all four of our players finally under the same roof, secrets slowly creep their way to the surface.

As though aware of a lack of narrative movement throughout, Fastvold employs the immense talents of her musician husband, Sondre Lerche, for the score, which drives the film when it seems to have nowhere left to go. Not unlike most of the festival fare Corbet has helped bring to life (Simon Killer immediately comes to mind), The Sleepwalker has a decidedly internalized tone throughout, our characters rarely telegraphing their thoughts and frequently speaking in half-truths.

It’s at times aggravating as a plot device, other times fascinating in what it allows the audience to interpret. Unfortunately, the closer we move to some sort of conclusion, the clearer it becomes that no ending will truly satisfy. Too often, Fastvold plays non-committal with the emotional arcs of these people; these are less characters, more archetypes. Any answer breeds more questions, and while that does allow for some healthy post-screening discussion, it also suggests that not enough decisions were actually made during production.

All leads are very impressive here, doing their best to build on some loose narrative footing. Abbott particularly feels right in his role as blue-collar odd man out, expanding his range and highlighting his potential as a future leading man. Similarly, Fastvold, despite the film’s problems, does good work here and is a talent to watch and support. Seen as a single entity, The Sleepwalker is a good movie stuck between too much style and too little direction.

The Sleepwalker premiered at Sundance Film Festival 2014. One can see the trailer here and read our full coverage of the festival below.