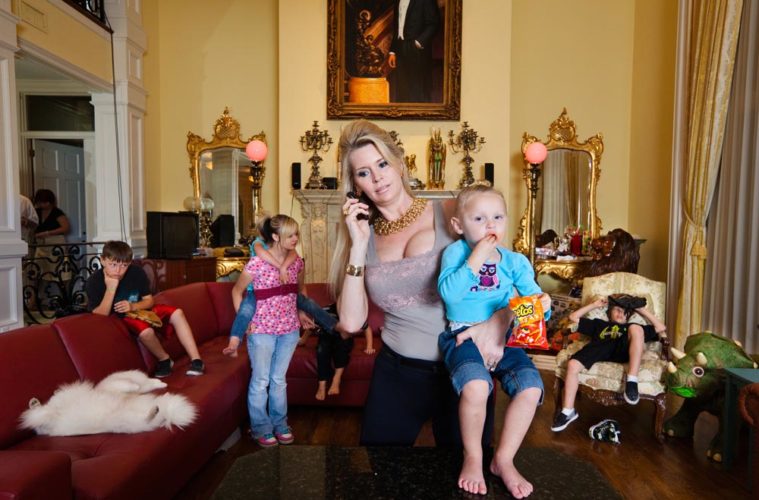 [Sundance Review] The Queen of Versailles

The opening night film of this year’s Sundance immediately drew both controversy and publicity because one of its subjects decided to sue both the filmmaker and festival over an unflattering description in the programming guide. It’s a fitting conclusion for a documentary about image, money, success, failure and the deceitful American dream. Director Lauren Greenfield (Thin), perhaps better known for her photography work, brings a provocative inside look of one of America’s richest families as they prepare to construct the largest and most expensive house imaginable. It’s a reflection not only of our own insatiable greed and desire for more but also a fitting parable of the fundamental problem that led to the housing crisis. Despite this twisted tapestry of a story, The Queen of Versailles never feels like the complete portrait that it strives to be.

Jackie and David Siegel are a disgustingly rich couple with thirty years of age separating the two. They have eight kids, several maids, nannies and a handful of property all over the country. David is a real-estate mogul having made his fortune by spearheading timeshare properties in Florida. Seemingly having outgrown their already enormous mansion, the couple decides to build a castle fit for a king based off the design and style of the palace of Versailles in France. The specs and price of the house are absolutely insane, a ninety thousand square foot property for the cost of a cool hundred million. But just when everything in paradise seems to be too good to be true, the devastating housing crisis of 2008 rears its ugly head and foreclosure is right around the corner for millions of Americans. Jackie and David Siegel are not safe from the economic crisis and are forced to cut down on their lavish lifestyle while their palace of Versailles remains in construction limbo. The documentary is a sobering tale of those who become slaves to wealth and overwhelming greed that capitalism has instilled. Jackie doesn’t seem to understand how to stop her addiction of spending and the house becomes overcrowded with toys, pets and poop. At one point David claims that he was the one who got George W. Bush elected in 2000 but that he shouldn’t talk about it because its kind of illegal. It’s the type of film that the Occupy Wall Street movement would use as evidence as to how excess and greed corrupts the mind and soul. Indeed David Siegel comes off as shrewd and heartless, cold to both his wife and children in favor of stacks of paper decrying his imminent doom. But its Jackie hopelessness in thinking her life is perfect that is the greatest irony of all.

Despite all this, there is a big gap missing to the film: a third act or conclusion. The final moments where karma has suddenly caught up to the Siegels abruptly ends with title cards explaining the ongoing problems the family is still having. It’s kind of like the ending of a season of Bravo’s The Real Housewives. Had Greenfield stuck with her subjects a bit longer or found a better conclusion note to end on, the film might feel more complete as a whole statement. Instead, Queen of Versailles is a thought-provoking and entertaining examination of our culture of greed that can’t shake the feeling of reality television.