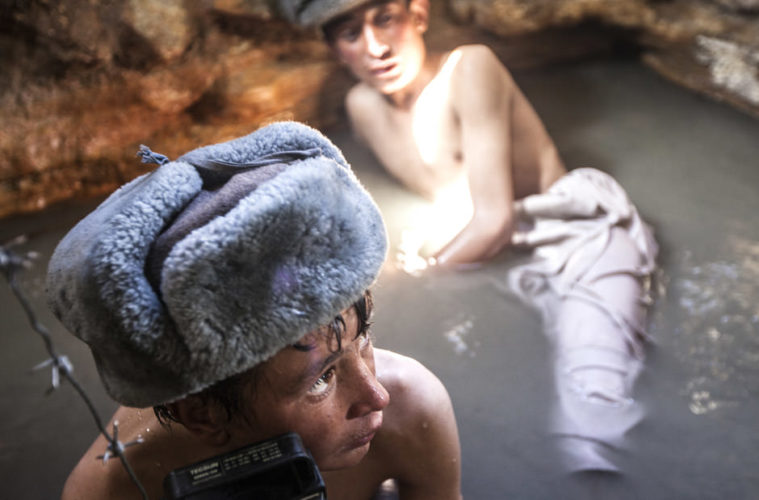 [Sundance Review] The Land of the Enlightened

Performance and recreation have a greater presence in documentaries at this year’s Sundance than in many past. Pieter-Jan De Pue‘s The Land of the Enlightened, like A Flag Without a Country in particular, foregoes making its subjects talk about their lives in favor of turning them into re-enactors of themselves. Shot over the course of seven years in Afghanistan, this film uses unreality to protect its own integrity while still making immediate some glimpses of reality’s horrors. This is mainly about children in harrowing situations who are often doing extraordinarily dangerous things. It would be difficult, if not impossible, to actually film them in action without being hideously exploitative — which is not even to mention how hazardous it would be for the crew. Instead, the filmmakers help the children “put on a show” of sorts about their daily lives.

In the midst of the then-ongoing American occupation of Afghanistan, said lives are seen as a hard-nosed toil for survival. The documentary follows several different groups of kids living in the remote northern reaches of the country; most are pre-teen boys, and most participate in a kind of makeshift underground commerce. One group scavenges spent bullet and shell casings or trades for them with American forces. Another group digs up undetonated ordnance. Another uses that ordnance to mine lapis lazuli. Yet another forces travelers carrying goods, sometimes said lapis lazuli, to pay a toll for safe passage. They often pay in bullets received from the Americans.

The movie does not hold up its young characters for pity or shock. It is unflinchingly matter-of-fact about them, dispassionately watching as they do everything from slaughter a goat to prime a land mine for demolition. Any canny viewer can spot the edits that delineate what’s probably real (e.g. the exploding of the mine) with what is probably performed for the camera (e.g. the delicate preparation of the explosive). At its best, the film plays the two elements together for visceral effect. An American mountain outpost bombarding the slope opposite them is cut with footage of a hawk or eagle hunting, the bird’s poised hovering and diving perfectly timed with the firing of the guns.

Other footage of the American troops is less interesting, focused as it is more on boredom and lulls than action, much in the way the sections following the kids are. It doesn’t help that these parts are mostly (if not entirely) in a standard documentary mode, simply observing what’s probably mostly real incidents, and thus stylistically does not feel of a piece with the rest of this film.

But these scenes do have a role to play in the overarching narrative. The ethnographic network of The Land of the Enlightened ties together not only disparate parts of modern Afghanistan, but also the country’s past, going back to the prehistoric era. Sar-i Sang, the lapis lazuli mine seen in the film, has been in use for over 7,000 years. The gang of robber boys live in an abandoned military base from the time of the Soviet occupation. A voiceover relates Afghan creation myths over epic shots of the mountains and deserts. In this context, we see that the American invasion is merely the latest in a long line of attempts by outsiders to bend Afghanistan to their will. And it demonstrates why they always fail.

The Land of the Enlightened premiered at the 2016 Sundance Film Festival.