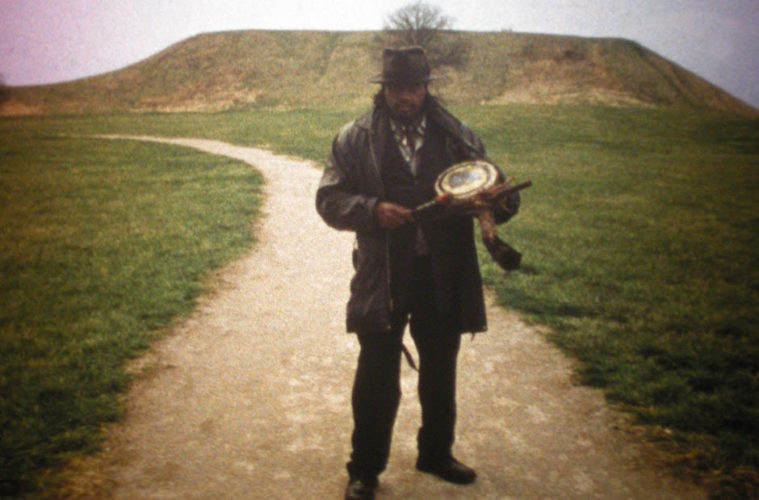 In 11 chapters occupying a mere hour’s running time, The Illinois Parables biographizes the namesake state from prehistory to the present. Each segment is tied to a specific town or locale in Illinois — which, as the official descriptions of the film assert, is “often called a miniature version of America.” This idea might best be summed up by the first chapter, in which a black man in Native American garb performs a traditional song in front of a pre-Columbian earthen mound. That thread of mixing cultures continues through stories of displacement and resettlement. It’s present both in chapters about the Trail of Tears and about the death of Joseph Smith. With geographical fixtures as its focal points, Deborah Stratman’s experimental documentary browses how people unite around narratives tied to places.

We learn of how the town of Nauvoo, established by migrating Mormons in 1839, was a colony of the Icarians, a utopian socialist movement, from 1849 to 1856. In 1969 Chicago, police reenact what they claim happened when they raided the apartment of Fred Hampton, a rising star in the Black Panther Party. The holes in their story are gaping, but Hampton is already dead and, as in the case of Joseph Smith, a would-be messiah has been ended. People move, rally to a symbol, and then are scattered by greater authorities.

Stratman presents this through unshowy 16mm footage, enhancing the feeling of going on an old-fashioned historical road trip. With notable exceptions such as the aforementioned Native song player, the lens trains itself less on humans than it does on signposts, building facades, landscapes, and old footage. The human element is expressed more in the abstract of stories than in apparent personages. Even the most prominent inclusion of flesh-and-blood people comes in the form of the police and FBI agents demonstrating their version of Thompson’s death, puppets putting on a show instead of independent beings.

The Illinois Parables feels longer than its runtime. Though the cumulative effect of the so-called parables is intriguing, most of them aren’t too impressive on their own. Some segments, such as a brief math lesson, barely seem to connect to the rest at all. But the documentary’s vision of history as tied to spaces is more difficult to dismiss than its apparent weaknesses would suggest.

The Illinois Parables premiered at the 2016 Sundance Film Festival.