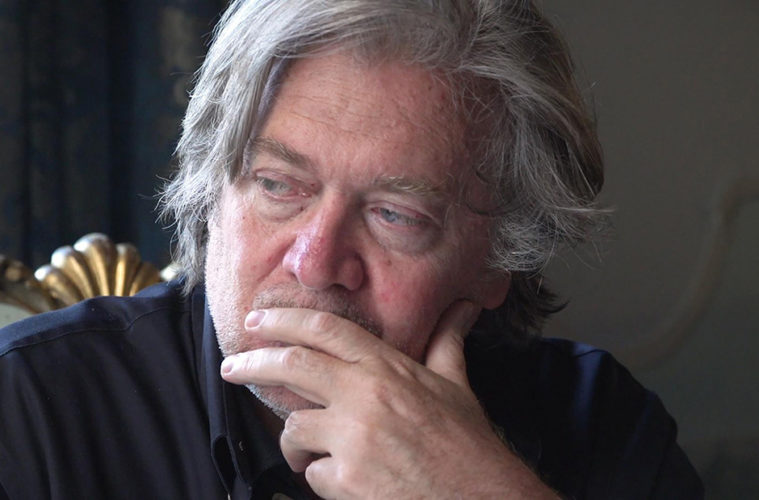 One of the unfortunate byproducts of living under the Trump administration is being necessarily aware of ancillary right-wing partisans that have contributed to his reign. Familiarity with names like Roger Stone, Paul Manafort, Stephen Miller, Sebastian Gorka, Milo Yiannopoulos, and Alex Jones are all but mandatory for understanding the ideological machinations behind such a presidency, even if the ultimate conclusion can be accurately reduced to, “The cruelty is the point.” When the inmates have taken over the asylum, it’s important to know their various afflictions.

Steve Bannon—Breitbart co-founder, avowed (white) nationalist, chief executive officer of Trump’s 2016 presidential campaign, White House chief strategist from January to August 2017, founder of nonprofit organization The Movement designed to promote economic nationalism in Europe—has arguably garnered more public interest than any other Trump-adjacent figure. He’s largely responsible for mainstreaming the alt-right political platform, initially disseminated via Breitbart and then normalized as opposition during the Obama administration. His brand of reactionary populist politics defined Trump’s campaign strategy in 2016. Before being ousted from the White House following the violent aftermath of the Unite the Right rally in Charlottesville, he was reported to have immense sway over Trump’s domestic and foreign agenda. It’s tempting to dismiss Bannon as a fascist loon, but his just-right-of-Attila-the-Hun worldview has come to dominate current American politics. He requires at least some attention.

So how does one craft a character study of Bannon? Director Alison Klayman (Ai Weiwei: Never Sorry) adopts the vérité approach for her documentary The Brink, a profile of Bannon that chronicles his post-White House life through the 2018 midterm elections. She embedded herself in Bannon’s inner circle for an entire year as he embarks on a media tour designed to rebrand his image as the leader of a global populist movement. We see him lead speaking engagements, strategize with advisors on how best to support Trump-approved congressional candidates, and make in-roads with European populist parties in preparation for the European Parliament elections in 2019. His ostensible goal is to curb the tide of globalism and support the power structure upheld by nationalist leaders.

Klayman gained access to Bannon through her producer Marie Therese Guirgis (Author: The JT LeRoy Story), who previously worked at Wellspring Media, a film distribution company that was bought out by American Vantage Media Corp., an investment group headed by Bannon. Guirgis, a professed progressive, worked under Bannon for a few years, where they had a “mutually respectful and unusually candid relationship” (per press notes), and maintained contact with him in the 00s until he had completely enveloped himself in right-wing politics around the rise of the Tea Party movement. Guirgis’ connection to Bannon could be considered suspect under a broad critique of the film industry’s cozy relationship with less-than-admirable financial backers, but it doesn’t lend The Brink a rehabilitative or hagiographic agenda. Klayman’s intentions are foregrounded in The Brink’s first scene, which features Bannon discussing his trip to concentration camp sites while filming his 2016 film Torchbearer, starring Duck Dynasty’s Phil Robertson, and waxing poetic about “the evil that men can do” over B-roll of Washington D.C. She frequently employs ironic juxtapositions Bannon’s self-mythology and the complicated political climate, depicting how some of his domestic efforts, like Roy Moore’s failed Senate bid, failed in spite of his certainty. Her fly-on-the-wall technique provides the audience with an intimate view of Bannon’s routine, but maintains enough distance to register an implicit critique of his actions and beliefs. There’s no ambiguity as to where The Brink stands on Bannon’s ideology.

Klayman sidesteps many glorification traps by never directly interviewing Bannon, knowing he can spin it in his favor. She does call him out from behind the camera at key moments, e.g. the contradiction between his disdain for liberal victimization and his latest film, Trump @ War, which traffics in white working class identity politics, or how his use of “globalism” as an anti-Semitic dog whistle might have contributed to events like the Tree of Life massacre. Nevertheless, Klayman provides a front-and-center view of Bannon as he frequently preaches nationalist rhetoric. We see him gleefully collaborate and conspire on various global initiatives to spread hate and marginalization. Even though the film ends with Bannon’s disappointment with the midterm election results, it doesn’t mean we haven’t been immersed in his worldview. Depiction doesn’t equal endorsement in The Brink, but anyone looking for positive depictions of Bannon can find it in Klayman’s film if they so desire.

However, the likelihood of The Brink reaching a conservative or alt-right audience, let alone an audience somehow undecided on Bannon, is minimal, making any potential danger of validating radical right-wing beliefs a moot point. The vast majority of the people watching The Brink have their minds made up about Bannon and will not be swayed by his flamboyant rhetoric. At the same time, it’s difficult to pinpoint what exactly Klayman accomplishes with her film beyond a mere political horror show one can safely view from behind proverbial Plexiglas. Guirgis conceived The Brink as an attempt to demystify Bannon, to reveal that he’s not some evil mastermind but really a charismatic salesman driven by self-interest. Let’s assume, for a moment, that The Brink achieves this objective, that Klayman successfully “exposed” Bannon as a down-to-Earth political operative as opposed to literally being Darth Vader. Is that really a compelling or edifying conclusion following a yearlong tour with the guy? That he, like all of us, contains some recognizable humanity?

Of course Bannon has humanity. Of course he can be a personable, funny guy when he’s hanging out and talking shop. Of course he’s self-aware about his cultural role and how he can exploit it for personal and professional gain. Of course he can be nice, even to his enemies. Klayman and Guirgis seem to believe that the general public thinks Bannon actually spends his time cackling like a comic-book villain, and maybe some of them do, but making a whole documentary to debunk such a flimsy thesis feels like a waste. For 90 minutes, we see Bannon take meetings and yell at aides on the phone and mingle at photo ops and spew vile falsehoods in private and in front of adoring crowds, all in service of the most simplistic takeaway imaginable: that the monsters in our midst look and sound like us instead of grotesque Harryhausen creatures. Sorry to be blunt, but no shit.

The Brink premiered at the Sundance Film Festival and opens on March 29.