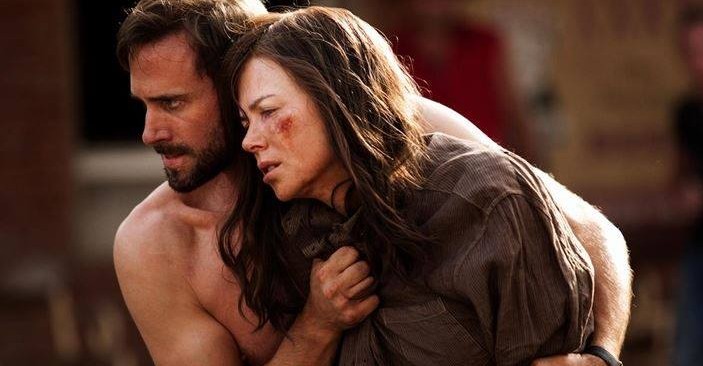 It’s not easy to watch a family disintegrate before your eyes. Kim Farrant’s directorial debut, the Aussie drama Strangerland, follows Catherine Parker (Nicole Kidman) and her husband Matthew (Joseph Fiennes) as they fight together to hold on to their family and their sanity the wake of their children’s disappearance on the eve of a devastating dust storm.

As the Parker family deals with its fair share of secrets and shame, Kidman gives one of her best performances in recent years. Displaying a vulnerability and depth that has not been seen since her appearance in The Paperboy, Kidman’s Catherine is engaging and heartbreaking as she begins to unravel at the loss of her children. Fiennes’ Matthew is just as broken as his wife, displaying equal parts of affection and cruelty. Matthew struggles with his responsibility to protect his children versus his wish to punish them for their misbehavior. Both husband and wife suffer from a lack of intimacy, neither willing to accept the blame for their children’s disappearance. If the parents are the driving force in Strangerland, then the children are its soul. The 15-year-old boy-crazed Lily (Maddison Brown) and the younger, quiet Tom (Nicholas Hamilton) both feel trapped in their “shit-hole of a town.” Eager for an escape, Tom retreats to midnight walks, while Lily does everything she can to gain the attention of the neighborhood boys. Lily’s blatant sexual attitude and wardrobe in the first quarter of the film are unnerving as we’re left wondering if they are the behaviors of a teenager simply “acting out” or if there are deeper psychological issues at hand.

It is Lily’s behavior that drives a wedge between her parents and forces them to have secrets they would prefer to keep from their neighbor, especially local, by-the-book police officer Rae (Hugo Weaving). Weaving does an expert job at playing one of the few truly honorable men in Strangerland’s fictional town of Nathgari. Rae simply wishes to follow the leads and get the children back home safe.

While the plot can feel over-extended at points, often suffering from melodrama that seems to go from zero to one hundred in a second, it is Kidman and Fiennes’ expert balance of their characters’ noble and deplorable acts that keep the viewer wanting more. Strangerland is made complete by an eerie score from Keefus Ciancia (True Detective) and cinematography from P.J. Dillon (Game of Thrones, Vikings), making suitable use out of its vast landscape. While many moments of Strangerland can be hard to watch, one certainly does not want to look away.

Strangerland premiered at Sundance Film Festival and will be released by Alchemy.