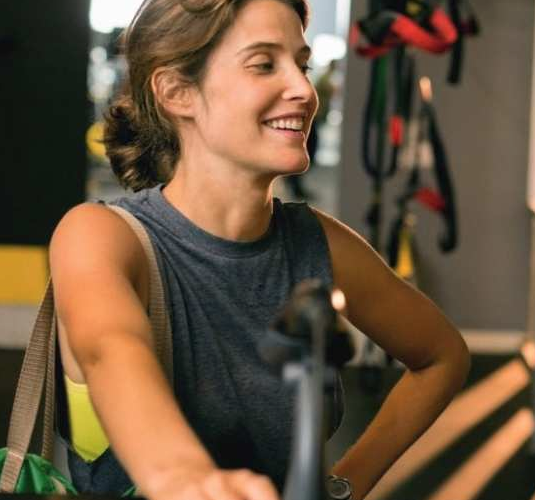 Certain movies coast by on the charm of their cast, and that’s pretty much the case with writer-director Andrew Bujalski‘s Results. That’s not to say the film completely rests on the shoulders of the talent assembled, but if there’s one major reason why the film ultimately succeeds, it’s because of this pack of reliable actors turning in entertaining performances.

Starring Guy Pearce, Kevin Corrigan, Cobie Smulders, Giovanni Ribisi, Michael Anthony Hall, and Brooklyn Decker, Results shows some of the ins-and-outs of the physical fitness world. Gym owner Trevor (Pearce), is about as optimistic as one can be, but the same cannot be said for one of his employed personal trainers, Kat (Smulders), who’s completely jaded and has somewhat of an anger issue. She’s fooled around with Trevor in the past, but their relationship has never been serious. Kat’s life becomes more complicated when she meets Danny (Corrigan), a divorced rich guy with nothing but time and money. Danny falls for his trainer and tries to awkwardly court her, she reaches her breaking point.

Bujalski’s script actually focuses more on Danny’s storyline than Kat and Trevor’s, almost to a fault. Nothing against Corrigan, who’s excellent as Danny, but it’s not a very even-handed narrative. In the first half of the film there’s not nearly enough focus on Trevor and Kat to justify a second half focus that is not fully earned in the build-up.

Results plays as a rough cut, held back by some scenes and beats better suited for the cutting room floor. Even Danny’s introduction is unnecessary: we see his heart broken, but we’re told enough about it later on we don’t really need to see that opening. There’s a shagginess to the script, which, in turn, makes Results somewhat of a flabby picture (no pun intended). What’s needed is a tighter narrative and a more taut pace. At 90 or 95 minutes, Bujalski’s 105-minute long romantic comedy could become a movie that lives up to its cast.

Last year, Pearce gave a shamefully-overlooked performance in The Rover. It was a powerful, internalized character, and Pearce’s performance in Results couldn’t be any different, which is another reminder that the Aussie is one of the finest actors out there. Pearce and Bujalski make Trevor more than your average romantic comedy lead — he’s a guy with insecurities, dreams, and more. The same goes for Smulders and Corrigan. As a character and performance piece, Results is strong; it’s the story that needs more polish.

Plenty of other performances bring life to Bujalski’s film. Ribisi plays a good piece of slime, while Hall and Decker have a playful chemistry together. Decker continues to show her talent extends beyond modeling: she’s hilarious in The League; has some fun in Stretch; and, with Results, shows she can do more grounded work. At the end of the day, it’s a convincing cast that makes Results overcome its somewhat weak narrative.

Results premiered at Sundance Film Festival and will be released by Magnolia.