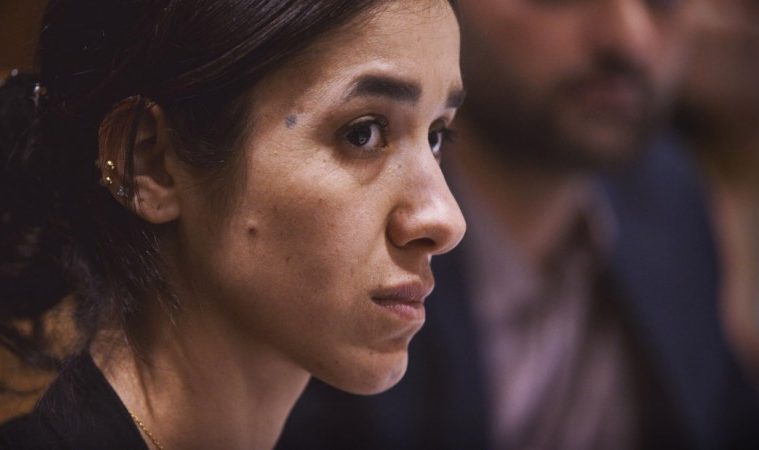 Sundance Review: ‘On Her Shoulders’ is an Inspiring Portrait of Heroism in the Public Eye

Chronicling the making of the United Nation’s first Goodwill Ambassador for the Dignity of Surviving Victims of Human Trafficking, Alexandria Bombach’s On Her Shoulders is the story of Nadia Murad, a Yazidi activist and former ISIS captive working to share her story. The film is a stirring call to action as Nadia’s story is rehearsed, strategized, and packaged by allies, including human rights attorney Amal Clooney who works to hold the Islamic State accountable for their crimes against the Yazidi.

Bombach’s approach to the material keeps its distance. It’s not an aggressive fly on the wall documentary chronicling Murad’s struggles. Rather than have Murad recount her painful story on screen – her family murdered, she forced into sex slavery as a teen – director-editor Bombach intercuts the telling of this story as Murad is cruelly forced to recount the pain in interview after interview.

On Her Shoulders focuses rather on the present work of activism as Nadia works to get camera ready, practicing speeches as the unit around her, including Murad, work to coordinate the telling of the narrative. It’s a frank look at the creation of the narrative and the geopolitical quagmire they occasionally find themselves in, traveling in Europe from refugee camp to refugee camp. Bombach leaves emotional breakdowns off-screen, profiling instead the task at hand as Nadia accepts her role in calling attention to plight through staged media appearances and backroom diplomacy. The end game isn’t always clear, either. When the couple travels to Greece to visit with Luis Moreno Ocampo, the first Prosecutor of the International Criminal Court and an expert on human rights abuses, he encourages her to return home as a crusading force against ISIS.

In Canada she relives her horrific story in shocking detail on CBC radio while finding allies in Parliament including a Conservative MP, Michelle Rempel, who vows to make Yazidi admission a priority. In the U.S. she finds a sympathetic ear in Samantha Powers, the former United States Ambassador to the United Nations under the Obama administration and the subject of the documentary The Final Year about an administration that tried, although unsuccessfully, not to turn a blind eye to the refugee crisis.

Direct and effective, On Her Shoulders offers no easy answers, dedicating itself to the Yazidi people. It’s not a straightforward documentary on the crisis nor is it truly a character study of its subject. Yet what it does is pull back the curtain on the work that needs to be done to call attention to the atrocities perpetrated by ISIS. What emerges is a portrait of an ecosystem, from Ahmed Khudida Burjus, director of Yazda to state and NGO advocates, each encouraging Murad to tell her story to help others in power understand. On Her Shoulders is an essential documentary about an inspiring young woman and allies that still have a lot more work to accomplish.

On Her Shoulders premiered at the 2018 Sundance Film Festival and opens on October 19.